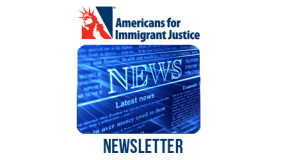 AI Justice, a member of Detention Watch Network, is part of a coordinated national effort – aptly titled “Expose and Close” – to expose conditions at the ten worst detention centers in the nation and work toward closing them. Florida’s Baker County Jail, which houses Immigration and Customs Enforcement (“ICE”) detainees, was identified as one of these facilities. AI Justice has taken the lead in the Baker County Jail campaign.

In July, AI Justice filed suit against Baker County, Florida and the Baker County Sheriff for their refusal to respond to a public records request submitted by AI Justice in March. The request sought documentation regarding the treatment of immigrant detainees and, in particular, the potential sexual abuse of female immigrant detainees by a Baker County Jail correctional officer. The officer was arrested and indicted earlier this year for sexual abuse of criminal detainees at the jail. Shortly after the suit was filed, the County suddenly produced many of the requested documents, though not all, so the suit will continue. Under the public records law, AI Justice will be able to recover attorney’s fees as a result of the County’s improper withholding of the documents. AI Justice will continue to press for full disclosure of the facts about detainee treatment in this facility and will fight to end its use by ICE.