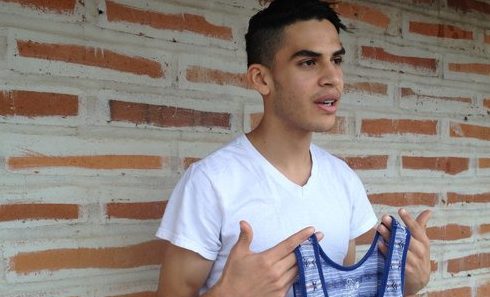 By Cindy Carcamo and Richard Simon

TUCSON — For months, even in the 100-degree-plus desert heat, Alejandro Castear always grabbed a heavy sweater when he left his southern Arizona home.

The sweater wasn’t to wear, he says, but to fend off chilling memories of his time in a freezing detention center for people suspected of being in the U.S. illegally.

Castear says he experienced what immigrant rights groups say is a common practice — detaining immigrants in frigid cells to pressure them to agree to deportation. Among immigrants, the cells are pejoratively called hieleras — Spanish for iceboxes.

Castear can imagine the cold even now. “The more I think of it, the colder it gets,” said the 19-year-old, who was permitted to stay in the country temporarily after the Obama administration initiated a two-year reprieve from deportation for some young people in the U.S. illegally.

One immigrant rights group, in complaints filed against U.S. Customs and Border Protection, asserts that the cells are so cold that some detainees’ lips and fingers have turned blue, including those of a 30-year-old woman at a Texas facility this year. “Because of the cold, she and her sisters and her sister’s child would huddle together on the floor for warmth,” one complaint says.

Andy Adame, a spokesman for the U.S. Border Patrol, denied that thermostats were purposely turned down. Cells are regularly kept at 70 degrees, he said, and solar blankets are given to detainees who ask for them.

“Our agents and officers take great care to provide for the comfort and well-being of all those in our custody, and our facilities are designed and maintained in accordance with applicable laws and policies,” Brabble said in a statement.

Immigrant rights activists concede they don’t have temperature readings as proof, but they say their anecdotal evidence is considerable and persuasive.

“Most tellingly, this term hieleras, Spanish for freezer or icebox, it’s used by the CBP officers themselves. Our clients didn’t come up with this,” said Joseph Anderson, director of litigation for Americans for Immigrant Justice.

Two California Democrats, Sen. Barbara Boxer and Rep. Lucille Roybal-Allard of Downey, are pushing legislation to establish standards for the treatment of immigrants held in Customs and Border Protection facilities.

Roybal-Allard’s Protect Family Values at the Border Act would, the congresswoman said, “establish clear standards for the humane treatment of migrants.” The bill includes a requirement for “climate control that achieves a reasonable indoor temperature.”

Boxer plans to introduce separate legislation. “No human being held by United States authorities should ever be exposed to hunger, extreme temperatures, physical or verbal abuse or denial of medical care,” she said.

Neema Guliani, legislative counsel in the American Civil Liberties Union’s Washington office, said the legislation had “shed the light on a practice that’s been somewhat in the shadows.”

But in the immigrant communities along the U.S.-Mexico border, the hieleras are well known.

Nine young adults who call themselves “Dreamers” — they were brought into the U.S. as children and are now here illegally — had such cells in mind when they staged a protest against U.S. immigration policies at the border crossing in Nogales, Ariz., in July. According to Mohammad Abdollahi, organizer with the National Immigrant Youth Alliance, the protesters dressed in long-sleeve shirts in case they ended up at a frigid detention facility. And they did.

Abdollahi said he was held in such a facility last year. He had long sleeves, and guards gave him a “tinfoil-like blanket,” but he was still cold. “You just can’t think straight. You want to just get out of there,” he said.

Lydia Guzman, an immigrant rights activist in Phoenix, said she knew of one detainee who wrapped his arms in toilet paper in an effort to keep warm.

“There’s no question that they’re using this as a mechanism to unlawfully force people to agree to be immediately removed,” said Anderson of Americans for Immigrant Justice. His group has yet to receive a response to its complaints and expects to file a lawsuit.

The bills advocated by Boxer and Roybal-Allard cover many issues concerning treatment of detainees, including overcrowding and medical care. Both measures would require facilities to be inspected at least once a year, with the results made public.

The legislation’s fate is likely to be tied to that of a broader overhaul of immigration laws, which faces uncertain prospects in the Republican-controlled House. It is caught in the debate over whether to grant a pathway to citizenship for people in the country illegally.

Nonetheless, Jennifer Podkul, senior program officer at the Women’s Refuge Commission, is hopeful and notes that the legislation could be considered separately.

At issue are facilities for short-term detention, which one activist said usually means less than 72 hours. Some detainees agree to be sent back across the border, while others who contest deportation are sent to other facilities for longer stays.

Castear was detained last summer when he was stopped near Wilcox as he returned home to Tucson after dining with friends in Bisbee.

Castear, who was 5 when he came to the U.S. legally before overstaying his tourist visa, said he was detained in a facility that was so cold that he hunched over in a fetal position in attempt to keep warm. Sometimes he rubbed his arms or shoved his hands between his tightly pressed legs.

He didn’t request a blanket because he had already asked to place a phone call to his mother in Tucson and didn’t think he could ask for more than one favor, he said.

He never got to make that call. After refusing to consent to deportation, he ended up at the Customs and Border Protection station in Tucson.

It was just as cold there, Castear said, despite being packed in with about 50 other men in a cell. He said he was given a blanket that “smelled like sweat and dirt,” but he could not stop shivering.

Carcamo reported from Tucson, and Simon from Washington.