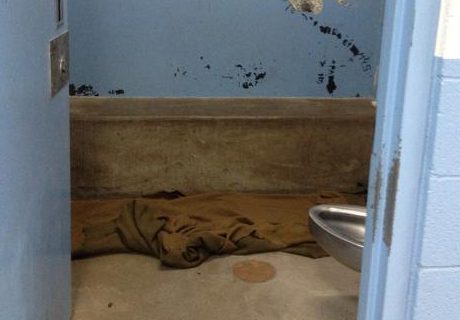 Scores of undocumented migrants who found themselves in detention near the U.S. border have told Miami lawyers the same story of being held in cells kept inhumanely cold.

What Sofía remembers most about her stay in a small holding cell in a detention center near the Mexican border is how cold it was. But she also remembers being hungry most of the time, and not being able to take a shower or change her clothes.

“It was traumatic being there,” said Sofía. “It was like torture.”

Sofía — who did not want her last name used — is one of hundreds, perhaps thousands, of undocumented immigrants being held for days at a time in small holding cells of crowded immigration detention centers along the Mexican border who have complained about conditions at the facilities. After a stay at the border-area detention sites, some of the immigrants are then transferred to more comfortable facilities elsewhere in the country, including the Broward Transitional Center (BTC) in Pompano Beach.

Sofía, 27, is one of more than 200 such detainees encountered by attorneys from the Miami-based immigrant rights organization Americans for Immigrant Justice at BTC over the past year who have provided information about conditions in the border-area holding cells, widely known in Spanish among Central American immigrants as “ hieleras,” or iceboxes, because of the low temperatures caused by air-conditioning running on high.

Typically, immigrant-rights activists say, the holding cells have a toilet, a sink, no shower and no bed. Also, detainees generally only get three bologna sandwiches — one for breakfast, one for lunch and one for dinner, activists and former detainees say.

Conditions at the border area holding cells have been an issue for immigrant-rights activists and attorneys. Americans for Immigrant Justice, for example, has filed a formal complaint against Customs and Border Protection (CBP), the Homeland Security immigration agency that operates the facilities. And two federal lawmakers, Sen. Barbara Boxer and Rep. Lucille Roybal-Allard, both California Democrats, are seeking to improve detention standards at the border-area installations.

Joseph Anderson, director of litigation for Americans for Immigrant Justice, has outlined Sofía’s case and other cases of undocumented immigrants who endured stays of several days at the border-area sites that otherwise appear designed to detain people for only a few hours, rather than days.

“CBP calls them holding stations or holding rooms,” Anderson said. “They are not designed to stay for a while. According to CBP’s own standards, ideally, people should be there no more than 12 hours. In fact, what’s happening is they are keeping people in these places for days at a time.”

Sofía said she was held for 13 days in three different cells at a border-area detention site.

Mohammad Abdollahi, an Iranian youth, said he was held less than 24 hours in a similar room at a detention facility in Arizona just north of the Mexican border in 2012. Abdollahi later was released and traveled to South Florida, where he became a prominent immigrant-rights activist and organizer with the group National Immigrant Youth Alliance (NIYA). Abdollahi has since returned to Arizona and is now a leader in the group DreamActivist, seeking to persuade the U.S. government to allow immigrants who have been deported to return if they have close relatives in the United States.

“It was super cold in the room,” Abdollahi recalled. “And there were 60 people in a room, packed, and it was still cold, like the air-conditioning going on all the time, never pausing.”

Anderson said immigrant-rights activists believe the holding cells are deliberately kept cold and immigrants purposely made uncomfortable as tactics to pressure them into signing documents that enable immigration authorities to kick them out of the country quickly.

“Our take is they do it on purpose,” Anderson said. “Our clients say CBP officers have told them, ‘We are taking you to the freezer, and you’re going to stay in there until you learn that you should not come to this country or until they agree to waive all of their rights and get expeditious departure.”

The Miami CBP office did not provide a comment on the hieleras requested in an email message from el Nuevo Herald. But CBP officials in states along the Mexican border have denied allegations that the rooms are either cold or deliberately kept cold, and immigrants denied amenities so they agree to be deported.

Andy Adams, a Border Patrol spokesman, told the Los Angeles Times in December that cells are kept at 70 degrees and that blankets are provided if detainees request them. Separately, a CBP spokesman was quoted as saying: “Our agents and officers take great care to provide for the comfort and well-being of those in our custody, and our facilities are designed and maintained in accordance with applicable laws and policies.”

However, dozens of undocumented immigrants interviewed by el Nuevo Herald and other news organizations, and by immigration attorneys, tell consistent stories about the hieleras.

Also, more and more undocumented immigrants are telling similar stories because there is a new surge of Central American migrants now crossing the Mexican border after a decline in border arrests in recent years.

Sofía was among the more than 400,000 undocumented immigrants who crossed the border in 2013.

In general, Mexican undocumented migrants are returned to their home country within hours or a few days. But Central Americans like Sofía cannot be deported immediately and are generally turned over to Immigration and Customs Enforcement (ICE).

Once the Central Americans are turned over to ICE, the agency transfers them to its own detention centers — including BTC in Pompano Beach — where conditions are more comfortable.

After Sofía was moved to BTC, she was interviewed by staff members from Americans for Immigrant Justice, whose attorneys now represent her. She was released and is now seeking asylum.