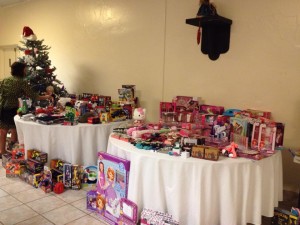 AI Justice, along with American Immigration Lawyers Association-Miami Chapter, and The Dade County Bar Association, hosted a holiday party with food, music, fun, and gifts for close to 160 children ranging in age from 4 to 18.  Volunteers and generous donors treated these children in local immigration shelters to their favorite dishes from their home countries and other festive holiday traditions.

AI Justice’s Children’s Legal Program team worked hard to organize and plan the event. They were overwhelmed by the generosity of so many and were thrilled to be able to present the children with hundreds of donated gifts.

We would especially like to thank the following donors and volunteers for giving so generously of their time and resources to this special event: