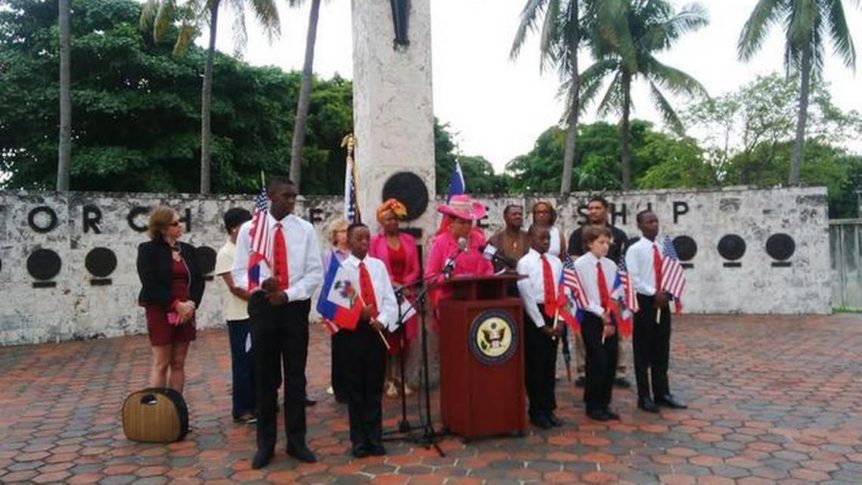 South Florida immigration and Haitian activists vowed Tuesday to closely monitor a new U.S. immigration policy that will allow thousands of Haitians who are eligible to receive a green card in two years to wait it out in the United States with relatives.

At the same time, activists said they will continue to urge the Obama administration to increase the number of Haitians — about 100,000 now in the U.S. visa backlog — who are eligible to legally come to the United States to join U.S. Citizens and lawful permanent resident relatives.

“We are going to be very vigilant,” said Marleine Bastien, executive director of Fanm Ayisyen Nan Miyami/Haitian Women of Miami. “We are very disappointed by some of the restrictions, but at least it is a first step in the right direction.”

After a nearly five-year battle by activists with bipartisan support from U.S. lawmakers, the Obama administration announced Friday that it will implement the Haitian Family Reunification Parole (HFRP) Program beginning next year. The program accelerates the reunification of eligible family members of U.S. citizens and lawful permanent residents, who are living in Haiti and have already been approved for a family-based immigrant visa.

Activists first waged the battle to speed up the legal flow of Haitians following Haiti’s devastating Jan. 12, 2010 earthquake that left 1.5 million homeless, more than 300,000 dead and an equal number injured.

“Frankly, we did not think it was going to be an uphill battle because there was a similar program in place for Cubans,” said Cheryl Little, executive director of Americans for Immigrant Justice.

The Department of Homeland Security says the Haitian program is fashioned after a similar program for Cubans, where the U.S. has agreed to grant at least 20,000 annual visas. Little said she intends to find out. With an estimated 5,000 Haitians who could benefit, she wants to know how many Cubans legally migrated to the United States under the program and if there are restrictions.

“It’s an extremely limited victory,” Little said of the Haiti program. “For some number of Haitian families, this is going to mean the world to them but for Haitians family members who aren’t covered by the restrictions in this announcement, they’re going to continue to suffer in Haiti and my concern, too, is that desperate Haitians are going to risk their lives on the high seas trying to get here to join loved ones after waiting years and years to come legally.”

DHS has said anyone who attempts to come to the United States illegally will not benefit.

The news has renewed hope among Haitians, who in recent days have flooded the offices at Haitian Women in Miami seeking additional information.

“It’s good to know that sometime in the near future, I could have all of my family here with me,” said Eddy Pierre, who applied for his adult son 10 years ago.

With the policy announcement coming just weeks before the vote in Florida’s tightly contested governor’s race, some have speculated that the timing was aimed at boosting votes for Gubernatorial Democrat challenger Charlie Christ. Others think it could be a prelude to President Barack Obama’s promise to fix the country’s broken immigration system by executive action.

U.S. Rep. Frederica Wilson, D-Miami Gardens, said she doesn’t believe the elections were a factor and the initiative was not “boggled down in an immigration reform bill.”

“It was a standalone set aside that the president could manage through Homeland Security without any executive orders,” she said.

Wilson said her office will monitor the policy as it moves forward to make sure there is equity.

Wilson hailed the decision as a “testament” to groups working together. The push had attracted at least 80 pieces of support from diverse groups ranging from immigration and Haitian rights organizations, to the NAACP, Miami-Dade County Commission and South Florida Congressional delegation, to HIAS, a global Jewish nonprofit that advocates on behalf of refugees.

Recalling her own letters to Obama, Wilson said she was especially moved to keep fighting after a trip to Haiti this year, where she saw the continued “despair.”

“This program will reunite children with parents, and husbands with wives,” said Wilson, noting that it is also “critical to Haiti’s economic development and recovery.”