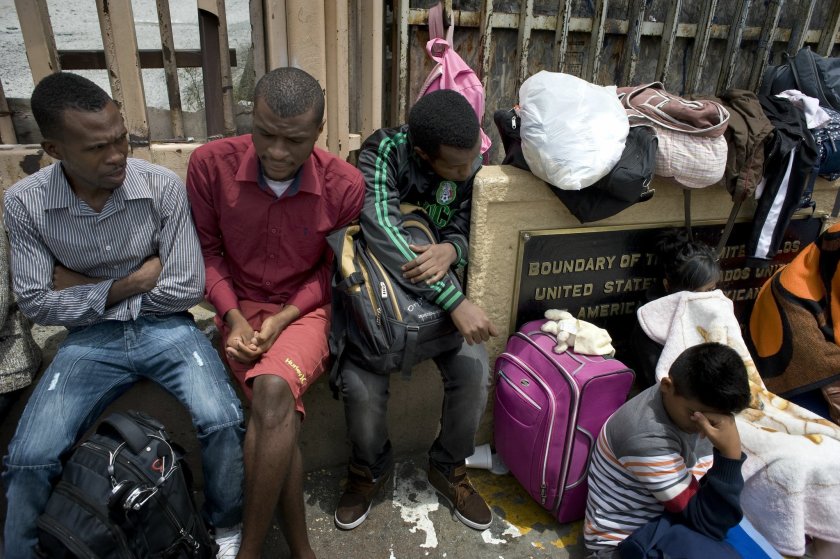 SAN YSIDRO — Surging numbers of Haitians and migrants from other countries have been arriving at the San Ysidro Port of Entry in recent days, hoping for admission to the United States. Early Thursday morning, more than 200 people were crowded inside the port’s pedestrian entrance as they awaited processing by U.S. Customs and Border Protection.

Men, women and children were huddled together, sleeping under blankets on the center’s tile floor, while lines of pedestrians continued stepping through to the United States. Outside the facility in Tijuana, about two dozen people gathered in the open air, waiting to be admitted — a group that included Haitians, Mexicans, and French-speaking men who said they were from the Congo.

While asylum seekers routinely present themselves to authorities at U.S. ports of entry, the reasons for the recent spike were not clear.

Among those waiting outside was a man who gave his first name, Cédric, and said he was a 25-year-old mechanic from the Haitian capital of Port-au-Prince who had been working in São Paolo, Brazil. “I have left my country to look for a better life, like a lot of people,” he said in French. He did not provide details as to how he had arrived at the border, except to say that he flew into Tijuana.

Another man, who did not give his name, communicated in broken Portuguese and Haitian Creole that he had left Haiti in 2013 for work in Brazil. To get to the San Ysidro border, he had crossed through several countries, including Ecuador, Colombia, Panama, Nicaragua, Honduras, Guatemala and Mexico. He said he was not seeking political asylum, but was searching for a better life.

CBP did not authorize interviews or photographs inside the facility, where inspectors on average process close to 25,000 northbound pedestrians a day.

A statement issued Thursday by the agency said, “recently, we have seen an uptick in the number of Haitians arriving at San Ysidro with no status in the United States.”

The Haitians “are being processed on a case-by-case basis,” according to the statement, and those with no status to enter the country are placed in removal proceedings “according to their situation.” They are then placed in the custody of U.S. Immigration and Customs Enforcement (ICE), which makes an initial determination as to their admissability into the United States.

Haitians have traditionally crossed to South Florida in rickety boats risking treacherous waters to get to the United States. They are often intercepted by the U.S. Coast Guard and returned to Haiti.

“Very few Haitians make it to dry land,” said Cheryl Little, a Miami immigration attorney who has worked extensively with the Haitian community in South Florida.

After Haiti’s devastating 2010 earthquake, Brazil welcomed large numbers of Haitians, providing them with work papers, said Little, who is executive director of Miami-based Americans for Immigrant Justice. But some of the Haitians have been leaving Brazil after encountering hard times there, she said. The South American nation is enduring one of its deepest recessions in years.

In Tiuana, merchants near the border crossing said they began seeing a significant spike in the number of migrants walking up to the port without immigration documents last weekend. “There have been so many people, since Sunday,” said Yuleni Pérez, who sells newspapers. “There are some that don’t even have a blanket to cover themselves.”

The head of the Tijuana office of Mexico’s National Migration Institute, Rodulfo Figueroa, said that in some cases, the migrants claim to be from non-European countries in Asia and Africa with whom Mexico has no diplomatic relations, and thus cannot be deported.

In these cases, the migrants are typically released from immigration custody, and given a set period of time, often about 20 days, to leave the country or else legalize their status by launching a political asylum application or other means.

Without addressing a specific case, Figueroa could not say whether the migrants arrived on their own or through smugglers. “It’s a mixed bag. I’m sure some are connected to smuggling networks, but some are not.”

Figueroa said the situation is temporary, and the result of CBP receiving more asylum requests than it has the capacity to process in a short time period. In the meantime, migrant shelters, the city government and the federal migrant protection unit, Grupo Beta, have offered assistance to the group.

CBP is using the old Customs facility at San Ysidro to process the migrants, said Jackie Wasiluk, an agency spokeswoman. In the interim, Mexicans and other tourists needing an I-94 form — for U.S. visitors who are traveling more than 25 miles from the border — are temporarily being directed to the Otay Mesa Port of Entry, she said.

After an initial processing by CBP staff, the ICE officers — from the agency’s Enforcement Removal and Operations division — “are responsible for determining whether they will remain detained or released while their immigration cases undergo further review by the immigration courts,” said ICE spokeswoman Lauren Mack.
http://www.sandiegouniontribune.com/news/2016/may/26/haitians-flood-san-ysidro-port-entry/?#article-copy