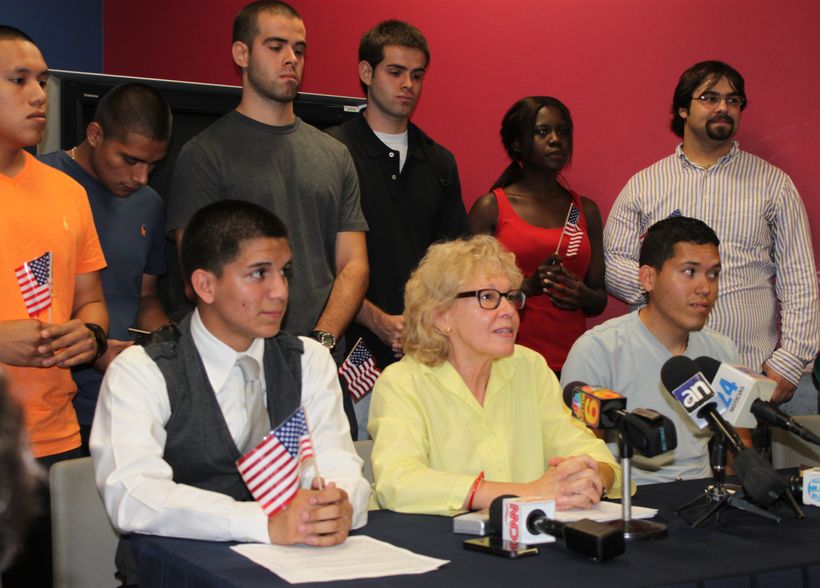 On election night I sat with several bright, energetic and hardworking young immigrants, each with boundless promise, who broke down and sobbed uncontrollably. It was heartbreaking. Since the election our phones have been ringing off the hook with calls from immigrant youth terrified that they’re about to be deported. Countless kids all across America have lost hope that their dreams of living freely and openly in the only country they call home will ever come true.

Instead, they have been painfully reminded of what their life in America was like before President Obama implemented the Deferred Action for Childhood Arrivals (DACA) program in 2012: fearing a police knock on the door, a rushed good-bye to family and friends….weeks or months in detention…then abruptly being shipped away to a country as foreign as Mars.

Some 65,000 students graduate high school each year and face bleak prospects, regardless of their talent and potential to significantly contribute to the country they love and call home. Brought to America as children, often as infants, by parents who risked everything to provide their kids safety and a better future, they are as American as any other kids. Every close friend, every tear, every pledge of allegiance has been in the United States. While DACA has been a lifeline for upwards of 800,000 DREAMer applicants, providing them temporary relief from deportation and an opportunity to pursue their dreams, it is not a path to permanent legal status. Indeed, it can be revoked at any time.

Our President-elect has promised to end DACA on his first day in office, and can do so with the stroke of a pen on January 21st. Rounding DREAMers up wouldn’t be much of a challenge. Every DACA applicant had to provide Immigration officials with their contact information. Recently, Trump has appeared to backtrack, telling reporters they’re “going to work something out” with DREAMers. However, he has not yet reneged on his promise to quickly revoke all of Obama’s executive orders, including DACA.

Meanwhile, Senators Lindsey Graham (R-S.C.) and Dick Durbin (D-IL) are garnering support for the BRIDGE Act, which would preserve key elements of DACA. More than 500 college and university presidents have also urged our country’s leaders to continue and expand DACA, as have several big-city mayors.

While this is welcome news, without the passage of legislation such as the failed “DREAM Act,” these kids will remain in legal limbo, unable to live “normal” lives or fully shine. The initial “DREAM Act” bill was introduced in 2001, and re-introduced over the years.

In January 2010, four of our clients walked 1,500 miles from Miami to Washington DC to promote the DREAM Act and the need for immigration reform. These four “Dream walkers,” as they were called, reflected the aspirations of other immigrant youth who live in two worlds. They did not choose to come here as first-generation immigrants, but most attended U.S. primary and secondary schools and share the same interests and dreams as their US-born classmates. The “Trail of Dreams” gave birth to a nationwide coalition of DREAMers who “came out” as undocumented, and it created a national campaign calling for reform.

Sadly, the 2010 DREAM Act legislation fell just five votes short of passage. If it had succeeded, immigrant youth would now have a reasonable path to citizenship and the ability to maximize their potential. The 2013 bipartisan Senate Immigration Reform bill included the DREAM Act, but never made it to the House floor despite considerable support.

Passage of a DREAM bill is not only morally right, it is just plain smart. It would stop the immense brain drain that occurs when ambitious young people are deported or blocked from achieving their full potential. Were their talents unleashed, these new Americans would earn, spend and invest heavily in the U.S. economy.

Endowed with resilience and a strong work ethic, DREAMers already contribute to our economy and our tax base, balancing our aging population and growing our nation’s GDP. A recent study by the Center for American Progress found that ending DACA would reduce the U.S. GDP by at least $433.4 billion over 10 years. In 2010 the Congressional Budget Office estimated that passing a DREAM Act would over a decade reduce the federal deficit by $1.4 billion, and would increase government revenues by $2.3 billion.

In the aftermath of the November election, when the color of one’s skin or a foreign accent can too easily subject immigrants to abuse and discrimination, the fight for fair, just immigration reform is more critical than ever. We can and should dare to dream that America can achieve meaningful and lasting comprehensive immigration reform that benefits ALL of America. Congress and the new administration need to work on passing the DREAM Act, ideally as part of a comprehensive Immigration Reform package.

It’s time to stop the colossal waste of talent that our country can’t afford by enacting legislation that offers immigrant youth a path to permanent legal status and higher education. Our hope is that our President-elect will not only preserve and extend DACA, but will work closely with both political parties to ensure that these deserving kids can finally pursue their dreams. Hundreds of thousands of DREAMers and millions of U.S. citizens are hoping and praying that he will.