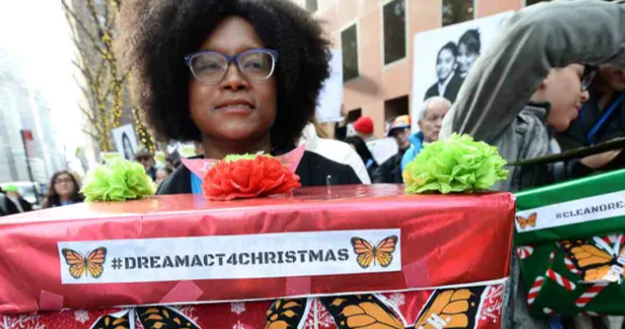 These organizations are fighting the pernicious effects of his administration. Now’s the time to give them a boost.

2017 was just the worst, wasn’t it? But we got out of bed, girded our loins, and got to work—hurray, Alabama! Whether at home or in the developing world, these excellent organizations need your generous help to climb the mountain that is 2018.

§ Indivisible. There are several organizations devoted to winning back our country for Democrats and/or progressives, but Indivisible is the most grassroots-oriented, with 5,800 groups across the country. Some of you may belong to a local Indivisible group already—if not, be sure to put it on your to-do list for 2018. If Indivisible were a right-wing organization, it would be rolling in money from the Mercers, Kochs, and other reactionary zillionaires—but since it isn’t, we have to fill the kitty ourselves. We can do that! secure.actblue.com/contribute/page/indivisibleproject

§ Afghan Women’s Fund. The women of this poverty-stricken, war-torn country still need education, health care, and human rights. The Afghan Women’s Fund, run by the redoubtable expatriate Fahima Vorgetts, builds and maintains schools, distributes school supplies to destitute children, runs literacy and computer classes, and provides nonviolence training for teachers and others. Donations have fallen off in recent years as new causes take the spotlight, but you can help change that. Current goals include constructing a school in Ghazni province that would be the only school building for girls in a 10-mile area. Estimated cost: $150,000. afghanwomensfund.org/donate

§ Canadian Harambee Education Society. This secular-humanist volunteer project funds school fees and support for girls in rural Kenya and Tanzania who have passed the admissions test for high school but cannot afford to go. You can sponsor a girl for $40 per month, follow her progress via letters, and change her life forever. You can also make a donation of any size, which will be combined with others. canadianharambee.ca/donate

§ Dr. Willie Parker Fund for Abortion Access in the South. Paying for an abortion is hard for low-income women everywhere, but especially so in the Deep South, due to restrictive laws, punitive social attitudes, and a severe lack of clinics. The National Network of Abortion Funds has set up a special fund for Mississippi and Alabama patients and named it in honor of Dr. Parker, one of the very few ob-gyns in the region who perform abortions. Your gift can give a woman back her life. abortionfunds.org/introducing-dr-willie-parker-fund-abortion-access- south

§ Edward Said Public Library–Gaza. Earlier this year, I wrote about the efforts of two young Gazans to start an English-language library in Gaza, which has many readers of English but hardly any books. The library is now a reality. Hurray! But it desperately needs operating funds. Their crowd-funder campaign will be live until mid-January, so give right away! indiegogo.com/projects/edward-said-public-library-gaza–2

§ Heather Heyer Foundation. Heather Heyer was the woman killed while protesting the white supremacists marching in Charlottesville, Virginia, in August. After her death, Heather’s mother and her employer co-founded the HHF to promote her progressive ideals. This year, it will award scholarships in her name. Honor Heather’s memory with a donation and help more people be like her. heatherheyerfoundation.com/donate

§ MEDICC. This US-based organization promotes American-Cuban health cooperation and supports students at Havana’s Latin American School of Medicine, including 40 to 60 minority students from the United States every year, most of whom return to serve low-income communities after graduating. Cuba has a very low infant-mortality rate and a life expectancy comparable to that of more developed countries. Universal health care focused on public health works! https://donatenow.networkfor good.org/mediccglobal

§ The Bail Project. Did you know that most people in jail haven’t been convicted of anything? They simply can’t afford bail. That means they can lose their jobs, relationships, health, and more while awaiting trial. This new organization uses 100 percent of your donation to bail people out, and because it’s a revolving fund, your dollars will be reused several times a year as recipients show up for trial and their bail is paid back. In early testing, over 50 percent of recipients had their charges dropped. It’s simple, ingenious, compassionate, fair, and long overdue. secure.bailproject.org/page/contribute

§ Americans for Immigrant Justice. Under the Trump administration, the rounding-up, jailing, and deportation of the undocumented has increased dramatically—and these people have no right to court-appointed lawyers. AI Justice is a nonprofit law firm that works to reform immigration law and provides legal services for immigrants. Bonus: AI Justice helped to kick-start the Dreamer movement as well as the push for DACA. www.aijustice.org/donate

§ Rumi. Afghanistan produces some of the most aromatic saffron in the world. Saffron also happens to be the most valuable spice on earth. Started by US military vets, Rumi provides Afghan farmers with a way to better their lives without growing opium. A pretty glass jar of Rumi saffron makes a perfect stocking-stuffer—except you may just decide to keep it for yourself. rumispice.com/collections/gift-saffron

Read it on The Nation.