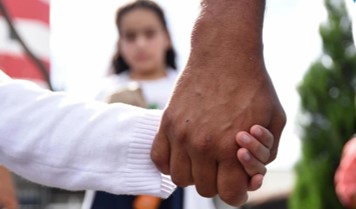 A federal judge has ordered the Trump administration to do everything it can to reunify families separated at the border, but some children and parents remain trapped in different countries.

Ever since he was separated from his eight-year-old daughter almost three months ago, Miguel has been fighting to get her back. She calls him when she can—about once a week, though sometimes weeks pass when he hears nothing—from a shelter for unaccompanied minors in Miami, begging him to have her deported to their native Guatemala, where he was returned just days after they crossed the border into the US.

“She asks me, ‘Papa, how is my case going? I want to be back with you. I’m a child and I didn’t do anything,’ and she cries. I tell her she’ll be home soon, but I have no good answer,” Miguel told me on the phone, his voice trembling. “I’m desperate. Her mother is so upset she fainted. She’s said she’s going to commit suicide.” His daughter keeps asking why she is kept in “prison,” where she never knows if she’ll have the chance to communicate with her family.

Miguel (who requested to use a pseudonym since he fears speaking out could further jeopardize the chances of his reunion with his daughter) has grown desperate and baffled, wondering why his daughter has not been sent home. He has no idea when they’ll see each other again. Despite repeated requests for the past month and a half from Miguel’s attorney to the US Department of Homeland Security that it facilitate the removal, the government has refused to expedite the process, the attorney told me—flaunting a federal judge’s order that all families separated under President Trump’s “zero tolerance policy” for border crossers be reunified by late July.

“Since he was deported we were aware that they wanted to be reunited, and we’re still waiting for a court date for her,” Miguel’s attorney, Jennifer Anzardo Valdes, director of the Children’s Legal Program for the Miami-based Americans for Immigrant Justice, told me. Valdes first requested in June that DHS return the child to Guatemala without a court hearing, since the attorneys had all information showing she was Miguel’s daughter and sought to be reunited with him. But DHS refused, and since then Valdes has been requesting a court date for her—the child must request a voluntary departure before an immigration judge in order to leave the country. The government has not responded. “We’ve explained that the child was separated and that her parent was deported, and the government hasn’t expedited the process at all,” Valdes said. “It’s something they should make happen, especially after the court order.”

Miguel is among hundreds of parents still waiting to see their children after the passing of a federal judge’s July 26 deadline to reunite families deadline to reunite families separated by the government after they crossed the border, a policy that became one of the most controversial and unpopular of the Trump era. Miguel is one of about 400 parents who were deported without their kids. And though last Thursday the federal government argued in a court filing that nonprofits should use their “considerable resources” to find parents and to facilitate reunification, even when NGOs have collected all the missing pieces, as in Miguel’s case, the administration is inexplicably dragging its feet on some reunifications, advocates say.

Staff at the National Immigrant Justice Center told me that the nonprofit was representing four children who had been separated from their parents under Trump’s zero tolerance policy and all were “facing significant delays.”

“These are kids who want to return and their parents want them to come home, because they were essentially tricked and there’s been no effort to our knowledge to expedite the return to their parents,” said Valdes, noting that her organization is working on at least three such cases.

Valdes said Miguel and the other parents were “tricked” because immigration agents promised they would be reunited with their children as long as they signed deportation orders.

“They gave me a form in English and I asked them to explain what it said… and they said it was so I could be deported together with my daughter… but they deceived me,” said Miguel, who speaks only Spanish.

A Department of Homeland Security spokesperson said she could not comment on specific cases without all identifying information of the client. In the administration’s Thursday court filing, it argued that attorneys for the separated parents were responsible for gathering all information to demonstrate that the court’s criteria for reunification were met, including “parentage, parental fitness, criminal history, or child safety.”

On Friday, US District Judge Dana Sabraw denounced the federal government’s claim and said it was the administration, not nonprofits, that had the “sole burden and responsibility and obligation” to make reunifications happen, because “the reality is that for every parent who is not located, there will be a permanently orphaned child, and that is 100 percent the responsibility of the administration.”

For children with deported parents, each step of the reunification process is a new hurdle with new challenges.

“Obviously the first step is finding them and that’s still a major task,” said Lee Gelernt, deputy director of the ACLU’s Immigrant Rights Project, of the parents, who may be hiding in their home countries in fear of the dangerous conditions they fled in the first place.

“We’ve been able to find three [deported] parents, and one of them we found once and then when we called his phone was disconnected, so we haven’t been able to reach him again,” said Efren Olivares, the Racial and Economic Justice Program director of the Texas Civil Rights Project, which has been working on the border throughout the family separation policy.

Attorneys speak with both the parent and child about the best option for the child, whether that means returning home or seeking protection in the US. Occasionally the parent and child want two different things, creating further confusion. The deported father of one nine-year-old Guatemalan boy this summer, for instance, wanted his son to remain in the US—but the boy, who initially wanted to stay in the States as well, changed his mind within two days and asked to be sent home, attorneys from New York Legal Aid recounted.

“The father said he should stay and go into long-term foster care,” Beth Krause, the supervising attorney of New York Legal Aid’s Immigrant Youth Project, told me. “But the child said he wanted to go home.”

The attorneys honored the boy’s request, and are still working to have him sent back to Guatemala. Occasionally, however, a parent wants their child returned home—but the child wants to remain in the US.

“It’s going to cause unbelievable trauma for the children to have to make that decision to decide whether to remain in a country safer for them or to return to their parents,” Madeline Taylor Diaz, a children’s attorney with the Washington DC-based immigration nonprofit Ayuda. “And we’re left to struggle with this ethical dilemma of how to pursue this.”

Most immigration attorneys faced with this conflict will pursue the child’s expressed interest, but New York University law professor Martin Guggenheim, a specialist on children’s rights and family law, said they should actually honor the parent’s wishes in these complex cases.

“They should speak to the clients’ parents and inform them of what the child wants provided the child gives them permission to disclose information and then say to the parent, ‘Tell me what to do,’” Guggenheim said. “The parent hasn’t forfeited her right to her child by being deported—that happened to her by the whim and caprice of the US government.”

Even when there is consensus in the family—as well as an expedited court date to request voluntary departure for the child—the process of returning can take months, said Elizabeth Frankel, associate director of the Young Center for Immigrant Children’s Rights.

“Once there’s an order from a judge the government works to repatriate the child and then DHS and HHS have to work with the consulates,” Frankel told me. “It’s a slow process because so many different government entities are involved and it involves the consulates of different countries.”

As a result, Frankel said, the Young Center is still working to finalize voluntary departures for children who were separated from their parents under the unofficial family separation policy—which began about one year ago. “We definitely have cases now where we know the parent was deported ahead of child and it’s taking a long time to facilitate those returns,” she said.

Meanwhile, for each parent and child waiting, every day is a grueling punishment for coming to seek safe haven in a country where they’d imagined justice and opportunity.

“They told us they were separating us for a short time, to take her to our destination first, in Houston. I never went to court or anything,” recalled Miguel. “There’s not even a reason we’re still apart. I need my daughter.”

Read it on VICE here.