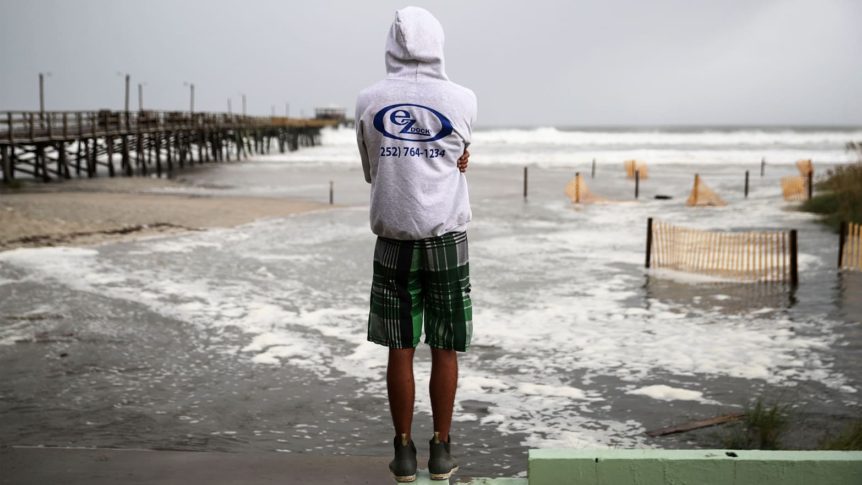 Just days after the one-year anniversary of Hurricane Irma’s landfall in the Florida Keys, Hurricane Florence has left more than one million homes without electricity and caused catastrophic flooding across the Carolinas. If we can learn anything from Hurricane Irma in Florida, it is the need to pay close attention to how detained immigrants are treated before, during, and after such disasters.

A Category 4 hurricane with winds of 130 miles per hour, Irma caused widespread devastation across the Sunshine state. Roofs were ripped off buildings. Homes were flooded. Electricity was out for weeks. And amid this chaos, the story of detained immigrants was lost.

Some 1,900 immigrants—detained by Immigration and Customs Enforcement (ICE)—had to be evacuated from Irma’s path. The evacuations were anything but smooth. In fact, stories collected by visitors at a Krome Service Processing Center in Miami reveal that ICE likely violated a number of its own standards during evacuations.

In the wake of Florence, remembering these stories of neglect may help hold ICE accountable this time around.

“We were fed cold and unfit meals for human consumption”—Elias, evacuated to Louisiana.

Elias said he was one of the “lucky ones” who only spent about 9 hours in processing. Others, he heard, spent up to 48 hours in processing cells before being evacuated. He was transported to Miami International Airport by bus, where, shackled at the wrists, waist, and legs, he boarded a plane to Louisiana. Elias arrived at a county jail near Alexandria and was given a temporary bed in the common area around 2 a.m. Only then was he unshackled for the first time in at least eight hours. He was not processed for days. As a result, he was unable to get medication for an intense migraine that developed during the evacuation.

Elias described his cell at the jail as “slimy” and smelling of mold. He and other detainees were given cleaning supplies to sanitize their own living space. But even after using entire bottles of disinfecting cleaner on the floor and walls, he said the cell felt unlivable.

The food was no better. It’s not that the meals had just gotten cold during the transport to the cells, Elias explained, they were fridge-cold and so disgusting that even cats wouldn’t eat them. It was 19 days until Elias returned to Miami.

Elias’ story is far from unusual. Hours of speaking with detained migrants after Hurricane Irma revealed a dark pattern: detainees were often shackled at the wrists, waist, and legs for more than 8 hours, had little access to safe drinking water or warm food, and were housed in rundown cells for days on end.

Take Francois, for example. Another detainee in Florida, he was first sent to Georgia and then Livingston, Texas. His transfer involved 10 hours of bus and plane rides, all shackled with waist chain, leg irons, and handcuffs—with few, if any, bathroom stops. At one point, Francois recalled, the guards threatened to pepper spray shackled detainees after they demanded a bathroom stop. Luckily, they were talked down by the warden at the last minute.

Francois was not able to contact his family for a week. He was eventually transferred back to Folkstone, Georgia before returning to Florida, where he had to proceed with his immigration case through “tele-court,” a system through which detainees appear in front of a judge via video conferencing. He believes this gravely affected his case, changing his life forever. Other detainees also experienced difficulties with their cases due to delayed paperwork caused by the evacuation process.

These stories suggest that multiple ICE operating standards were likely violated during evacuations. This includes standards on environmental safety, meals, use of force and restraints, and timely processing.

But Elias and Francois are only two of thousands of immigrants evacuated during Irma, and their stories are far from unique. Americans for Immigrant Justice found that even pregnant women evacuated from Broward Transitional Center were subjected to similar treatment, including indiscriminate shackling for extended periods of time and lack of proper access to restrooms.

A recent lawsuit against ICE suggests that these experiences are not extraordinary. Rather, ICE routinely operates in a substandard and dehumanizing way. Such practices can have long term mental health impacts, which are likely only exacerbated by the stressors of a natural disaster. The decreasing transparency of the agency adds to these concerns. Just this week, two long-term volunteer visitors were permanently banned from entering Krome Service Processing Center in Miami. This happened after they participated in protests calling attention to the increasingly dehumanizing treatment of immigrants by the agency in South Florida.

Hurricane Florence caused havoc across the East Coast. As the media covers the aftermath of the storm, the evacuation of detained immigrants must be part of the conversation. ICE has to be held accountable. Or else we’ll only continue to hear more stories like those of Elias and Francois.  Or worst, we won’t even know of these stories. That doesn’t mean they won’t continue to happen.

The stories shared here were collected by volunteers committed to ending immigrant isolation in ICE facilities. Detainee names have been changed for their protection.