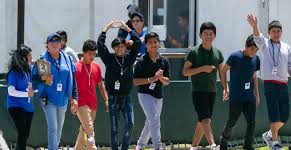 For the kids at the Homestead shelter for unaccompanied migrants, many of whom endured unimaginable hardships on their journey to the United States, life is about to get a lot more austere.

The Trump administration abruptly announced Wednesday it would dramatically cut aid to detention centers that house migrant children who arrive in the United States unaccompanied by their parents. Homestead is the largest of those facilities.

The budget cut means detainees will no longer get recess time, nor access to any sort of education. Going forward, they will no longer be assisted by attorneys, according to the Office of Refugee Resettlement. Officially, children as young as 13 are detained at the center, although a recent court filing suggested kids as young as 8 were held there.

“We have sunken to a new low that I didn’t think was possible in this country,” said Alberto Carvalho, superintendent of Miami-Dade schools. “What next? Reduce food, water and air? I am bruised. I am hurt. I am angry.”

Evelyn Stauffer, spokeswoman for the Office of Refugee Resettlement, confirmed the change, first reported by The Washington Post.

“This week, ORR instructed grantees to begin scaling back or discontinuing awards for activities that are not directly necessary for the protection of life and safety, including education services, legal services, and recreation,” Stauffer said.

Michelle Ortiz, deputy director of Americans for Immigrant Justice., was appalled. “These are children. Even Death Row inmates have access to educational and recreational services.”

The agency said in a statement the changes are a direct result of the “humanitarian crisis at the border brought on by a broken immigration system.” This crisis has put financial strain on the agency’s Unaccompanied Alien Children (UAC) program — a strain that will leave its budget empty by the end of the month, the statement added.

“The law says if you know you are going to run out money, you need to take steps to minimize the amount of money you are going to spend, and that’s what we’re doing,” said Mark Weber, spokesman for the Department of Health and Human Services, ORR’s parent agency.

So what will life look like for the approximately 2,500 kids at the detention center?

Actually, some of the children sleep barracks style, with as many as 144 bunks in the same tent.

“What are the children supposed to do? Will soccer balls and textbooks now be confiscated? How are these children expected to learn, grow, and function in society?” said U.S. Rep. Debbie Mucarsel-Powell, a critic of the administration’s immigration policy. “These are children that are going through tremendous suffering. … They are robbing them of their humanity.”

The budget cuts include money used to pay attorneys who currently advise children, sometimes representing them in court.

“This is a little bit like a government shutdown,” Weber said. “When the government is out of money, it’s mandatory to shut down certain services. Legal representation isn’t a matter of survival so funding won’t be provided.”

Currently the Office of Refugee Resettlement funds the Vera Institute of Justice, a New York-based nonprofit that hires legal service providers across the country to represent unaccompanied youth inside detention centers.

In Florida, the Vera Institute contracts with Americans for Immigrant Justice.

The group’s mission is to offer “know-your-rights” presentations and legal screenings to every child in his or her native language. The organization ultimately ends up representing a large portion of the kids.

“We are deeply troubled that any services are being cut for children, who are among the most vulnerable population of immigrants in detention,” Kica Matos, director of the Vera Institute’s Center on Immigration Justice, told the Herald Wednesday. “We are also deeply concerned about the lack of funding for ORR and how it might impact a much-needed range of services that are so desperately needed right now.”

Educational services definitely will not continue. The children have been attending classes Monday through Friday from 9 a.m. to 4 p.m. The curriculum includes not just language instruction but science, social studies, math, reading, writing and physical education.

The classes are taught by non-certified instructors working under the supervision of certified teachers, according to federal officials. Remedial education and tutoring have also been offered.

Since the camp opened, the Miami-Dade school district has offered to take the lead in teaching the detained children. The district already does so at two smaller facilities — Boystown in Cutler Bay and His House in Miami Gardens.

“As a matter of equity, there is no real debate that district-run educational services would be more appropriate for children, especially those whose shelter stay is comparable to a full K-12 grading period.,” Carvalho wrote last week.

Carvalho has not received a response from HHS. He said Wednesday he will “redouble my efforts” to get one.

It’s not clear how quickly the resources will be cut off. Weber didn’t know whether organizations would be allowed to donate their services after the government cuts off the money.

Last week, 705 pages of court documents were filed by lawyers who spent substantial time inside Homestead’s detention center for unaccompanied minors. The documents painted a portrait of migrant children subjected to “prison-like” regimens, potentially sustaining permanent psychological damage due to isolation from loved ones for long periods of time.

Caliburn, the company that operates the shelter, told the Miami Herald Wednesday that its “top priority at the Homestead emergency care shelter remains the safety and welfare of the children.”

“That is why we will ensure the continuation of our high level of care,” said CEO Jim Van Dusen, without elaborating on what that means.

The camp was opened by the Obama administration during a spike in migrants showing up at the border but it was closed not long after. The Trump administration reopened it in February 2018.

In April, Caliburn got a new, no-bid contract for $341 million to operate the shelter through November.

Since the camp reopened, roughly 12,000 minors have been cycled through the center, with 9,700 having been discharged.

Joshua Rubin, a protester who has camped outside the shelter off and on for months, said the government could solve its resource problem by speeding up the process of placing the migrant children with relatives and others who are willing to care for them. It costs about $750 to care for one child for one day at the camp.

“What are they going to do next? Cut back on the food? On the medical services,” Rubin said. “These kids are bursting with restless energy, and they are not gonna know what to do with themselves.”