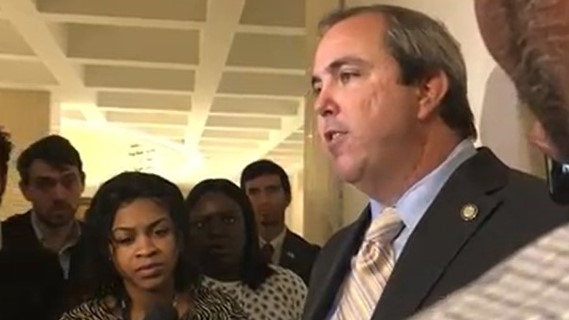 But South Miami, a city of approximately 12,000, accounts for a tiny fraction of Florida’s 21.3 million people. It’s smaller than most of Miami-Dade’s municipalities. And its mayor, Philip Stoddard, maintains that it is not a sanctuary city, and that there are no sanctuary cities in Florida.

So why is the city challenging the governor?

Stoddard says that it is a matter of maintaining public safety in South Miami. Nearly half the city’s residents identify themselves as being of minority descent — 43.1 percent Hispanic or Latino, 17.8 percent black or African-American, and 4.8 percent Asian descent — groups that the lawsuit says are targeted by the law, which passed the Legislature this spring as SB 168.

“Police departments across the region see their jobs as keeping the residents safe,” Stoddard said. “As soon as you start making some residents suspicious of the police, then they can’t do their job.”

SB 168 requires local law enforcement to honor federal detainer requests, which ask that police detain immigrants arrested for other reasons if agencies have probable cause to believe the immigrant could be deported. South Miami adopted a resolution in 2017 stating that detainer requests will not be honored by South Miami Police. The resolution may put South Miami out of compliance with SB 168, city leaders say, leaving the city vulnerable to lawsuits by the state or residents of South Miami.

The South Miami Police Department has never been issued any detainer requests, according to Rene Landa, its public information officer.

“We’re not trained to do the function of ICE,” Landa said. “We’re not here to enforce immigration rules.”

The lawsuit, which was filed in U.S. District Court, says the new law requires state and local law enforcement to perform the functions of federal immigration agents and encroaches into an area of exclusive federal authority.

The lawsuit was filed on behalf of the Florida Immigrant Coalition and either other organizations, all of them nonprofits; South Miami is the only municipality that is suing.

The city of Coral Gables is currently reviewing the suit at the request of Mayor Raúl Valdés-Fauli, according to city attorney Miriam Ramos, but will not take any action until after its city commission meeting on Aug. 27.

Representatives of the Southern Poverty Law Center, which is representing the plaintiffs, declined to comment on why they approached South Miami, or whether they approached other jurisdictions before filing the suit on Tuesday.

As a liberal-minded city that “isn’t afraid of controversy,” South Miami is poised to challenge the state of Florida in court, said Sean Foreman, a Barry University political science professor. In the past, South Miami has fought the state on its plans to erect power lines along U.S. 1.

But without any detainer requests, Foreman suggests that the lawsuit may be “more symbolic than one that deals with actual problems on the ground.”

If South Miami were to receive detainer requests in the future, however, Pepe said the law is too vague for police officers to understand what their duties are.

The 72-page suit hinges on the claim that SB 168 was composed by what the Southern Poverty Law Center calls “hate groups,” Floridians for Immigration Enforcement and The Federation for American Immigration Reform, aiming to target minorities and unlawfully “supplant” federal immigration authority. The lawsuit says that those groups recruited lawmakers to turn their agendas into law and claims that DeSantis “ran for office on an anti-immigrant platform.”

The suit accuses pro-enforcement groups of coordinating with the bill’s sponsors, Rep. Cord Byrd (R-Neptune Beach) and Sen. Joe Gruters (R-Sarasota), to push an intentionally vague bill they wrote to the governor’s desk.

Gruters, who calls the bill the strongest sanctuary ban in the country, says the plaintiffs’ intentions are to protect illegal immigrants. He denies that he or Byrd coordinated with pro-enforcement groups, instead asserting that SB 168 is identical to a bill drafted in previous years by Judge Larry Metz, a circuit judge in Lake County and a former member of the state House.

“They are purposely misrepresenting the letter of the law and putting the interests of criminal non-citizens over those of law abiding citizens,” Gruters said. He called the suit “reckless and irresponsible” in a press release.

The governor’s office, meanwhile, “looks forward to vigorously defending this law in court,” said his spokeswoman, Helen Aguirre Ferre. Moody is “ready to defend the constitutionality” of the ban as well, spokeswoman Lauren Schenone said.

The Immigration Clinic at the University of Miami’s School of Law as well as the Community Justice Project are also representing plaintiffs, which include the Florida Immigrant Coalition, Farmworker Association of Florida, WeCount!, Americans for Immigrant Justice, Hope Community Center, QLatinx, The Guatemalan-Maya Center, the Westerminster Presbyterian Church United and Family Action Network Movement. Each claims that SB 168’s passing has caused a diversion of its resources to dispel misinformation and field calls from concerned immigrants.