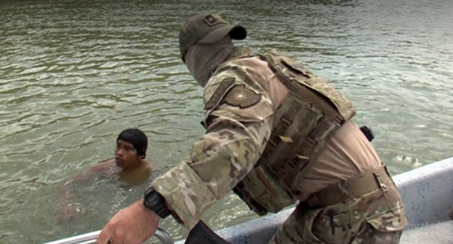 Growing up in extreme poverty with gang violence nearby in Quetzaltenango, Guatemala, 16 year-old Jenny (not her real name) said she always knew she wanted a better life and anxiously wanted to reunite with her parents. They had left for the US when she was a year and a half.

The one-room adobe house she lived in with her grandparents just had electricity connected 10 years ago and they subsisted with food they cultivated on their land. Now that Jenny’s grandparents are older, it was becoming difficult for them to care for her and she was too young to live on her own. That’s when she decided to make the trek North and reunite with her parents in Homestead, Florida – a major agricultural area located near Florida’s southern tip.

Jenny is one of the tens of thousands of children who have crossed the border into the U.S. from Mexico during the past several months, prompting government officials to open emergency shelters in military bases in Texas, California, and Oklahoma. But away from the areas where the government has focused its resources, the wave of children is impacting cities with large immigrant populations such as Miami – even as the number of kids crossing the border appears to be falling.

Miami is one of 4 metro areas with the largest number of children released to sponsors, who are mainly parents or other relatives. As a result, some local non-profit organizations have been scrambling to assist families who have sought their help with issues such as filling out paperwork, enrolling in schools, and legal assistance for the newly arrived children.

As soon as a social worker contacted Jenny’s parents from the shelter she was at in Oklahoma, the parents reached out to a local Homestead organization called We Count! The staff helped the parents fill out about 16 pages of paperwork required by the US government in order to relocate Jenny. Local notaries or “notarios” in the area would have charged them between $800 and $1200 to fill out, said the family.

“She dreams of studying and becoming somebody. She does not want to be like us,” said Jenny’s mother to NBC News, happy she is now reunited with her daughter. The parents are farm workers in the Homestead area.

Jenny (not her real name), with the dotted dress, recently crossed the border from Guatemala. She is shown with her parents and siblings as they meet with Jonathan Fried at the organization We-Count! in Homestead, Florida. The organization has helped with the family’s reunification. This was one week after Jenny’s arrival from a shelter in Oklahoma.

On a Thursday evening, one week after Jenny’s arrival to Homestead, she sat nervously with her parents and 3 younger sisters (all born in the US) waiting to meet with an attorney at We Count!.

Since its inception in 2006, We Count! has helped unaccompanied minors. But during the past few months the agency has seen a huge increase. “It’s gone from a small stream to a roaring river,” said Jonathan Fried, Executive Director, of We Count!

The flood of children has come at a time when the organization is extremely short of funds. In fact, they had laid off half their staff and the remaining employees are paid to work only half a day. Yet due to the recent increase in children’s arrivals and family reunifications, the staff have been working long hours.

“This is taking up a lot of our time and we’re not funded to do this – sometimes stuff like this comes up that’s a humanitarian crisis, and you pitch in to do whatever you can,” said Fried.

In Miami, the non-profit organization American Friend’s Service Committee (AFSC) has a specific program to increase awareness on immigration. They too have been flooded with calls from minors.

“Most of the phone calls we receive are from minors and relatives looking for their family members who have been detained,” said Lucio Perez-Reynozo, an attorney with AFSC who began representing kids about 2 years ago for free.

Some Miami non-profit groups say though they are not funded to do so, they are working weekends and evenings assisting families seeking help reuniting with their children who have crossed the border.

Perez-Reynozo said he can’t take all the cases. “Right now I’m working weekends, which I didn’t do before,” he added.

Perez-Reynozo has been looking for attorneys willing to take cases pro-bono. Though some have volunteered,they only take about one case per year. Perez-Reynoso said one of the biggest obstacles is that the US government hires top-notch lawyers for deportation cases and doesn’t provide attorneys for the children.

Two of the minors Perez-Reynozo assisted while they were in shelters after crossing are sisters Melanie and Ana. Their mother, Denia Zelaya, had publicly asked the local press for help after not hearing from her daughters weeks after they left their native Honduras. Recently, the family was reunited.

Twelve year-old Melanie arrived 4 months ago; the family reported she was escaping abuse and gang violence. Seventeen-year-old Ana arrived with her 3 year-old daughter in Miami a couple of weeks ago. According to her family, Ana became pregnant after she was raped by a gang member in Honduras.

Shortly after Ana’s arrival, the family gathered at the Organizacion Hondureña Integrada Francisco Morazan (The Integrated Honduran Organization Francisco Morazan), a non-profit dedicated to helping Honduran and other Latino immigrants navigate through diverse issues in the US.

Francisco Portillo, founder and president of the organization, has been working countless hours to help the children and relatives who walk through his doors daily.

“Sometimes I work from 10am to 3am or 4 am filling out paperwork, preparing for protests,” said Portillo.

The organization has about a dozen volunteers in Arizona and Texas, who go to shelters looking for children who are being sought by their relatives in the US. Very often, families don’t hear from children traveling since their departure from Central America, and they just want to know the minors made it to the US and are safe.

Word of this program has spread, so Portillo now receives calls from people in other states.

“This work is not easy, it has to come from your heart,” said Portillo, referring to the difficult stories he listens to on a daily basis.

Americans for Immigrant Justice (AI Justice) is the only organization allowed to enter the shelters in South Florida and advise the children of their basic legal rights.

“We have been in crisis mode for 2 years,” said Cheryl Little, Executive Director of AI Justice.

The organization has 35 attorneys with a special team that focuses on children. Last year AI Justice provided services to 1600 children. So far this year, they have almost reached that mark.

“We are feeling the crunch,” Little added.

Because immigration law is so complex, it’s difficult to train additional pro-bono attorneys who specialize in other legal areas.

“My concern is that our staff is working around the clock. Children’s lives are in their hands and they will do anything to protect it,” said Little.

One of the reasons AI Justice has been so effective is they have a unique program where they collaborate with 6 community organizations. These include the University of Miami School of Law and Florida International University College of Law. The program, called Immigrant Children’s Legal and Service Partnership (ICLASP), takes a holistic approach to each child’s situation with organizations such as The Trauma Resolution Center and Sisters of the Humility of Mary Service Program.

“From our stand point, it feels like ground zero,” said Little, referring to all the non-profit organizations who are helping unaccompanied minors.