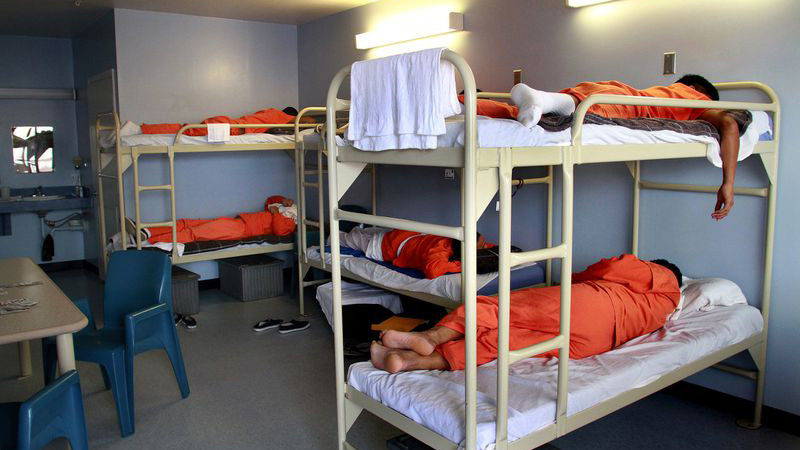 AUG 26, 2019 | 11:25 AM — On the night of his 18th birthday, a Honduras teen known only as “HDSB” in court filings, was shackled, put in an orange suit, and brought to the Broward Transitional Center, an ICE detention center in Deerfield Beach operated by The Geo Group.

His crime? Entering the U.S. illegally to flee gang members who had killed two of his cousins, according to a court petition demanding his release from the detention center and placement with family in the U.S. “HDSB” has had no court hearing since being detained, his lawyers say.

A petition for a court hearing for “HDSB” was filed last week in Southern District Court in Fort Lauderdale by Miami law firm Nelson Mullins, which says that he is one of 23 teens — boys and girls — who were put in a detention center instead of with family or a sponsor, as required by law. Most of the teens were sent to Geo’s Broward Transitional Center.

The teen was released Monday afternoon, according to Francisco Armada, a lawyer with Nelson Mullins. But Armada said ICE’s practice has been to send immigrant teens who are seeking U.S. protection to detention centers and then release them before the matter gets to court.

“ICE is responsible for finding the least restrictive alternative available, and they always opt for prison,” Armada said.

Immigration and Customs Enforcement issued a statement Monday saying, “ICE makes arrest and custody determinations on an individual basis based on the totality of the circumstances and does so in compliance with federal law and agency policy.”

Lisa Lehner, director of litigation for Americans for Immigrant Justice in Miami, said there were about 130 children who were transported from the Homestead detention center and other shelters to detention centers. Many of them ended up at Broward Transitional Center.

“They should have been released to family members or family friends,” Lehner said. After litigation, many of those teens have been released. Those who do not have sponsors are sent to group homes, she said. Lehner said she is still working on the release of two 18-year-olds who fled El Salvador from Broward Transitional Center.

Boca Raton-based Geo, an ICE contractor, claims it has no unaccompanied minors at its centers. But ICE has been moving teens as soon as they turn 18 to detention centers, according to the law firm and the non-profit Americans for Immigrant Justice. “HDSB” was formerly held at the Homestead detention center operated by U.S. Department of Health and Human Services, which is no longer taking children.

Armada said the teen already had a sponsor, a family friend, when he was taken to Broward Transitional Center, which he says has adult criminals.

The lawsuit contends that ICE is “routinely and systematically” failing to comply with legal requirements to “consider placement in the least restrictive setting…” That was mandated by Congress after a class action lawsuit on the matter, Armada said.

Geo is not named in the lawsuit, but the prison company’s chairman and CEO George Zoley has repeatedly told Wall Street analysts on earnings conference calls that the company has “never managed any facilities that house unaccompanied minors.”

“Technically, he’s right,” Armada says of Geo’s top executive. “But they turn 18 and this is what happens.”

Geo, which didn’t immediately respond to a request for comment, is a prison company with $2.33 billion in 2018 revenues. The company recently announced it is embarking on its largest expansion for ICE yet, expected to add $100 million in yearly revenue to Geo’s coffers.

“HDSB,” whose name is not used in the suit because he was a minor when detained, entered the U.S. near El Paso, Texas, around May 20, when he was still 17. He claims to have fled Honduras on April 10 because gang members had killed two of his cousins who refused to join the gang, according to the lawsuit.

On July 2, Americans for Justice filed a petition to have “HDSB” released on his 18th birthday to a family member in Maryland.

Instead, in the middle of the night between July 3 and July 4, ICE cuffed “HDSB’s” ankles and wrists, and paraded him in chains before peers, and then transported to Broward Transitional Center, according to the suit.

The teen “was given no warning, much less a hearing, before he was arrested, chained and incarcerated,” according to the lawsuit. The detainee is being held on a $5,000 bond issued by ICE, which exceeds the statutory minimum of $1,500, his lawyers say.

This has been shared from Sun Sentinel.