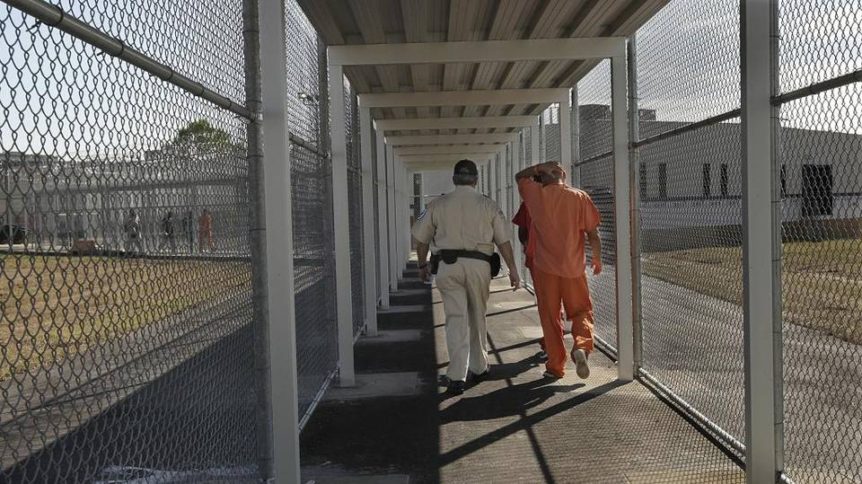 National civil rights and immigration lawyers are calling on state and federal officials to mandate complete oversight of all adult immigration detention facilities in Florida following a scathing report by the Southern Poverty Law Center and Americans for Immigrant Justice released Monday.

The Miami Herald took scheduled tours of both the facilities in Miami-Dade and Broward in recent months. However reporters were not allowed to conduct interviews or take any footage.

The investigative report, titled “Prison by Any Other Name,” is based on tours of the properties and at least 100 interviews of Immigration and Customs Enforcement detainees who say the federal government is failing to provide adequate medical and mental health care, discriminates against people with disabilities, and unnecessarily uses solitary confinement as a form of punishment, among other accusations.

“Reasonable accommodations for mobility-impaired people are ignored — for example, individuals are placed in top bunks despite their disabilities,” said Jessica Shulruff Schneider, director of Americans for Immigrant Justice’s detention program. “Medical care is also inadequate — chronic medical conditions are not properly treated, with Ibuprofen as a one-size-fits-all treatment for everything from an infected molar to a broken bone.”

The report features written testimony from a number of detainees who said ICE fails to ensure that incarcerated individuals are provided adequate healthcare, or that people with disabilities receive proper accommodations to participate in basic activities like bathing, sleeping and getting exercise. It says the authorities are also failing to provide effective interpretation for non-English speakers in the Florida centers, forcing individuals to gesture to explain symptoms to medical and mental health workers.

“Immigrant detention is a system in which noncitizens are incarcerated in prison-like conditions while they wait for an immigration court to decide their cases or for deportation,” the SPLC said in a statement. Conditions are similar to those in prisons even though most detained immigrants have not been charged with a crime… [We] recommend that ICE revisit both the number of individuals it chooses to detain and the conditions in which it detains them.”

“All ICE facilities are subject to regular inspections, both announced and unannounced, and the facilities referenced have repeatedly been found to operate in compliance with federal law and ICE standards,” ICE spokesman Nestor Yglesias told the Miami Herald Tuesday. “The group responsible for this allegation has an extensive history of making unsubstantiated claims and should be treated with appropriate skepticism given its extensive use of anonymous, undated claims that are impossible to verify or rebut.”

Attorneys who conducted the interviews of the detainees said the last names of people quoted in the report are being withheld because their immigration cases are still pending. Other names were changed because of fear of retribution.

As of April, Florida had the sixth-largest population of people detained by ICE in the United States, according to the Transactional Records Access Clearinghouse at Syracuse University.

On a daily basis, ICE currently detains more than 2,000 people in Florida, mostly in South Florida, which is home to four immigration detention centers. About 5 percent of those detainees were interviewed for the report.

One of them is identified as Guillermo M, a Venezuelan man who fled his country to escape torture, sexual assault and anti-gay harassment. According to the report, the Broward Transitional Center detainee was bullied by guards and harassed for sex by other detained men. Guillermo was ultimately refused a request for a new roommate to escape the harassment, and attempted suicide.

After the attempt, Guillermo was in the hospital for 17 days and doctors recommended he receive weekly therapy following his hospital stay. According to the report, he received it on a monthly basis instead, via teleconferencing with providers who did not speak Spanish.

“I don’t know what’s worse, this or death,” he told the attorneys who authored the report.

Another detainee, whom the report refers to as Pierre, had similar complaints. Pierre, who is HIV positive and has also been diagnosed with hepatitis A, told lawyers he had not received any treatment or seen a doctor after four months at Krome. He also had a cyst on his eyelid the size of marble that has not been examined.

Pierre “has yet to see a doctor since being taken into ICE custody. On the day he was transported to Krome, he had to skip a day of medication. He worries that in almost four months of not seeing a doctor, his condition may have changed,” the report says. “A medical professional told him he needs to get it tested, but his multiple requests for an appointment have been pending for some time.”

Other complaints at Krome include “abuse of power,” according to detainee Macario B: “There was a guy that had not finished eating and they put him into solitary for it.”

Overcrowding is another concern, according to Krome detainee Jesus R: “They started to put people between beds on the floor. People are irritated. It’s a tiny space and it’s overcrowded. When you open your eyes, you just see people everywhere.”

Because of Monroe and Glades’ remote locations and policies, inmates are almost always isolated from friends, family and their immigration attorneys. If visitors do arrive, both facilities allow only for time-restricted video chats.

At Monroe, detainees who set up video “visits” with loved ones remotely must pay $9.95 for a 25-minute chat or else rely on phone calls. In each detention pod there are five phones for more than 80 people, creating long lines for the phone and no privacy for phone calls, the report says, noting that the fees put videoconferencing out of reach for many families.

Because both facilities double as prisons for non-immigrant criminal offenders, “those detained by ICE are essentially treated the same way despite being held in ‘civil detention,’” the report says

According to the report, Leslie, a 31-year-old man from Haiti, checked on a friend, known as “Papi,” in another cell only to discover he had died. Papi, who used a wheelchair and had a history of strokes, had earlier asked the staff to take him to the sick bay, Leslie said. His request was denied.

“The guards also didn’t listen to Leslie, a trustee, when he reported banging sounds coming from Papi’s cell before his death,” attorneys said in the report. “Leslie has struggled to navigate life in the detention center. He worries about his health and the effects of detention. Even before Papi’s death, Leslie, like many other detainees, tried to find a way to cope with being locked inside a dorm 24 hours a day.”

At Glades, a detained woman reported being diagnosed with uterine cancer but said ICE failed to schedule a follow-up appointment for almost a month. The doctor even told her that it was unlikely ICE would pay for her treatment.

“I’ll probably be deported before getting any type of [cancer] treatment,” she said.

“Substandard conditions were found at all four of South Florida’s immigration detention centers. All of the facilities are in violation of detention standards, regardless of which version of these standards is used, as well as constitutional standards of care,” the report said. “The violations found in South Florida do not appear to be an anomaly. Similar violations have been found in ICE detention nationwide.”