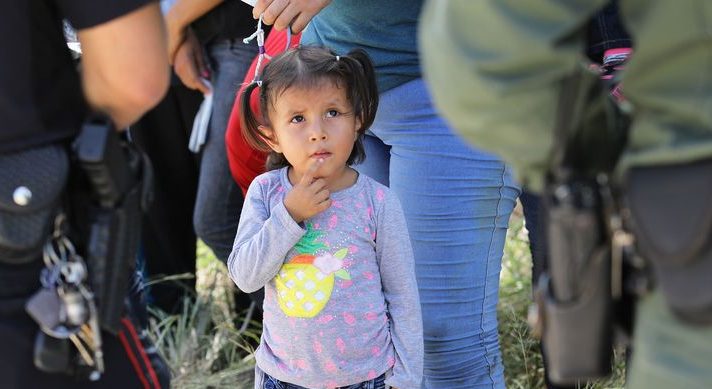 BY ROSE MINUTAGLIO AND MADISON FELLER

Alexandria Ocasio-Cortez likened detention centers at the U.S. border to “concentration camps” during an Instagram live last week and followed up her statement with a series of tweets calling to #CloseTheCamps and #AbolishICE. Her comments ignited a debate over whether the term “concentration camp” was the appropriate nomenclature for the facilities where migrant children are being taken from their families and made to sleep on concrete floors in freezing and overcrowded cells with no access to soap or toothbrushes or showers.

According to NBC, at least seven migrant children have died since last year after being apprehended by federal authorities—four of them while being held by U.S. Customs and Border Protection.

In May, a 16-year-old Guatemalan boy named Carlos Gregorio Hernandez Vasquez died in immigration custody in south Texas after being diagnosed with the flu a day before. This month, immigrant advocates found that CBP was holding a 17-year-old mother from Guatemala in a Texas facility with her prematurely born baby, who advocates believe should have been receiving care in a neonatal unit at a hospital, according to The New York Times.

Just last week, reports surfaced detailing decrepit and dangerous conditions at a Border Patrol facility in Clint, Texas, where a group of visiting lawyers were horrified to discover a lack of basic necessities available to detainees, including toothbrushes, soap, towels, and even showers.

“There is a stench,” one of the visiting lawyers, Elora Mukherjee, director of the Immigrants’ Rights Clinic at Columbia Law School, told The New York Times. “The overwhelming majority of children have not bathed since they crossed the border.”

“So many children are sick, they have the flu, and they’re not being properly treated,” she added.

Last year, the Department of Health and Human Services said there were more than 2,000 children separated from their parents, thanks to the Trump administration’s “zero tolerance policy” when it came to illegally crossing the border. They are being held in harsh conditions that no child should ever suffer. In the face of confusing and on-going atrocity at the border, it can be easy to feel helpless.

Here are five concrete ways you can really help, now.

1. DONATE DIRECTLY TO THE FAMILIES

Most charities say the best way to help is through financial donations, not product donations. Well-vetted groups that provide humanitarian aid to migrants include Pueblo Sin Fronteras, an organization with two shelters along the border of the Sonoran Desert, and Border Angels, a volunteer coalition that provides water, free legal help, and emergency services.

You can also donate to Immigrant Families Together, a group started by women in New York, working to raise bond money for parents who were separated from their children at the border. They also work to arrange long-term housing and pro bono attorneys for immigrants while they await trial. (In one instance, Kristen Bell helped the organization reach the $30,000 bond goal for a mother named Delmi.) Go to the organization’s websiteto find a number of crowdfunding pages for women who are still in need of funds.

Organizations United We Dream, the American Civil Liberties Union, and Mijente are also helping coordinate advocacy and services for families.

2. SUPPORT THE LAWYERS FIGHTING FOR THEM

By donating to RAICES, you support every aspect of legal aid for immigrant families. The group aims to provide legal services to every released unaccompanied child in the state, which could be around 13,000 kids. They also aim to pay off immigration bonds to free asylum seekers from ICE custody, letting them reunite with their children. You can also donate directly through their website.

If you want to donate your time, help interview migrants at the border. If you live in a border area, have legal or paralegal experience, and speak Spanish, Mam, Q’eqchi’ or K’iche’, sign up to volunteer with the Texas Civil Rights Project. The Legal Aid Justice Center also looks for volunteers who live in the Virginia area and can help with translation or administrative tasks.

The American Immigration Lawyers Association and the American Immigration Council have also started an initiative called the Immigration Justice Campaign in order to increase legal representation for detained immigrants. They currently need volunteers in Georgia, Colorado, Texas, New Jersey, Ohio, and Washington, as well as remotely. They’re looking for pro bono attorneys and volunteers who can help with interpretation and mental health evaluations.

3. DONATE TO SEVERAL PLACES AT ONCE

ActBlue splits your donations between 12 different groups. The nonprofit fundraising platform for liberal causes has set up a page that benefits Al Otro Lado, The Florence Project, Neta, Innovation Law Lab, Fuerza Del Valle, The Young Center for Immigrant Children’s Rights, We Belong Together, United We Dream, The Women’s Refugee Commission, The ACLU, Kids in Need of Defense (KIND), the Asylum Seeker Advocacy Project, Human Rights First, and La Union de Pueblo Entero. You can donate any amount, and split it however you want between the groups.

4. CALL OR EMAIL YOUR ELECTED OFFICIALS AND SAY THIS EXACTLY

It’s as important as ever to let elected officials know how you feel about the administration’s treatment of immigrant families. Here is an official government site with links to finding out who you should call, based on where you live. RAICES has also drafted a sample complaint to call your representatives to complain about the migrant facility conditions and the planned ICE raids, which Trump announced, and then delayed. You can check out their website, here. This is what they recommend you say:

I am deeply concerned and saddened by the announcement of ICE raids coming to my community this weekend. The raids are inappropriately named “Family Op” and they couldn’t be more detrimental to all American families.

My friends and neighbors are scared and many of them feel they are under attack. This amounts to domestic terrorism. ICE plans to target 2,000 families but even one raid in my neighborhood will spread fear across my entire community.

We DO NOT want this to happen in our community. Will you join with me, my friends and neighbors to defund ICE, put pressure on local ICE offices, and stop the immigration raids?

We need to stop this. Mass indiscriminate raids are NOT the answer.

5. CALL THE NATIONAL FAMILIES TOGETHER HEADLINE

RAICES has also set up a hotline (866-378-2667) run by volunteers who are available to answers call from 9 AM to 5 PM CST. These volunteers are trained to gather information about separated parents and will work to then locate detained parents and connect them to pro bono legal services. Callers can also leave voicemails at any time of the day.

Similarly, Vera Institute of Justice’s Immigrant Connection Project is working to connect parents who have been separated from their children with the attorneys in contact with their kids. If you’re a legal service provider who knows of a parent looking for a child, contact ICON at 800-845-8372 or familiasunidas@vera.org.

Read it via ELLE here.