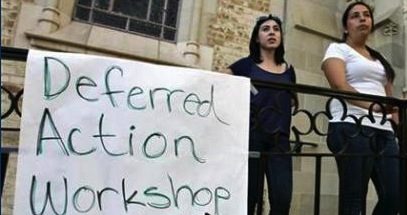 Carlos Roa celebrated this summer when the Obama administration announced a new program to defer deportation for young undocumented immigrants.

But two months into the program, the 25-year-old activist has yet to apply.

Roa, whose parents brought him here from Venezuela when he was two, is facing many of the same worries and complications as thousands of the other young immigrants, who call themselves “Dreamers” after the failed Dream Act legislation of 2010 that sought to put them on a path to citizenship.

Stepping out of the shadows may identify other family members as undocumented and put them at risk of deportation.

And after living for years under the radar, sometimes working off the books, immigrants can find it difficult to assemble all the documentation needed to prove their “continued presence” in the U.S. for at least five years, as the law requires.

Further, some eligible young people have decided to wait until after the November 6 election to file papers, worried that if Republican candidate Mitt Romney becomes president he might cancel or modify the executive order, leaving them vulnerable to prosecution.

OFF TO A SLOW START

Since August 15, when the federal government began accepting applications, through October 10, almost 180,000 people submitted requests. So far 4,591 have been approved, according to the U.S. Citizenship and Immigration Services, or USCIS.

The number of applicants is a fraction of the 1.7 million potentially eligible for the program known as Deferred Action for Childhood Arrivals, or DACA, according to the Pew Hispanic Center, a nonpartisan research organization.

“That didn’t surprise me at all,” said Laura Lichter, president of the American Immigration Lawyers Association (AILA), who practices law in Denver.

“I look at my own cases, and it took me two weeks to pull in documents for the simple ones.”

While some applicants have expired visas to prove the date they entered the country, others were small children when their parents led them across the border, with no documentation of the event.

School records are crucial to meeting requirements for DACA, including the requisite continuous presence in this country.

After high school graduation, however, many students stop leaving a paper trail. While thousands have made it to private colleges on scholarships or money earned through side jobs – allowing them to use transcripts as proof of their presence – others who couldn’t afford the tuition and lacked documentation for the less expensive in-state public colleges had to survive for years working off the books for cash and now lack a solid record of their whereabouts.

What’s more, Lichter said, clients and their families live in a climate of fear and uncertainty. Though the immigration service issued reassurances that applicants’ information won’t be turned over to enforcement agents, concerns are stoked by record-level deportations and an upcoming presidential election that could affect the future of the deferral program.

Romney said in early October that if elected he would honor approved deferrals but scrap the program in favor of broader reforms. But some fear that his immigration reform might exclude Dreamers altogether, noting that he previously opposed the Dream Act.

Unlike that legislation, deferred action does not confer legal status but instead offers relief from deportation and a work permit for two years, after which applicants can seek a renewal. They also can obtain Social Security numbers.

To qualify, applicants must pay a $465 fee and show they were under age 31 on June 15; arrived in the country before age 16; have lived here continuously for the last five years; and are in school, have graduated from high school, obtained a GED, or served in the military.

Suspected national security threats, felons or those convicted of “serious” misdemeanors involving drugs or sexual abuse will be turned down.

Despite initial reservations and difficulties paying the fee, more undocumented immigrants are coming forward to apply, said Doug Stump, an Oklahoma immigration lawyer who has 120 applications ready to file.

“The kids just wanted further assurance that they weren’t walking into the lion’s den,” Stump said.

This generation’s comfort with the Internet significantly aids the process. AILA and other groups set up free online screening programs and are developing an iPhone application to help Dreamers figure out if they qualify.

“For most of the girls, if they are working at home or with their parents, most of them don’t have anything,” Calo said, referring to documents after high school.

Indeed, Facebook and the Internet helped drive what has become a virtual social movement of young undocumented immigrants. For the past five or six years they have used social media tools, including Facebook, MySpace, Twitter, YouTube and blogs, to tell their stories and encourage each other to “come out” while also successfully pressuring officials to halt numerous deportations.

“They are a force to be reckoned with now,” said Cheryl Little, Miami-based executive director of Americans for Immigrant Justice, which offers pro bono legal help to undocumented immigrants.

Roa is one of her clients and one of four students who walked 1,500 miles from Miami to Washington in 2010 to lobby for deferred action, a journey they called the Trail of Dreams.

But Little has struggled to prove Roa’s presence between 2007 and 2008.

Though Roa’s grandfather was a U.S. citizen, he died before Roa’s father could obtain a green card.

After high school graduation in 2005, Roa worked jobs in a warehouse and in construction, saving up to study architecture at Miami Dade College in 2009. Those intervening years created a gap in the documents.

“The one blessing is that I came out as an undocumented immigrant in 2007,” he said. That year, a New York Times reporter featured Roa in an article about the Dream Act, though it did not use his last name.

Little is submitting the article with his application. If approved, Roa is looking forward to getting a driver’s license and not having to rely on buses to get around.

That will help him with his ultimate goal of being accepted at a top-notch university to finish his architectural studies after he graduates in December with an associate’s degree.

The courage of Dreamers coming forward in the media inspired Oscar Gutierrez, 18. For years the high school senior from Clearwater, Florida, kept his undocumented status a secret – until more than a week ago, when he got word that his deferred action application was approved.

“I can get a job now, I can get a driver’s license,” Gutierrez said, adding that his father wrapped him in a big hug the day they got the news.

Since elementary school, when his parents told him not to tell anyone he was brought from Mexico as an infant, he had lied about where he was born, afraid he and his parents would be deported and separated from his younger sisters, both U.S.-born citizens.

He’s glad to step out of the shadows.