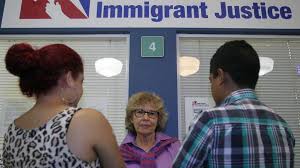 Tens of thousands of children who fled Central America expected to find refuge in the United States, but instead wound up in ice-cold detention cells with little food and no showers and were then put in deportation proceedings, according to a new report.

“The journey was awful,” the document quotes Maria, one of the children, as saying after she was detained upon crossing into the United States. “I risked my life to now be deported.”

The 44-page report prepared by the Miami-based immigrant rights group Americans for Immigrant Justice is a detailed account of the harrowing stories of many children who undertook the perilous journey from Honduras, El Salvador and Guatemala — largely to escape intensified gang violence.

Children Fleeing Central America: Stories From The Front Lines in Florida opens a window into a largely overlooked dimension of the problem — a dangerous voyage that did not end in welcoming refuge, but in hostile detention, threats of expulsion and an uncertain future.

“So many of the children we see literally fled for their lives,” said Americans for Immigrant Justice executive director Cheryl Little, who wrote the report with help from staffers. “Yet our government has fast-tracked their immigration court cases, a process that even the National Association of Immigration Judges has criticized. The children we see inspire us daily. They are resilient, courageous and, most importantly, survivors. If given the chance I have no doubt they will do us proud.”

Since 2012, the number of unaccompanied Central American minors arriving in the United States has surged sharply to unprecedented levels. A recent report on the surge by the U.S. Conference of Catholic Bishops (USCCB) tells the story.

U.S. Customs and Border Protection (CBP), the agency in charge of border control, says that between October 2013 and Aug. 31 this year, 66,127 unaccompanied minors crossed the border.

The Americans for Immigrant Justice report says it expects even more children to cross the border.

“We are preparing for a scenario in which an estimated 90,000 children could cross our borders,” the report says.

Perhaps the most memorable part of the report are the multiple stories as told by the children themselves.

The children are mostly quoted only by their first names to protect their identity.

Here are summaries of three stories by minors from El Salvador, Honduras and Guatemala included in the report:

Marissa fled El Salvador after years of abuse and neglect at home and after repeated threats by gang members.

“Gang members followed me everywhere I went. I even found notes under my door saying that I would be killed. I moved several times to try to keep safe, but the gang members always managed to find us. I still live in constant fear that they will find me here and kill me.”

“I spent 17 hours in a van when I left. A 7-month-old baby and her mother and a 15-year-old girl were in the van, too. The windows were all closed. There was no air conditioning and the coyote [migrant smuggler] was smoking all the time. I felt like I couldn’t breathe.

“When we got to Mexico, we were taken to a bodega [warehouse] to wait to get to the border and I was really scared the whole 11 days we were there. There were a whole bunch of men who made me clean and work for them, and they kept yelling at me and pushing me and saying hurtful things to me, like you’re just a f—ing Honduran.”

Rosa, a Guatemalan teen, described difficult conditions upon being detained after crossing the border.

“Shortly after crossing the border, I was placed in a hielera [a cell as cold as an icebox]. One of the officials told me that a woman was going to pat me down, but as I was waiting my turn I noticed that it was actually a man.

“The girl that went right before I did didn’t actually get patted, she was only asked if she was carrying anything; she said ‘no’ and was moved along. However, when it was my turn, the same male official told me to spread my legs and arms. He began to touch me up and down my legs and in between my thighs. He also touched over and underneath my breast. I felt very uncomfortable. Another official noticed and told the officer touching me to stop.”

The report says that in June 2014, Americans for Immigrant Justice and four other civil and human rights groups filed an administrative complaint against CBP on behalf of more than 100 children.

“The complaint was filed in response to widespread abuses of unaccompanied immigrant children at the hands of U.S. border officials, including verbal, sexual and physical abuse, prolonged detention in squalid conditions, and a severe lack of basic necessities such as food and water,” the report said.

Besides improving conditions at border detention cells, the report also noted that without an attorney many minors are likely to be deported even if a majority of them may qualify for some sort of immigration relief, either asylum or special visas.

To improve their chances of avoiding deportation, the group has called on attorneys to volunteer pro-bono services so that a majority of children received legal representation in immigration and other courts.

Early on in the crisis, the Justice Department announced a limited legal representation program for some of the children.

The Health and Human Services Department (HHS) announced a similar limited program last week that would benefit 1,222 children this year.