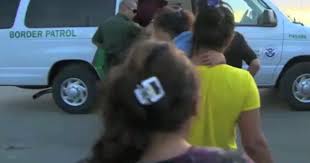 Rumors of immigration raids are spreading like wildfire in Hispanic communities. Some local immigrants are even afraid to step out of their homes. The Guatemalan-Maya Center and attorneys with Americans for Immigrant Justice are educating both documented and undocumented immigrants on what to do in the event of a raid.

Every day a Guatemalan man living in Lake Worth who wants to go by the name ‘Fransisco’ says he fears he will be separated from his family.

“You hear the rumors that ICE is here and it worries me,” said Fransisco in Spanish.

Fransisco says even walking his dog in his neighborhood feels like a risk. He’s looking out for his three children, all U.S. born.

“It’s not easy to talk to them about this, but you have to tell them what’s going on,” added Fransisco.

Over the New Year’s weekend, 121 adults and children were detained in immigration raids in Georgia, Texas, and North Carolina. The fear of being next is why Fransisco brought his 11-year-old daughter to a Lake Worth community meeting.

“It’s really concerning now because they are going after women and children now, which in the past they said they were only going after criminals but they are actually targeting families now,” said Jennifer Anzardo Valdes, attorney for Americans for Immigrant Justice.

Attorneys stressed the importance of remaining silent, not opening the door for any officer without a search warrant or detainment order.

“They need to realize that they have rights as well even if they are undocumented,”  Anzardo Valdes.

If they are detained, attorneys say don’t sign anything and call a lawyer. Fransisco knows the raids are real, he’s prepared for the worst and just hopes it doesn’t happen to his family. “You hear about the families being separated and that hurts,” added Fransisco.

The Palm Beach County Sheriff’s Office says they currently have a liaison working with the Hispanic community to educated them as well. The Guatemalan-Maya Center is hosting another immigration meeting on January 19th in West Palm Beach at John Fisher Church.