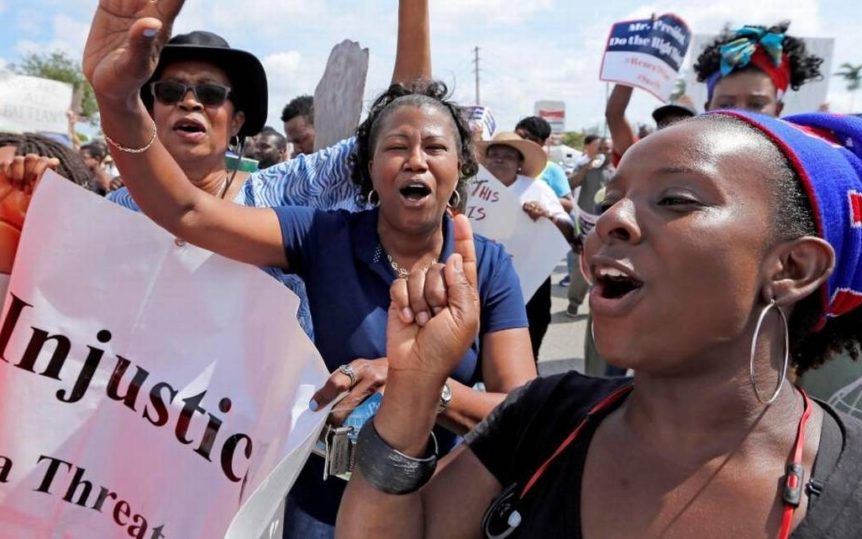 For 29 years, Evette Prosper has called the United States home. It’s where she attended school, got married and gave birth to two children, now 8 and 7.

An only child, Prosper doesn’t know where her father is. And both her Haitian mother, and her grandmother — who migrated with her from Haiti when she was just a year old — are dead.

But her husband of 11 years is a U.S. citizen. That should place her squarely in the category of Temporary Protected Status, or TPS, holders that the U.S. Department of Homeland Security referred to when, announcing a six-month TPS extension last week for Haitians, it said many of the 58,700 recipients could adjust their status to remain and work legally in the United States on a permanent basis.

But Prosper, who was born in the Bahamas, which doesn’t automatically grant citizenship, has neither a Bahamian nor a Haitian passport. And with no proof that she ever entered the U.S., adjusting her immigration status is almost impossible unless she can leave and reenter the country. She is, as one immigration lawyer put it, stateless. Her case exemplifies the challenges some TPS recipients face as they seek to move from temporary to permanent U.S. residency.

“It’s very overwhelming on your future,” Prosper, 30, said. “You don’t know if you should seek future plans. I’ve never been to jail, never been in a cop’s car before. It’s kind of scary not knowing what the future holds.”

On Thursday, Prosper was among dozens of Haitians who poured into the Little Haiti Cultural Complex in Miami hoping to find answers from a panel of immigration lawyers. The town hall-style discussion, one of several that will be offered in coming months, was organized by Fanm Ayisyen Nan Miyami/Haitian Women of Miami and other immigration rights groups.

Prosper, like many others, is fearful of possible deportation and what that could do to her family, especially after DHS advised Haitian TPS recipients to get their affairs in order.

“What will they do with people who have kids?” she asked the lawyers at the meeting.

“You need to think hard about potentially what you want to happen to your children,” Simpson advised. “Make sure your children have passports, documents.”

Sensing the panic among some in the room, Catholic Charities Legal Services attorney Georges Francis said: “Don’t freak out. Be calm.”

“TPS has not ended yet,” Francis said. “It’s been extended for six months.”

Last week, after months of advocacy, letters and protests, DHS Secretary John Kelly announced that the immigration benefit, provided by the Obama administration to Haiti in the days after its devastating Jan. 12, 2010, earthquake, would be extended an additional six months. Instead of expiring on July 22, TPS for Haiti will now expire on Jan. 22.

Kelly, in a Miami Herald interview after traveling to Haiti on Wednesday to discuss TPS with the Haitian government, said he “doesn’t know” if he will extend TPS, end it or redesignate TPS for Haiti when he has to make a decision again this fall. As he did last week, he urged Haitians to get their affairs in order and prepare to return to Haiti.

“Once they drop me at the airport [in Haiti], that’s where I’m staying,” the 70-year-old told the panel in Creole.

Charles, who has been living in the United States since 1979, said that while he has had work authorizations, he never managed to get a green card. He later described a complex web of immigration mishaps, including paperwork that he never received, appointments he couldn’t meet because of transportation issues while working in North Carolina and being duped by immigration programs and lawyers.

“I never thought I would find myself in this situation,” Charles said, pleading for help. “How can I be rescued from this?”

Panelist Steve Forester, speaking in Creole, told the crowd that the fight continues, and Marleine Bastien, who heads Haitian Women of Miami, added that there’s still hope for another extension. While activists are trying to help TPS recipients get answers to their legal questions and adjust their immigration status, she said, the fight to hold onto TPS beyond January is only now intensifying.

“The motto today was ‘to give hope to the families.’ But at the same time, to let them know that this fight is not going to be easy. It’s probably going to be the hardest fight ever,” Bastien said.

Bastien said she was “very disappointed” that Kelly took a half-day trip to Haiti but didn’t get to the Grand’Anse department, a region that was slammed by Hurricane Matthew in October and continues to suffer from a hunger and housing crisis eight months after the deadly storm. Its plight is among several examples activists have cited when arguing that TPS should be extended for at least 18 months.

“What it shows to me is … he went there with his mind already made up and he wasn’t really interested in having an eyewitness account of what’s really going on there,” Bastien said of Kelly, the former head of U.S. Southern Command who has defended his knowledge of Haiti’s challenges and notes that he’s visited the country more than 10 times in recent years. “It’s really cruel for him to come back, not taking time to see the conditions, and tell people he wants them to be prepared for deportation.

“He doesn’t realize the level of stress and trauma he’s causing in the lives of these people,” she added.

Bastien said she plans to take the TPS extension fight to Capitol Hill in Washington, seeking out additional support from congressional lawmakers. She and others will also visit Haiti “to work with organizations on the ground to get a real count of what’s going on in Haiti, so we can bring the real honest truth to the stories.”

They may also get a chance to take their plea directly to Haitian President Jovenel Moïse, who is scheduled to be in Miami on June 15 for a Haitian American Chamber of Commerce event. Many feel that Moïse, despite meeting with Kelly, doesn’t fully grasp the issue around TPS and the Haitian diaspora’s fight for an extension beyond January.

The same day Moïse is scheduled to be in Miami, Kelly and U.S. Secretary of State Rex Tillerson are also expected to arrive in the city for the Conference on Prosperity and Security in Central America, in partnership with Mexico. Kelly had suggested to Moïse to try and meet with Tillerson and other U.S. officials during his visit.

“I see the trauma every day. But it seems like both [Kelly] and President Jovenel, and the powers that be in Haiti, don’t realize the trauma they are causing,” Bastien said. “Since we’ve been here in the ’70s, early ’80s, every little gain, policy-wise, has been a long-term fight. Nothing has never been offered to us on a silver platter.”

To read this article on the Miami Herald, click here.