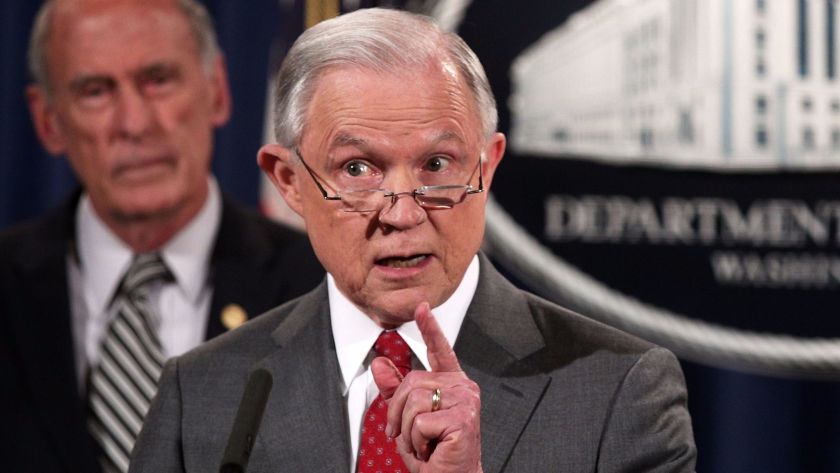 Speaking in Miami, where county authorities hold prisoners for federal immigration agents, Sessions said sanctuary policies are an example of “lawlessness” and again vowed to cut off federal funding to communities that use them.

Although the link between illegal immigration and rising crime is weak — studies show immigrants tend to commit crimes at lower rates than other people — Sessions suggested Miami’s policies contributed to a dramatic drop in murders.

“The same Independence Day weekend when Chicago suffered more than 100 shootings and 15 homicides, Miami-Dade also had a historic number of shooting deaths — zero,” he said.

He said the Trump administration would not continue giving money to cities “that actively undermine the safety and efficacy of federal law enforcement and actively frustrate efforts to reduce crime in their cities.”

“So if voters in Chicago are concerned about losing federal grant money: Call your mayor,” he said.

The dangers of immigrant crime are a major concern for President Trump’s base of voters, and the issue was a favorite theme for his campaign. Sessions, a hard-line advocate for reducing immigration while serving in the U.S. Senate, has made the cause a top priority for the Justice Department.

Although immigration enforcement is mostly the responsibility of the Department of Homeland Security, Sessions has pushed to hire more immigration judges and has been determined to use financial grants as leverage, threatening to withhold millions of dollars from cities that keep their sanctuary policies.

Last week, Chicago, which received $2.2 million from a Justice grant program last year, filed a lawsuit aimed at blocking the department from linking the grants to immigration cooperation, a tactic the city calls “blackmail.”

Chicago Mayor Rahm Emanuel said Sessions “could not have picked a worse time” for his speech, a week when Trump has been under siege for his shifting statements about violence during a white supremacist rally in Charlottesville, Va.

“Chicago will continue to stand up proudly as a welcoming city, and we will not cave to the Trump administration’s pressure because they are wrong morally, wrong factually and wrong legally,” Emanuel said in a statement.

Other cities and states also have gone to court to block the administration’s attempted crackdown.

California Atty. Gen. Xavier Becerra announced this week that the state would join San Francisco in suing to protect $28 million in federal grants from what he called the administration’s “bullying.”

The main conflict now concerns the treatment of immigrants in the country illegally who are held in local jails. Immigration and Customs Enforcement wants cities to hold them for up to 48 hours after they would be released, to give agents time to pick them up.

Some courts have ruled that these “detainer” requests are a violation of the Constitution.

ICE also asks jails to allow its agents to interview detainees, or give two days notice before one is to be released. Many cities cooperate to varying degrees, but the agency has singled out four that refuse to provide any assistance: Chicago, New York, San Francisco and Philadelphia.

Sessions said those policies make immigration enforcement more difficult and more dangerous because ICE agents then must hunt for people after their release.

“At its root, it is a rejection of our immigration laws and a declaration of open borders,” Sessions said.

Chicago Police Superintendent Eddie Johnson said the administration’s policies on immigration make it tougher for police to do their jobs.

“I have said it before and I will say it again, undocumented immigrants are not driving violence in Chicago,” he said. “And that’s why I want our officers focused on community policing and not trying to be the immigration police.”

The decision drew heated protests in immigrant-rich Miami — Gimenez himself was born in Cuba — but it was later endorsed by the county commission.

Since February, the county has held 477 inmates at the request of ICE — though the agency subsequently arrested only 185 of them on immigration charges.

While some were accused of aggravated assault or auto theft, the county’s list shows some were charged with petty crimes like driving without a license. The county simply honors all detainer requests, said Michael Hernandez, a spokesman for Gimenez.

“We don’t question federal authorities,” he said. “We treat everyone the same, that’s the bottom line. If you are violating local laws, you are treated in the same manner.”

“We’ve heard it from people, ‘I don’t want to call the police, because I don’t want immigration to come,’” said Adonia Simpson, director of the Family Defense Program of Americans for Immigrant Justice, a Miami-based advocacy organization.

Since the new policies were announced, she said, attorneys are seeing a shift in the population of detention centers: more people who have been in the country for years, fewer violent criminals and more people who were picked up on petty offenses.

“It’s often difficult for that person to have a day in court and prove innocence if they’re being held in detention,” she said.