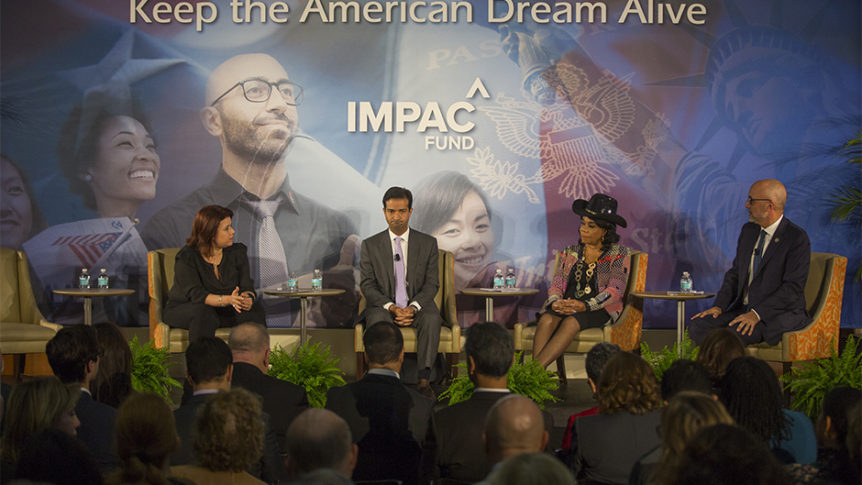 Highlighting the economic vibrancy and cultural richness that immigrants have brought and bring to the U.S. “yesterday and today,” an inspired coalition of Miami business, education, religious, and political leaders held a half-day forum November 28 at the UM Newman Alumni Center aimed at forging sensible immigration policy to “Keep the American Dream Alive.”

Beyond Politics: A Bipartisan Conversation on Immigration Reform was facilitated by the Immigration Partnership and Coalition Fund (IMPAC), an organization founded and spearheaded by Miguel “Mike” B. Fernandez, respected business entrepreneur and UM trustee.

UM President Julio Frenk welcomed the opportunity to “provide a space for respectful, thoughtful, in-depth conversation on complicated issues such as immigration.”

“As a global university committed to excellence and relevancy, we have a stake in this issue,” the president said, noting the 16 percent of UM international students who hail from 180 countries around the globe. He called higher education “one of the most vibrant U.S. export industries, one that prompts a huge trade surplus” and referenced the one million foreign students studying in the U.S. generating the support of 450,000 jobs.

“The consequences are grave if universities lose their place as a beacon for talent from around the world” as a result of restrictive immigration policy, Frenk added.

Fernandez, who arrived at 12 from Cuba and managed to build a successful career in the health care industry, donned his “immigrant cap”—as did a number of speakers—to share personal stories about the gritty challenge of growing up in a strange new country that offered opportunities to those willing to work hard. This willingness to persist is the experience of the vast majority of immigrants, Fernandez said, denouncing the attitudes and rhetoric that seek to define immigrants as miscreants threatening U.S. jobs and culture.

“We have an obligation to stand up and to speak up to counter this policy of mental illness that is going on in some parts of this country, a policy that is scripted to divide us,” he said.

Alberto Carvalho, superintendent of Miami-Dade County Public Schools, told the audience that as one of six siblings born to a custodian and seamstress in Portugal with no education beyond the third grade that he didn’t deserve to be on the stage at the forum.

“There’s nothing in my DNA that should allow me to be here,” said Carvalho who heads the fourth largest school district in the nation. “I was poor, an immigrant and illegal in the eyes of the law when I came here—yet there is beauty and power in this nation that allowed me to become what I am today,” said Carvalho, adding that as superintendent he would resist any order to remove students from schools for deportation.

The forum’s immediate focus aimed at halting the deportation of 800,000 “Dreamers,” brought to the United States as children or youth by parents who arrived without legal immigration status. This group, many of them exceptional students, face deportation in March 2018 based on a September 5 ruling by the Trump administration.

“Immigration and social justice are at the core of the work we strive to undertake at the institute in strong partnership with the School of Law,” Knaul said, adding “we convene and engage around immigrant rights.”

Bush criticized the current “narrative” circulated by some sectors that depicts immigrants as a drain on society or criminals to be feared as misguided, historically inaccurate, and harmful to the values of America. The former presidential candidate said his own life was changed and his mind opened to the richness of cultural diversity when he married his wife Columba, who is from Colombia.

“We do much better as a nation when we see each other in it together,” the former governor said, adding “immigrants are a mirror of us.” Bush referenced that 55-60 percent of those illegally in the U.S. today have not come across the border, but instead have arrived and overstayed their visas.

“It’s not so much the bad hombres who are being apprehended today,” said Little, a champion of immigrant rights for decades, “all immigrants are targets.”

The panelist collectively called on Congress to amend the DACA legislation to allow the 800,000 Dreamers to remain in the country and to revise current immigration policy—which has remained virtually untouched for 30 years.

Fernandez ended the session with a call to action to create a movement that will protect family unity and individual immigrant rights.

“It’s so sad what we’re living,” he said referring to the anti-immigrant rhetoric endorsed by the current administration in an appeal to its base. “They disparage us, call us names, and want to invalidate who we are, but they have awakened a giant lying in the strawberry field. We are part of this nation.”

Read it on University of Miami News & Events.