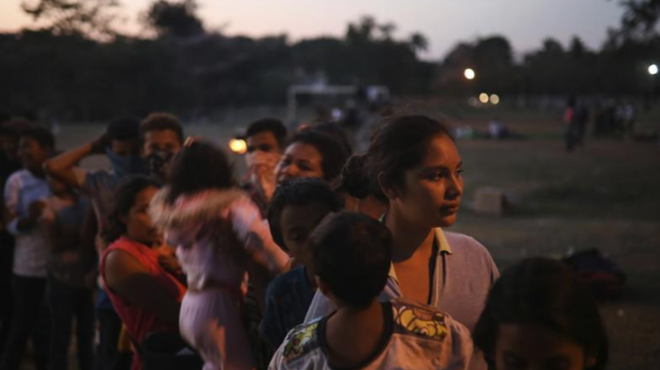 This year barely 20,000 refugees are expected to be allowed into the U.S., compared to more than 100,000 in past years. As a result, the Trump administration is cutting funding to non-profit groups who help resettle them.

The Trump administration’s policy to curtail the flow of refugees into the U.S. is causing refugee resettlement centers around the country to close their doors or slash staff due to a lack of clients and federal funding, groups say.

Church World Service, one of nine agencies responsible for refugee resettlement, has cut ten of its centers nationwide while the U.S. Catholic Church has had to lay off staff at its 75 centers. The International Rescue Committee (IRC), which runs a nationwide network of 28 resettlement offices, has already closed one center in Midland, Texas and is closing two more this summer in Miami, and Garden City, Kansas.

As a result, some states that have for decades received refugees, now worry that a vital infrastructure of social services built up over decades will be lost, and will be hard to rebuild if refugee numbers recover.

The effects on the state’s offices to help refugees who come here for asylum followed President Donald Trump’s decision last year to cap annual admissions at 45,000, the lowest since 1980. Under President Barack Obama’s administration, the annual ceiling was 110,000.

“The refugee program is a mere shadow of its former self,” said Cheryl Little, director of Americans for Immigrant Justice (AIJ) a longstanding immigrant advocacy group in Miami. “America is turning its back on persons desperately in need of our protection, under the guise of national security,” she added.

“It’s very discouraging,” said William Canny, director for Migration and Refugee Services at the U.S. Conference of Catholic Bishops, who worries that services could be further whittled down when the Trump administration announces its refugee cap for the 2019 fiscal year, commencing Oct 1.

“We are expecting another 45,000. We understand it will not be higher, and it could be even lower,” he said.

Refugee advocates accuse the administration of making the admissions system so difficult that they are on track to process only 20,000 cases before the end of the 2018 fiscal year (Sept 30), half the allotted number.

“At a time of widespread need, the United States is in headlong retreat from the principles and practices that for so long has made it a global beacon,” David Miliband, president and chief executive of the IRC, wrote in an opinion article published by the Washington Post this week. “It is no exaggeration to say that if current trends continue, the U.S. government will have no refugee resettlement program at the end of this administration,” he added.

According to its website, the U.S. State Department’s Refugee Admissions Program says “The United States is proud of its history of welcoming immigrants and refugees.” It goes on: “The U.S. refugee resettlement program reflects the United States’ highest values and aspirations to compassion, generosity and leadership.”

The offices, run by mostly religious, non-profit agencies that contract with the U.S. government, provide a range of services to refugees, from assisting them in finding housing and jobs, to helping them navigate healthcare and education services.

The program has been dramatically cut back after the Trump administration sought to ban refugees from Muslim countries last year, as well as reducing the annual quota for admissions. The government said the program was not properly vetted and opened the door to would-be terrorists.

Refugee advocates defend the vetting process. “The refugee vetting system is the most vigorous and comprehensive vetting system for any group in the country,” said Canny, 63, who has worked with refugees for four decades.

“We have had an excellent public-private partnership for decades that has been suddenly broken down,” he added, noting that there is no evidence of assisted refugees committing acts of terrorism in the United States.

Canny noted that the State Department’s Bureau of Population, Refugees, and Migration has seen a number of high level staff departures since Trump took office, who have not been replaced. “We have a leadership vacuum that is certainly contributing to the uncertainty,” he said.

In an emailed statement, a State Department spokesperson said the cuts are designed to “improve efficiencies” in accordance with the number of refugees. It was “too early to determine” what the final refugee admission numbers will be for this fiscal year, the statement went on, noting that additional vetting procedures were needed to protect “the safety and security of the American people … (and) … to identify threats to public safety and national security.”

As an example of the shrinking refugee totals for individual countries in 2017, 6,996 refugees came from Iraq. The figure for the first half of the fiscal year ending Sept 30 is 107. Comparable figures for Iran are 2,577 and 31. Forty-four vulnerable Syrians have found safety here, compared with 6,557 last year (45 percent of whom were children under 14).

“That’s really a shameful abdication of our responsibilities to care for refugees globally,” said Erol Kekic, director of the International Refugee Program at Church World Service.

“It’s very likely that (refugee resettlement) infrastructure will be lost in some communities. It’s not something you can just turn the tap on and off,” he added saying that CWS has reduced its operations to 22 centers in 19 states.

IRC opened its Miami office in 1960, mainly to assist refugees fleeing revolution in Cuba, as well as victims of human trafficking and hurricane disasters in recent years.

“It has been a flagship office for the IRC – and provided services to thousands of people for decades,” the IRC said in a statement.

Miami has seen a huge drop in migrant numbers after the Obama administration ended a longstanding policy of special treatment for Cubans fleeing the communist-run island – the so-called ‘wet-foot, dry foot’ program – in one of its last acts before leaving office in January 2017.

Read it on Univision here.