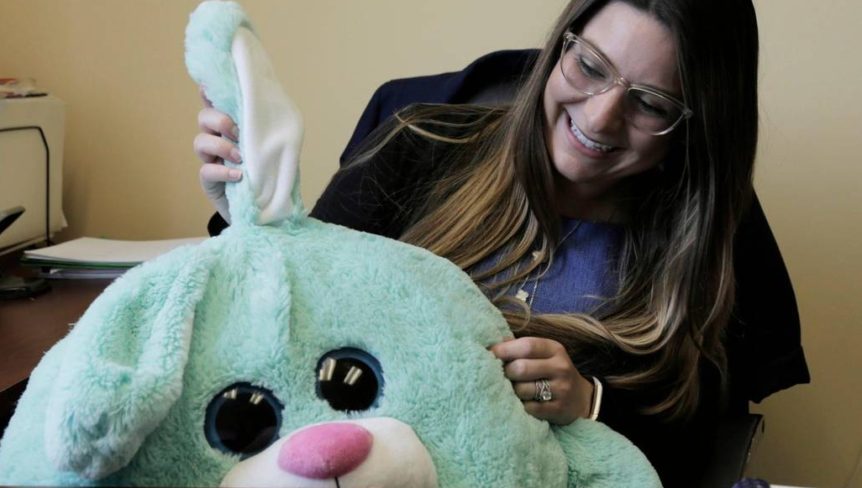 “Sometimes I give them the toy to make them feel more comfortable, to give them something to hold on to, touch and feel,” said Bouliakis, who represents immigrant children applying for U.S. asylum.

Bouliakis has noticed in recent months that an increasing number of her child clients are smaller than the stuffed rabbit. Some play with it on the floor. Others fall over when they try to carry it.

Those anecdotes reflect the new challenges faced by Bouliakis and her colleagues at Americans for Immigrant Justice (AIJ) after thousands of families were separated along the border with Mexico under President Donald Trump’s “zero tolerance” policy.

Aside from helping thousands of other immigrants in Florida, AIJ is the only legal aid organization authorized to represent minors sent to shelters in South Florida by the federal government. Most are teenagers. But others are so young, they need help with their basic necessities while they are moved through a complex immigration system — without their parents — that even adults find difficult to understand.

Among the attorneys’ new tasks is to try to help find the parents of some of their clients, who may be held in detention centers or have already been deported.

Thursday is the deadline set by a California court for the federal government to reunite the more than 2,500 migrant children separated from their parents at the border. 463 parents were already deported without their children, according to court documents filed by the government this week.

On Tuesday, two days before the deadline, the Trump administration said it had reunited nearly 1,200 families and that it was still vetting more than 900 adults to determine if they were eligible for reunification with the children, according to a court filing.

Angeliki Bouliakis Andronis, an immigration attorney working with the Children’s Legal Program at Americans for Immigrant Justice, with a stuffed toy she often uses with her young clients. Photo By: Jose A. Iglesias

But even if authorities manage to reunite the separated families, the AIJ attorneys’ work is just beginning. The avalanche of new cases is joining hundreds of other pending cases of minors who crossed the border by themselves and who have been represented by AIJ for decades.

“We have to put together their asylum cases, represent them in different courts, get the evidence, conduct interviews,” said Jennifer Anzardo Valdés, director of the legal representation program for children. “It takes a lot of time, sometimes years, and it goes beyond the children separated from their parents.”

Even so, the cases of unaccompanied young children are the biggest challenge. AIJ lawyers said they started to notice them months before Attorney General Jeff Sessions announced the zero tolerance policy in April.

Attorney Noemí Samuel del Rosario said she has represented a three-year old Guatemalan girl since January. The girl, identified only as Ana, was separated from her father after they crossed the border in July of 2017.

Ana’s mother died in Guatemala shortly after the girl and her father reached the United States. The father was deported in December, and the government turned Ana over to relatives in Florida.

The girl cannot tell her story, and does not even know her full name. Samuel described her initial interview, in which lawyers try to get basic information from clients, as “difficult.”

“Do you know the name of your parents?” (Nothing)

“How old are you?” (Ana raised three fingers)

Samuel said she wrote on her interview notes, “Unable to communicate. Does not know where her parents are. Only knows her age.”

During their first appearance before an immigration judge, Samuel had to lift Ana onto a seat.

“What lawyer, in any other context, has to worry about something like this?” Samuel told the Herald. “The judge was as puzzled as I was, in my opinion.”

Americans for Immigrant Justice paralegal Cindy Torres meeting with one of the migrant children the legal aid organization represents.

For the team that represents the minors, the job is increasingly exhausting, in and outside the office.

The issues of immigration, now making headlines almost daily, follow them home, on social media and in conversations with friends and relatives.

“It’s like this noise that doesn’t stop…eeeeeee,” AIJ attorney Victoria Illa said as she covered her ears with her hands. “You drive to the office, park and suddenly you start thinking, ‘Who has the next court appearance? Will the judge yell at me if I don’t take my client to court? Does it even make sense to take someone so young to court?’”

AIJ, a non-profit that depends on donations and grants, is finding it an increasingly tough financial responsibility.

After news broke on families separated on the border, thousands of people donated funds for legal services. But most of the money appears to have gone to organizations in states along the southern border. In Texas, the immigrant defense agency RAICES collected more than $20 million in July through Facebook.

AIJ Executive Director Cheryl Little said there’s an erroneous perception that family separations affect only the border region, but the children wind up in shelters all over the country. What’s more, U.S. government figures show Florida saw the second highest number of minors returned to parents or guardians, after California, between October of 2017 and May of this year. About 2,868 wound up in Florida, most of them in southern counties.

“We are in urgent need of additional funding to represent as many children as possible,” said Little. “All our work these days is more challenging than ever, given the extent to which immigrants’ basic rights are being eroded. But our work helping innocent children is especially challenging given their vulnerability.”

Without organizations like AIJ or Catholic Legal Services of Miami (which represents minors who are out of the shelters), most migrant children would have to represent themselves before immigration judges. And hundreds of them already do, according to estimates by the American Civil Liberties Union (ACLU). That’s because, unlike other courts, people appearing before an immigration judge are not assigned a public defender if they can’t afford to pay for an attorney.

A recent legal decision issued by a federal three-judge panel after an ACLU petition, determined that the U.S. Constitution does not afford migrant children seeking asylum the right to a free attorney.

Even with legal representation, it has become more complicated to win asylum petitions, regardless of how compelling the cases are, due to recent changes in policy, according to the attorneys.

Bouliakis recently represented a 13-year-old boy who crossed the border alone and applied for asylum.

“I had put a lot of time into preparing this case,” Bouliakis said. But the judge denied the petition.

Read it via the Miami Herald here.