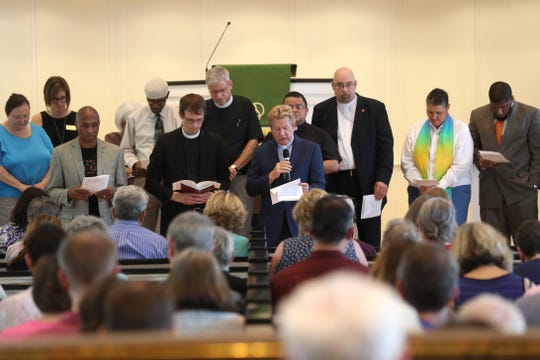 I have heard it diagnosed often in the so-called “information age.” It seems the more we develop the ability to communicate and shrink the globe with awareness of people, places and events, the less we are able to remain focused on important issues that concern us. Information overload or information fatigue syndrome, as some have called it, leads to distraction, dilution, and sometimes a sense of debilitating despair.

I was so moved by the students from Parkland who developed a plan for remaining engaged in an issue that has altered their lives forever. At each supportive event they scheduled, they were strategically announcing the next step. They kept the limelight longer than most because of their strong intention.

And while they continue to advocate for what they believe will make our schools safer, they, as many before them, have gradually lost momentum. As important as school safety is, it seems other issues crowd in and take the focus away from a crucial matter that is far from resolved.

Just days after the news of the separations broke, many in our community met at First Presbyterian Church for a time of interfaith concern seeking swift resolution to the damaging practice of removing children from their parents. We found some solace in joining our hearts and minds in prayer and thoughtful reflection that Wednesday evening in June.

But it has been months now, and the reports have diminished, even as 559 children, ages 5-17, are still separated from the Mammas and Papas they continue to cry for daily. As important as parental presence is in the lives of children, especially in a foreign land, with a language barrier, these children have yet to be reunited though a court order dictated such by July 26.

Four weeks after this deadline, amidst all the new global and national concerns that have since developed in our information-rich world, who is remembering these children?

Stefanie Posner for one. The Education and Music Director at Temple Israel still hears their cries and has organized a fundraising event for Saturday, Aug. 25, at Temple Israel from 5 to 8 p.m. In a recent interview with Tom Flanigan on WFSU, Stephanie expressed that the event has been the effort of a number of interfaith people in our community who have assisted in bringing together the particular talent, inspiration and family fun that will be offered on Saturday evening.

Safe Asylum for Everyone (SAFE), presents Justice Jam, a concert to keep families together. Live performances by members of Bagels and Biscuits, the Swahili Children’s Choir, the Lil’Grizzly Boogie Band, Good Samaritan Methodist singers, and other vocalists and instrumentalists, along with food trucks, family fun and brief inspirational speakers, will encourage all of us to remain vigilant in our awareness of the plight of these children and their parents.

The money raised through donations at the door will go to Americans for Immigrant Justice, an award-winning nonprofit law and advocacy firm that protects and promotes the basic human rights of immigrants. I

In Florida and on a national level, the organization, whose main office is in Miami with a branch office in Washington, D.C., champions the rights of unaccompanied immigrant children; advocates for survivors of trafficking and domestic violence; serves as a watchdog on immigration detention practices and policies; and speaks for immigrant groups who have particular and compelling claims to justice.

Stefanie sees this as the first of a number of events to help us retain concern for the children our nation has wronged through a “zero-tolerance policy” on immigration.

Though there is much to distract, dilute and despair our focus, we want to remember every child who still longs for his or her parents as we join in support of their reuniting soon. I hope to see you there.

Read it via the Tallahassee Democrat here.