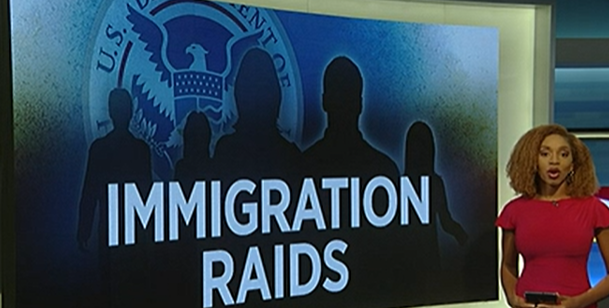 MIAMI – President Donald Trump’s promised nationwide deportation sweep got off to a slower start than many expected on Sunday.

“We haven’t seen the large scale sweeps that a lot of people were anticipating,” said Adonia Simpson, of Americans for Immigrant Justice.

The plan to reportedly arrest and deport up to 2,000 undocumented immigrants across nine cities, including Miami, fell short of some immigration activists’ expectations.

“I think that’s what’s different about this instance, is there was so much notice which creates fear in the community and, regardless what happens in the next few days, the mission is accomplished. The community is afraid,” Simpson said.

While the operation appears to have been downgraded or possibly even delayed, Immigration and Customs Enforcement officials continue to insist it is moving forward.

“We are doing targeted enforcement actions against specific individuals who have had their day in immigration court and been ordered to be removed by an immigration judge,” ICE Acting Director Matt Albence said.

U.S. Sen. Rick Scott, R-Florida, was in town Monday for the opening of a new aerospace facility. He commented on the raids during his visit, but said he has yet to be briefed on the matter.

“You know, they’re doing their job that they’re hired to do, and it’s the law of the country,” Scott said. “I mean, we’re an immigration state. What, some 20-plus percent of our population speaks Spanish? A lot of people have come here, not just from Central and South America, but from all over the world.”

Scott said he believes people should come to the U.S. legally.

“It would be nice if the Democrats would help solve some problems,” he said. “We ought to fix our work visa program, we ought to fix TPS, fix DACA, secure our border, but they won’t do any of that. So I’m going to keep working hard. Hopefully, at some point, it will work. But I don’t believe it’s fair the Democrats are attacking ICE agents and border patrol agents because they are doing the job they were hired to do.”

Despite the slow start, many immigrant rights activists are still sounding the alarm and are worried the raids could pick up later this week as more people return to work.

“People being targeted are not criminals,” Simpson said. “They’re people with final orders of removal and many of them have them because there was confusion about when to go to court, and they may still have a valid claim to asylum for some sort of fear-based relief.”