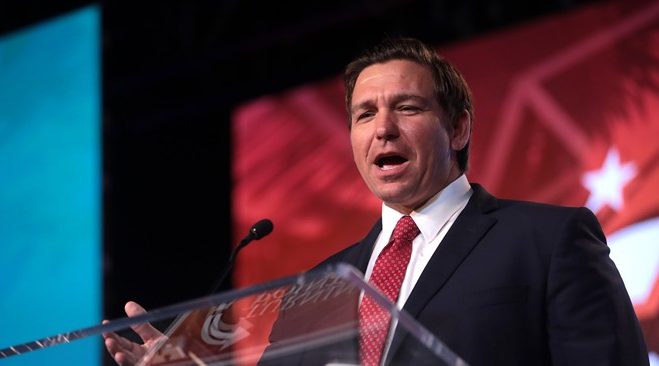 This past spring, activists were unable to stop the Florida Republican Party from passing Senate Bill 168, a demonstrably racist “sanctuary city” ban that was originally pitched by an anti-immigrant extremist group. So a group of nine civil-rights organizations has teamed up with the City of South Miami to try to take down the new law in federal court.

SB 168 sailed through the Florida Legislature despite the fact the U.S. Department of Justice states that Florida does not contain any actual sanctuary cities — AKA municipalities that refuse to cooperate with Immigration and Customs Enforcement. Nevertheless, DeSantis centered his 2018 gubernatorial campaign on forcing Florida cities to cooperate with ICE. Despite numerous warnings that ICE’s own policies — including requests to hold federal immigration detainees in local jails — are all but certainly unconstitutional, Florida passed the law anyway. So now activists have no other option but to sue.

“We are asking the court to halt the enforcement of SB 168 because it violates Floridians’ constitutional right to due process and equal protection under the law,” an attorney for the groups, Alana Greer, said today in a news release. “The bill forces local police to act as rogue ICE agents, in violation of the supremacy clause of the U.S. Constitution, and prevents local governments from enacting policies necessary to public safety.”

In a 72-page filing, the plaintiffs argue that the law is at some points vague and at other points mandates that municipalities engage in conduct that could violate federal law or lead to lawsuits. The City of South Miami, for example, does not operate its own jail and says it does not honor ICE detainer requests as a matter of course. But the Miami-Dade Police Department does occasionally work with ICE to apprehend immigrants within South Miami. Thus, the city government (which voted to hire a lawyer and file the suit last week) says it doesn’t know if this technically violates the provisions in SB 168.

“South Miami believes that it may be deemed out of compliance with SB 168 by Defendant DeSantis, which will lead to (1) the suspension without pay of its leadership, including its Mayor, Vice-Mayor, and Commissioners; and (2) a lawsuit by Defendant DeSantis and Defendant Moody,” the suit states. “South Miami believes that attempts to comply with SB 168 will lead to liability in damage lawsuits by residents and visitors against South Miami or SMPD.”

In other sections of the complaint, lawyers for the activists argue that the bill illegally preempts federal law. States cannot set their own immigration policies — in 2012, the U.S. Supreme Court struck down an Arizona law that made it a misdemeanor crime in that state to simply be an undocumented immigrant without carrying necessary authorization paperwork with you at all times. The law also made it a crime within Arizona to harbor, transport, or hire undocumented people. The Supreme Court ruled in a 5-3 decision that the bill usurped the federal government’s authority and thus violated the Supremacy Clause of the U.S. Constitution. (Justice Elena Kagan, who’d previously argued against the bill in a previous job with the Obama Administration, recused herself from the vote.)

In short, Florida activists argue that SB 168 is again violating the Supremacy Clause. The lawsuit cites multiple instances in which state-level lawmakers said they were trying to somehow fix or alter immigration policies set by the federal government. In April 2019, state senator and Florida GOP Chair Joe Gruters, for example, said he was pushing the bill because “we have a complete failure of Washington to take care of the [immigration] situation” in America. That same month, state Sen. David Simmons said he was voting for SB 160 because “we need a solution to our federal immigration policies.” State Sen. Wengay Newtown had succinctly stated that Florida lawmakers “are creating Federal Immigration Enforcement.”

The suit explicitly states that SB 168 breaks the precedent set by the 2012 Arizona v. United States Supreme Court decision. The complaint lists numerous other instances in which SB 168 allegedly sets immigration policy in violation of constitutional law. SB 168, for example, forces local jails to sign their own contracts with a federal immigration agency, something the activists argue can’t be regulated under state law. In other cases, lawyers argued that SB 168 will adversely impact American foreign policy.

“Florida’s attempt to regulate immigration through SB 168 adversely impacts the United States’ ability to conduct foreign relations with other countries,” the suit states. “SB 168 undermines the ability of the U.S. government to speak with a single voice about immigration, including communicating to foreign nations what their nationals can expect when they come to visit or reside in the United States. State attempts to interfere with these inherently federal issues can have severe impacts on foreign relations.”

The suit additionally argues that the immigration provisions required in the sanctuary ban will clearly push police officers to racially discriminate against black and brown immigrants. In addition to worsening racial disparity in the justice system, the suit argues this, too, could hurt American relations abroad:

In a media statement this morning, Tomas Kennedy, a prominent activist in Miami and the political director of the Florida Immigrant Coalition (FLIC), reiterated that he feels SB 168 makes Florida a more dangerous place. He mentioned that even City of Miami Police Chief Jorge Colina this year said “they would have to fire [him] as a police officer” before he complied with portions of SB 168.

“This bill does nothing for Florida’s safety and actually does more harm than good,” Kennedy said. “Miami’s chief of police expressed his concerns over the erosion of trust in law enforcement and the greater public security concerns for all Americans, regardless of status. Tying immigration to law enforcement increases racial profiling, especially among already vulnerable immigrant communities, and promotes family separation. Neither are good for the country. When immigrants are forced to live in the shadows, it has a negative effect on all Americans.”