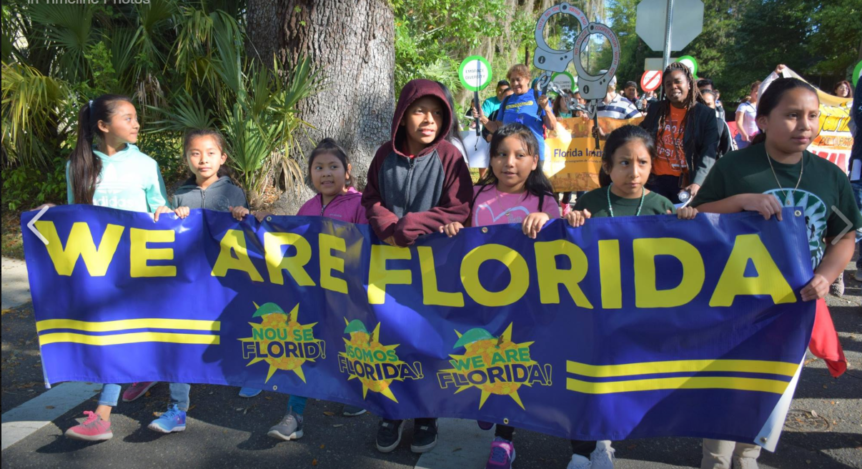 The doctors had a pressing question: What should they tell patients worried about a major Trump administration immigration rule issued the day before?

The rule released earlier this month would make it tougher for immigrants to remain in the United States if they are viewed as likely to use public benefits like Medicaid, food stamps or housing assistance. Recent studies have shown that some immigrants eligible for benefits have dropped them or declined to enroll for fear of jeopardizing their immigration status.

“Whenever there’s a change, there’s a lot of confusion,” said Judy Schaechter, chair of the Department of Pediatrics at the University of Miami Miller School of Medicine, who had invited Simpson to speak broadly about immigration issues. “We want to keep people enrolled if they’re eligible,” she said, stressing the need for children to get preventative medical care.

Trump’s rule — which is slated to take effect in October — would change how the government determines whether someone is expected to become a “public charge.” It would expand which benefits could impair an immigrant’s prospects for becoming a permanent legal resident (a green-card holder), and is expected to have broad-reaching consequences in Florida and elsewhere around the country.

Critics of the new rule say the regulation could have a vast “chilling effect” by spurring even people who won’t be impacted to drop their benefits for fear that it could harm green-card prospects for themselves or their family members.

Health care providers, including the American Academy of Pediatrics, warned the administration when it proposed the rule last fall that it could harm children’s health by causing families to forego federal health benefits.

In Florida, there are about 833,000 noncitizens in families that receive public benefits, according to U.S. census data compiled by the Migration Policy Institute, a non-partisan think tank. There are about 1.8 million noncitizens living in the state.

The Florida Health Justice Project estimated that up to 107,000 U.S.-born children in Florida families where one or both parents are noncitizens, will lose their health insurance. Up to 82,000 could lose access to the Supplemental Nutrition Assistance Program (food stamps) due to the rule’s chilling effect, according to the group. South Florida — with its large immigrant population — stands to be disproportionately impacted.

Nationwide, it remains unclear how many people will be directly affected by the new rule, said Julia Gelatt, a senior policy analyst at the Migration Policy Institute.

There’s been broad uncertainty surrounding the new rule since it was first proposed last year.

“There’s been so much misinformation around the rule with the purpose, I think, of causing panic and making people very concerned,” said Florida immigration attorney Simpson, who is director of the family defense program at Americans for Immigrant Justice.

She said she’s gotten questions about the new rule even from immigrants who wouldn’t be impacted, including domestic violence survivors, some Cuban immigrants and people who have been granted asylum status.

In 2018, about one in seven adults in immigrant families reported that they did not participate in benefits programs because they feared risking their green-card status, according to an Urban Institute report released earlier this year.

Although the rule would only impact adults who don’t yet have a green card, researchers found that the proposal discouraged even some families where all noncitizens had green cards and families where all foreign-born members were naturalized citizens from using public benefits.

“It’s not a surprise that a lot of immigrant families just say, ‘There’s a lot of news about this and I don’t want to screw things up for the future,’” so they drop their benefits, said Gelatt of the Migration Policy Institute.

When it announced the final rule this month, the White House said it was intended to ensure that noncitizens don’t “abuse” the nation’s public benefits.

Ken Cuccinelli, the acting director of U.S. Citizenship and Immigration Services, told NPR this month that the rule was “part of President Trump keeping his promises” on immigration.

Cuccinelli has come under fire for his comments rephrasing the Emma Lazarus poem on a bronze plaque at the Statue of Liberty. He told NPR, “Give me your tired and your poor who can stand on their own two feet and who will not become a public charge.”

Federal immigration law has long allowed the government to deny entry to a noncitizen “likely to become a public charge,” but the Trump administration would — for the first time — consider immigrants’ use of non-cash public benefits like Medicaid and food stamps when making a public charge determination.

Melissa Taveras, a spokeswoman for the Florida Immigration Coalition, called the revised rule “an attack on all low-income people.” She accused the president of sending a message that, “You should be ashamed of yourself if you’ve ever had to tap into a resource like public benefits.”

Federal courts are now considering the legality of the new policy. The Trump administration is facing a barrage of lawsuits challenging the regulation, including several filed by states opposed to the rule. Florida is not among those states.

This has been shared from Florida Phoenix.