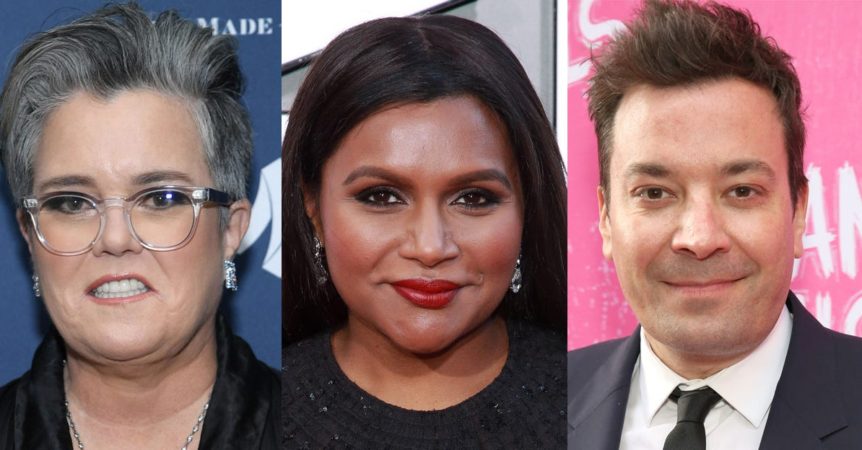 With conditions for immigrants at the border quickly becoming controversial, many celebrities are donating to organizations like the ACLU or Texas-based nonprofit RAICES that are working to help immigrants in need.

Celebrities have also been quick to use their platforms (especially on social media) to speak out against the conditions at the border as well as President Trump’s current immigration policy.

Some stars like Rosie O’Donnell and Evan Rachel Wood have even donated their time, in addition to monetary donations, to organizations working with immigrants at the border.

Here are 12 celebrities who have donated time or money to help immigrants so far.

ROSIE O’DONNELL HAS SAID SHE’LL ATTEND A VIGIL IN EL PASO, TEXAS TO PROTEST AGAINST THE DETAINMENT OF IMMIGRANT CHILDREN.

During an appearance on Andy Cohen’s Bravo show “Watch What Happens Live,” comedian Rosie O’Donnell confirmed to Cohen that she’ll travel to El Paso, Texas on July 12 for a Lights for Liberty vigil.

O’Donnell has previously tweeted about her support for the organization, which advocates for children and immigrants being detained at the border.

Lights for Liberty describes itself as a “coalition of people… dedicated to human rights, and the fundamental principle behind democracy that all human beings have a right to life, liberty and dignity.” On July 12, the organization is holding a series of vigils across the United States to “protest the inhumane conditions faced by refugees” in detention centers.

FOR HER BIRTHDAY THIS YEAR, MINDY KALING DONATED $1000 TO RAICES, A TEXAS-BASED NONPROFIT HELPING IMMIGRANTS AT THE BORDER.

On Monday, actress Mindy Kaling tweeted that she donated $1000 toRAICES, a Texas-based nonprofit that offers legal aid to immigrants detained at the border.

Kaling’s donation was part of her efforts to donate $1000 to 40 different charities for her 40th birthday this year. The actress also donated to theACLU and Planned Parenthood.

AFTER DONALD TRUMP APPEARED ON JIMMY FALLON’S “THE TONIGHT SHOW” AS A NOMINEE IN 2016, THE HOST LATER MADE A DONATION TO RAICES.

After Donald Trump appeared on “The Tonight Show” in 2016, host Jimmy Fallon was widely criticized for the lighthearted way he engaged with the president, then just a nominee for the Republican party.

Fallon shared in a 2018 interview that he regretted the decision, especially the decision to playfully ruffle Trump’s hair — something many people have said helped to humanize the president in the 2016 election.

The president fired back at Fallon over Twitter after the interview was published, calling the host “whimpering” and telling him to “be a man.”

In response to Trump’s tweet, Fallon shared on Twitter that he was making a donation to RAICES in the president’s name.

COMEDIAN MIKE BIRBIGLIA GAVE OVER $5000 TO RAICES’ FAMILIES TOGETHER FUND IN 2018.

In 2018, comedian Mike Birbiglia told fans on Twitter he would donate to RAICES — specifically the organization’s “ Families Together” fund, which aims to keep families united at the border as they navigate the immigration system — for every retweet he got on his birthday.

Birbiglia revealed the next day that he was able to donate over $5000 to the organization.

GEORGE AND AMAL CLOONEY DONATED $100,000 TO THE YOUNG CENTER FOR IMMIGRANT CHILDREN’S RIGHTS IN 2018.

In 2018, actor George Clooney and his wife, lawyer Amal Clooney,donated $10,000 to the Young Center for immigrant children’s rights, an organization that supports and advocates for young migrants.

“At some point in the future our children will ask us: ‘Is it true, did our country really take babies from their parents and put them in detention centers?’ And when we answer yes, they’ll ask us what we did about it,” the Clooneys said in a statement to the Hollywood Reporter.

On its website, the Young Center says it aims “to change the immigration system so that children in immigration proceedings are recognized as children, and best interests are made a part of the decision making process.”

ANNE HATHAWAY DENOUNCED THE TRUMP ADMINISTRATION’S IMMIGRATION POLICIES IN 2018, AND SHARED THAT SHE MADE A DONATION TO AMERICANS FOR IMMIGRATION JUSTICE.

In honor of Father’s Day 2019, actress Anne Hathaway took to Instagram to denounce the Trump administration’s immigration policies, and share that she’d donated to an immigration rights organization in her father’s name.

“My Dad and I — not to mention my entire family — are disgusted and rocked to our core by the current administration’s shocking decision to separate asylum seeking immigrant families,” the star wrote on Instagram.

Hathaway shared that she was making a donation to Americans for Immigrant Justice in her dad’s name. She encouraged her fans to do the same.

Americans for Immigrant Justice is a nonprofit law firm that “protects and promotes the basic human rights of immigrants.”

According to Americans for Immigrant Justice’s website, Hathaway and her husband Adam Schulman donated $10,000 or more to the organization.

IN 2018, CHRISSY TEIGEN AND JOHN LEGEND DONATED $288,000 TO THE ACLU IN HONOR OF PRESIDENT TRUMP’S BIRTHDAY.

Model Chrissy Teigen and her husband John Legend donated $288,000 to the ACLU in 2018 in honor of the president’s birthday.

In a statement Teigen posted to Twitter, the model and her husband slammed President Trump and his administration’s immigration policies, calling them “inhumane,” “cruel,” and “anti-family.”

The couple in turn praised the ACLU for “defending the rights” of “vulnerable immigrant families” in addition to their work supporting reproductive rights and “holding the Trump administration accountable whenever possible.”

Teigen and Legend shared that each member of their family of four — including their children, Luna and Miles — donated $72,000 to the ACLU, bringing their total donation to over $250,000.

Producer and comedian Judd Apatow denounced the Trump administration’s immigration policies in 2018, saying in a tweet, “The way our country treats children and immigrants is shameful.”

The comedian went on to say that he’d match $10,000 in donations to the ACLU “to help them fight Trump’s nightmarish immigration policies,” and encouraged his followers to donate.

Apatow was ultimately able to give $10,000 to the ACLU of Southern California.

ALYSSA MILANO OFFERED TO FOSTER DETAINED IMMIGRANT CHILDREN AT HER HOME IN 2018.

The actress asked to help foster children who’d been detained at the US border in her letter, which was obtained by the Hollywood Reporter, and said that the children “need compassion, stability and love more than ever.”

“To them, I offer my home and my heart; my love and whatever stability I can give them until they can be reunited with a parent,” Milano wrote.

Cayuga Centers is the New York-based nonprofit that was tasked with helping find foster families for detained migrant children.

“Westworld” star Evan Rachel Wood traveled to Texas in June 2018 to donate her time to organizations working with immigrants at the border.

Using the hashtag # EvanInTX, Wood documented her time spentpicking up supplies for local shelters at Walmart, and playing with immigrant children currently being detained.

The actress urged her followers to also donate to Texas-based organizations fighting for immigrant rights.

Australian singer-songwriter Sia said on Twitter in January 2017 that she would match up to $100,000 of donations to the ACLU, and urged her followers to “help our queer & immigrant friends.”

Actor Zach Braff donated to the ACLU in the aftermath of President Trump’s Muslim immigration ban in 2017.

On Twitter, the actor shared a screenshot of his $25,000 donation with the caption, “Support the ACLU in any way you can.”

Read it via INSIDER here.