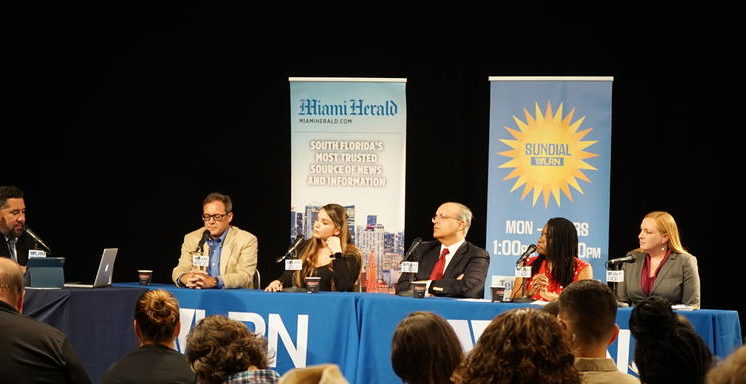 Democratic candidates are in South Florida ahead of the first Democratic presidential debates taking place Wednesday and Thursday nights in Miami. The topic of immigration is already front and center.

Candidate Beto O’Rourke, a former congressman from Texas, and Eric Swalwell, a representative from California, have planned visits to the Homestead Childhood Detention Facility, the largest for-profit child migrant shelter in the United States.

While much of the debate over immigration policy has focused on the southern U.S.- Mexico border, in South Florida the detention centers hold thousands of migrant children in what is decribed as ‘prison-like’ conditions. There have also been significant changes in immigration policy regarding Cuba and potential changes to the Temporary Protected Status (TPS) for Venezuelans, Haitians, Nicaraguans, Hondurans, and other groups.

WLRN: There was a report now of another sexual assault at the Homestead Childhood Detention Facility, I believe this is 7 now since August. What’s going on at the facility?

MADAN: It’s a dark abyss when it comes to numbers or statistics or any cases at all. The federal government won’t release that. All we know is that sexual assault is investigated by the FBI. Those numbers are not public record. The only reason we even know about these sexual assaults is because they have been reported to the Department of Children and Families. But Florida Department of Children and Families (DCF) doesn’t investigate them at all.

WLRN: Remind us who runs the center.

MADAN: It’s a private company called Comprehensive Health Services and it’s a for-profit company that has since opened up two more (facilities) in Texas.

How long do those children stay at the center?

MADAN: That’s a really tricky answer because on average it’s more than two months. But that answer is really misleading because Congress has talked to kids that have been there more than eight months. So getting the average is not the best number to represent how long these kids are actually staying in there.

Tim Padgett, how do you see this issue playing out not just in the debates but in the election season?

PADGETT: President Trump has a very tricky balancing act to do here politically on this. On the one hand, as bad as we consider these images and these reports of the conditions that these children are living in, again I go back to his base. What they want is deterrence and they see these situations, particularly the family separation situation, as a valid form of deterrence to a punishment: to keep immigrants away from the United States. He’s got to galvanize his base for this upcoming election and that’s how he does it. But on the other hand, he also has to realize that a majority of the people in this country do favor comprehensive immigration reform and they are repelled by these images.

MORA: It’s a deterrent. In fact, the policies of family separation had been in effect for some time and, in fact, the numbers kept coming or increasing. But you raised an important question Luis that’s not often talked about. How is this affecting the image of the United States as a country that we’ve always claimed was a country with a foreign policy based on principles and morality and all the rest? It’s really changing. I travel in Latin America quite a bit and the people are just astounded to see that the United States is doing these kinds of things right.

There’s a number of reasons for that, but I think this issue is having an impact because they’re seeing the news in Latin America carry this all the time. This issue of parents being separated from their children and the perception that the United States is kidnapping these kids. That’s the language they’re using in the region because then they deport their parents and they stay with their children. That’s kidnapping and it gets repeated over and over again. Networks keep repeating that on cable news in Latin America really hurting our image in the region.

You can watch a Facebook live of Monday’s town hall event focusing on immigration here.

Read and listen via WLRN here.