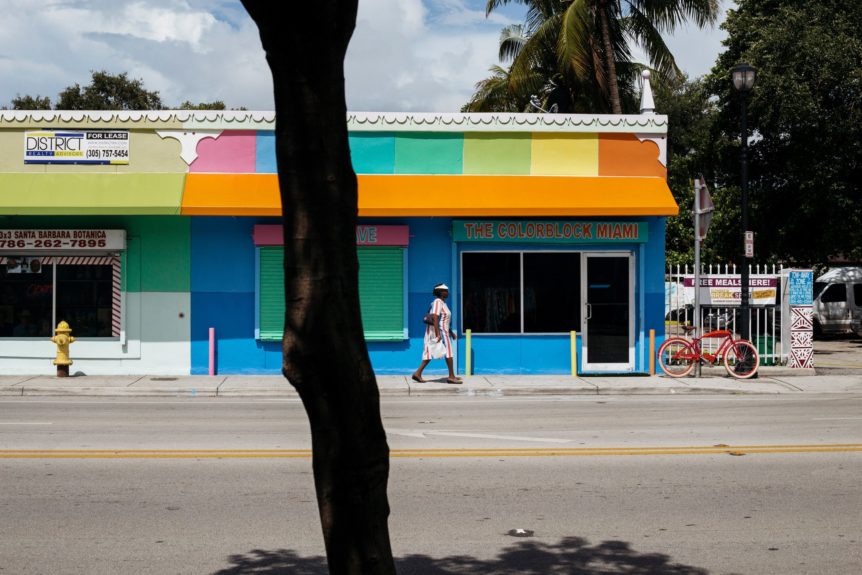 They say, “Whenever Haiti sneezes, Miami catches a cold.” But, in the time of COVID-19, the reverse is also true.

Isuspected that things might be getting serious when, at a memorial for an elderly friend, who’d died long before covid-19 was a pandemic, many of us tried to figure out how to greet one another. The scenario might have amused our friend, who’d died of natural causes, in the arms of his wife, at the age of ninety-three. His memorial was one of the last gatherings on the main campus of Florida International University, which soon afterward moved to online learning. The remarks on our friend’s life and work were preceded by a public-service announcement reminding the sixty or so of us to wash our hands frequently, cough into our elbows, and avoid close physical contact.

“It will be hard not to touch,” we said to one another. “We’re Haitians.” In saying this, we were perhaps echoing what so many other groups around the world had said on similar occasions: “We’re_______.” We did what we could with elbow bumps, but there were occasional lapses into tearful hugs and kisses, until someone jokingly suggested a butt bump, which a few of us tried, with mutual consent. We were not yet fully aware that there were people around the world dying painful and lonely deaths, some attached to ventilators, and far from the arms of their loved ones.

Saying that we’re Haitians might also have been an acknowledgment of our past collisions with microbes. In the early nineteen-eighties, the Centers for Disease Control named four groups at “high risk” for acquired-immunodeficiency syndrome: intravenous-drug users, homosexuals, hemophiliacs, and Haitians. Haitians were the only ones solely identified by nationality, in part because of a number of Haitian patients at Jackson Memorial Hospital, in Miami. In October, 2010, nine months after a magnitude-7.0 earthquake struck Port-au-Prince and the surrounding areas, Nepalese U.N. peacekeepers stationed in the north of Haiti released raw sewage from their base into one of Haiti’s most used rivers, causing a cholera epidemic that killed ten thousand people and infected close to a million. As of this writing, Haiti has had only fifteen confirmed cases of covid-19, but, fearing that the disease could ravage the country and its fragile health infrastructure, Haiti’s President, Jovenel Moïse, declared a state of emergency, imposed curfews, and closed schools and airports.

During the weeks before Haiti had any covid-19 cases, friends and family members there would text and WhatsApp-message me and others to tell us to watch out for the disease. It was a reversal of sorts, in which our fragility now seemed greater than theirs. They’d had more experience with day-to-day disruptions, including months-long lockdowns due to political protests. This, too, will pass, one poetic cousin, a fellow sunset lover, kept writing, increasingly concerned about me as the death numbers rose in Florida. “I hope you and your husband and your children will live a long life. I hope when you finally die at a very old age, they’ll say you had eaten a lot of salt.”

“Or had seen a lot of sunsets,” I replied.

When I first moved to Miami’s Little Haiti neighborhood, in 2002, I would often hear my neighbors say, “Whenever Haiti sneezes, Miami catches a cold.” That is, whatever was happening in Haiti could have ripple effects in Miami homes, workplaces, schools, barbershops, and churches. The reverse is also true. Already, hundreds of Miami Haitians, like many other Caribbean and Latin-American immigrants who work in the tourism, hospitality, and service industries here, have lost their jobs owing to ­covid-19. Not only will they have trouble providing for themselves; they will also be unable to send money back home to those who count on them to survive. And Miami is home to a large number of Haitian-American medical personnel, who could become ill as the pandemic spreads.

The ripple effect of lost wages, and, even worse, lost lives, in immigrant communities will gravely affect the economies of our neighboring countries, according to Marleine Bastien, the executive director of Family Action Network Movement, a community organization that works with low-income families. Bastien and her staff were forced to temporarily close their offices, but their mostly elderly clients kept showing up to ask for help. She has been trying to work out a system for her center’s case managers, mental-­health professionals, and paralegals to provide services by phone or on WhatsApp. “Poor immigrant communities already have a great deal of need,” she says. “This crisis will only multiply the need.”

Complicating matters is the Trump Administration’s recent Public Charge rule, which can lead to green cards being denied to people seeking and receiving public benefits. Cheryl Little, the executive director of Americans for Immigrant Justice, a nonprofit law firm in Miami, is also worried about how covid-19 will affect vulnerable immigrants, particularly those in detention. “Misinformation, xenophobia and panic have been running rampant in the wake of this pandemic,” she wrote in a letter to her organization’s supporters. “Detained children and adults in crowded facilities have limited control over their access to hygiene and adequate health care. Many of our clients are immunocompromised. People who are detained are packed in like sardines in these places, which are petri dishes for the virus,” she told me. “We have countries that have now closed their borders and are refusing to take deportees, which means that people will simply languish in detention and continually be vulnerable to the virus.”

One thing that this virus has shown is that, when anyplace in the world sneezes, any one of us can catch a cold, and a deadly one. I am still amazed at how quickly everything has changed since that memorial service, just a few weeks ago. Our friend had lived a long and beautiful life. He’d suffered some, but he had also experienced a great deal of joy. He had eaten a lot of salt, as my cousin would say. Now I find myself hoping that my neighbors, my friends and family members, my children, all of us will get to eat just a little bit more salt, and not suffer too much while doing it.

I remember telling a friend at the memorial service how I was planning to be in Chile this week, with my family, to launch the Spanish edition of one of my books and to visit some members of the Haitian community there. My oldest daughter would be turning fifteen while we were in Santiago, and, because her birthday often falls during spring break, she’s come to see these purposely timed work trips as special excursions for her. This week, while we were observing Miami’s stay-at-home order, I asked my daughter what she wanted to do for her birthday, and she said that, just as we had done a few times before, she wanted to drive someplace pretty to see a beautiful sunset. Maybe next year we will be able to do that