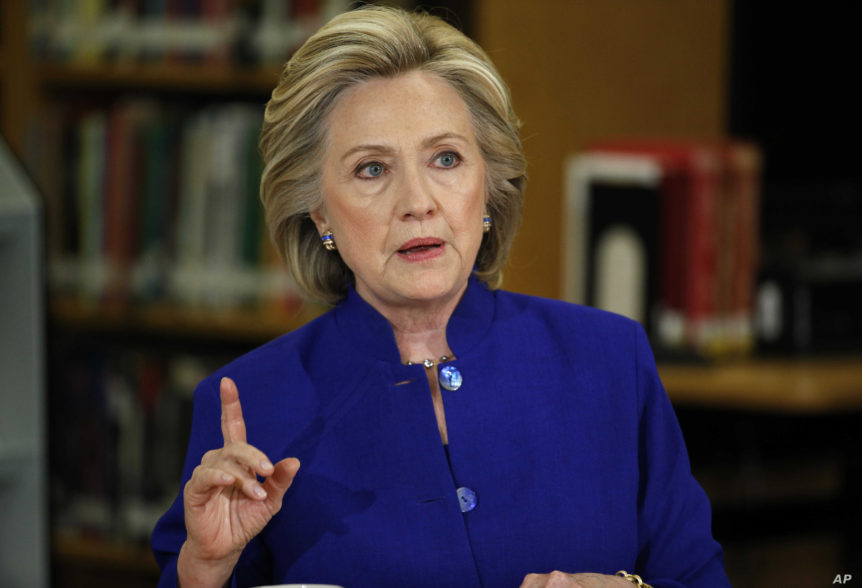 Democratic presidential candidate Hillary Clinton says the U.S. needs to fix its broken immigration system, and that any legislation needs to include a path to “full and equal citizenship” for the country’s undocumented population.

At a campaign stop Tuesday at a high school in Nevada, Clinton singled out her potential Republican rivals, saying that not a single Republican “is clearly and consistently” supporting a pathway to citizenship.

With an increasingly large pool of Republican candidates who oppose legislation leading to citizenship for some or all of the estimated 12 million people without legal authorization, Democrat Clinton is hoping to get the attention of immigration activists and Latinos – a voting bloc both parties are courting ahead of the 2016 election.

But to convince voters, she will need to be specific about how she would change the system if elected, analysts tell VOA.

“The voters who care about this want details,” Darrell M. West, vice president and director of Governance Studies at the Brookings Institution said. And to win over the coveted Latino voter cohort, candidates need to back full immigration reform.

Nevada doesn’t have the largest undocumented population in the country. It’s not even in the top 10 states. But it had the largest share of unauthorized workers in 2008, according to a Pew Hispanic Center study, with 12 percent of its labor force working without legal documents – more than double the national rate of 5.4 percent and topping traditional immigrant hubs like California, Arizona and Florida.

It’s also a swing state. Both parties are looking to attract Nevada voters.

The Republican party has not been successful in courting Hispanics in recent elections. But West said that if one candidate in the GOP pool takes a firm pro-immigration stance, “that could be successful strategy,” leaving the other hopefuls to carve up the remaining votes.

Senator Marco Rubio of Florida, a Republican presidential candidate, has backed off the notion of comprehensive immigration reform that he failed to push through Congress as part of the bipartisan “Gang of Eight” group. The son of Cuban immigrants now backs piecemeal legislation to address reform. Dividing up the legislation concerns some reform advocates, who worry that some immigrants will be left behind with the fractured approach.

Florida’s former Republican governor Jeb Bush, who also has announced his candidacy, said he supports a way for undocumented immigrants to work legally in the country. But he has not called for creating a path to citizenship.

Cheryl Little, head of the Miami-based Americans for Immigrant Justice, believes Democrats and Republicans need to lay out exactly what they intend to do – or not – for the millions of immigrants living illegally in the country.

“Someone can say ‘path to citizenship’ – but if it’s enforcement first, then many folks will likely die before they get their green cards,” says Little.

Despite bipartisan efforts at immigration reform on Capitol Hill in recent years, the only substantial change, despite calls for an overhaul to the system, was a 2012 executive order by President Barack Obama. Deferred Action for Childhood Arrivals grants a temporary reprieve from deportation to younger immigrants with no legal status. On a visit to Nevada in November, Obama announced an expansion to DACA that would cover a wider age range of immigrants, as well the undocumented parents of U.S. citizens. The rollout for that plan, set for early 2015, has been stymied at the state level. It’s also where he touted comprehensive immigration reform in January 2013, fresh off a successful reelection campaign.

Lynn Tramonte, of the immigrant advocacy group America’s Voice, says the “immigration voter community is pretty skeptical of promises being made during campaigns.”

Part of that hesitancy comes from promises Obama made during his first run to prioritize immigration reform. The issue’s importance slipped during his tenure, overtaken by health care – and Tramonte says voters who believe in pro-immigrant reform remember that.

Nevadans who want changes to the system “are going to want to see bold leadership,” says Tramonte. “Is [Clinton] able to communicate a vision on immigration that can inspire voters who show up to vote on this issue?”