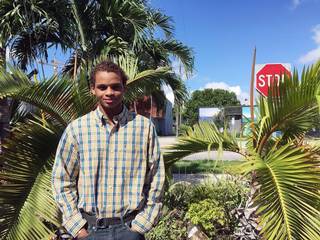 When Fort Lauderdale high school senior Minaldy Cadet got his acceptance letter from Boston College in March, he thought the life he had dreamed of was finally within reach.

“It was incredible. One of the best feelings ever,” Cadet recalled. “As soon as I saw their email, as soon as I opened it up and read the congratulations, I just instantly started running around my house saying, ‘Yah! I got accepted!’”

The St. Thomas Aquinas High School honor student had not only gotten into his top-choice school, he had been awarded an almost full scholarship.

But the family soon discovered that an immigration paperwork mistake 17 years ago could derail Cadet’s dreams and his family’s future.

The Cadets had immigrated to South Florida from Haiti in 1999, fleeing violence and political unrest, when Minaldy was 2 years old. They had settled in Fort Lauderdale where Cadet’s father, Jean, an accountant back home, got a customer service job at T-Mobile and worked hard to put Cadet and his three sisters through Catholic school.

Jean Cadet also hired someone he thought was an expert in immigration matters to help his family apply for asylum. But the man he paid to fill out the asylum paperwork turned out to be a fraudster, and submitted the wrong type of application.

A month before classes started at Boston College, Cadet and his parents met with an immigration officer in South Florida to interview for permanent residency, also known as a “green card” — a requirement to collect the school’s scholarship.

BEFORE MY WHOLE SITUATION, FOR ME BEING ABLE TO GO TO BOSTON COLLEGE MEANT THAT THE WORLD OF POSSIBILITIES WAS ENDLESS. I COULD LITERALLY BECOME ANYTHING I WANTED.

Minaldy Cadet, a student from Haiti who grew up in South Florida

After reviewing their documents, however, the immigration official determined that the family was ineligible for permanent residency because of the bad legal advice. As a result, Cadet lost $64,000 in scholarship money and financial aid.

“It really broke our spirits,” Minaldy Cadet said. “Before my whole situation, for me being able to go to Boston College meant that the world of possibilities was endless. I could literally become anything I wanted. I’ve just got to study hard, get great grades and just do as well as I can. And now coming into this realization that I’m in this situation, I realize how limited it really is when you don’t have the amount of benefits a citizen or a natural-born citizen has.”

It’s a drama that plays out in many immigrant communities in the United States. Many young adults brought to the country as children face major financial challenges and other obstacles if they aspire to college without citizenship or permanent residency. A 2012 policy known as DACA, which stands for Deferred Action for Childhood Arrivals, granted some immigration relief, including eligibility for work permits, to those who came to the country as minors, but it is a only temporary fix.

In addition, only 16 states, including Florida, offer in-state tuition for young immigrants who attended high school in the state where they are applying for college. For many others, having to pay out-of-state tuition in the place where they grew up makes a university degree prohibitively expensive.

“A lot of really bright young immigrant kids who don’t have legal status end up working full time and then taking a college course here and there as they can afford it,” said Cheryl Little, the executive director of the Miami-based advocacy group Americans for Immigrant Justice. “It’s not only a tragedy for them, it’s a great loss for our country. We’ve already invested in their education, most of these kids have lived here since an early age, and most of these kids have a lot to contribute. They’ve been afforded an education here in the United States and we should be able to reap the benefits now, not threaten them with detention and deportation.”

In Cadet’s case, he hoped to major in biochemistry and someday become a doctor. It was a dream that got him through life in what his family says was a rough neighborhood, where robberies were frequent and their home was broken into twice. Cadet stayed out of trouble by spending his free time studying at home and training for track and field.

Cadet and his parents currently have temporary protected status, which is like a temporary form of asylum. They have had this status since 2010, when a major earthquake struck Haiti. Prior to 2010, Cadet was technically an undocumented immigrant because of the earlier paperwork mistake. The person Cadet’s father hired to fill out the asylum paperwork applied for an immigration status the family was ineligible for, resulting in the Cadets unknowingly missing the limited window of time they had to apply for asylum upon arrival.

“It’s like he doesn’t have a country,” Cadet’s father said. “He thought here was his country because that’s where he was raised, but it’s not. And he doesn’t know where he came from so it’s like we don’t have a place to live.”

That is a common sentiment among young immigrants, said Julio Calderon, a youth organizer for the Florida Immigrant Coalition. “This is where they grew up and this is the only country they know. They feel American, but then the U.S. doesn’t feel that they’re American enough to be able to have these opportunities.”

Calderon added that access to college funding and scholarships is a major concern for immigrants. “It’s very common seeing students with a lack of [immigration] status getting scholarships and then being denied a scholarship because they’re not citizens,” he said.

Two weeks before classes started at Boston College, the Cadets drove all the way to Massachusetts to plead, unsuccessfully, with the financial aid office.

Boston College’s financial aid office told the Miami Herald they could not talk about individual students because of privacy laws. In an email chain Cadet shared with the Herald, college financial aid staff said they had made every effort to find a way for Cadet to accept the scholarship funds without a green card, but were unable to change the policy.

At the last minute, Cadet’s father decided to take out two loans to come up with the $36,000 needed to pay for the first semester of school. After that, the family doesn’t know what they’re going to do to put Cadet through another three and a half years.

Cadet initially applied to several Florida universities with cheaper tuition, but chose Boston College in part because with his scholarship it was the most affordable option. By the time Cadet learned that he wouldn’t be able to get his green card, it was too late to enroll in the Florida universities for this school year.

Jean Cadet said he was doing everything he could to pay for Minaldy’s schooling, but was restricted by his limited finances. “It’s killing me because he came here at 2 years old so he didn’t choose to be in that situation.”

Cadet left for Boston last week, the day before classes started, but not with the excitement he had been anticipating. “I have really mixed feelings because I know the amount of sacrifice for me being there right now,” he said.