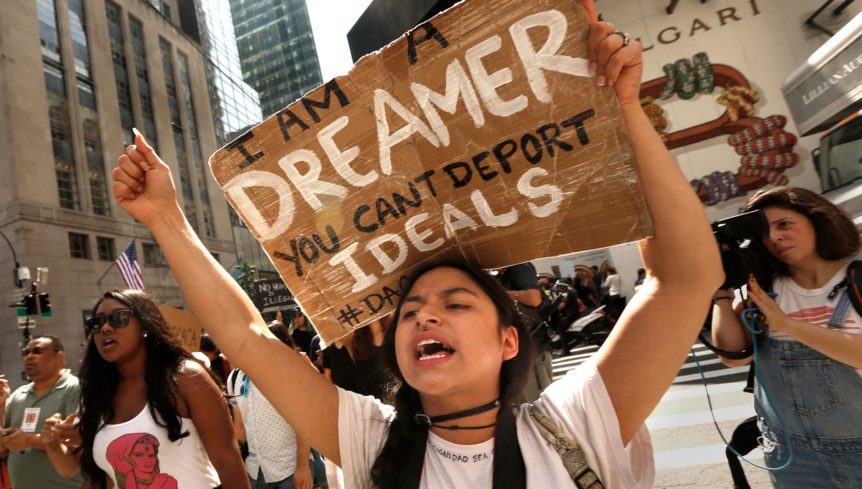 A few months ago, I spent an evening listening to the stories of some Miami-based Dreamers, bright and engaging young people who were brought to the United States by their parents when they were children, and who’d been undocumented until June of 2012, when President Barack Obama signed the executive order DACA, or Deferred Action for Childhood Arrivals. The evening was hosted by Americans for Immigrant Justice, an immigrants-rights organization that has served as pro-bono legal counsel for many Dreamers, including Monica Lazaro, who was the featured speaker.

Anyone who has ever heard Dreamers speak knows the arc of most of their stories. When they arrive here, they embrace their new lives and, by language, habit, and culture, become American. Many immigrant families are mixed-status families. Some Dreamers have no idea that they’re even undocumented until some unforeseen obstacle is placed in their path—until they can’t get a driver’s license, go to college, or get a job.

Monica Lazaro’s story was particularly heartbreaking. She was born in Honduras, in San Pedro Sula, which has been called one of the most dangerous cities in the world. When she was a girl, children and teen-agers were being murdered, by both warring gangs and police; Monica’s father, a construction worker, got death threats from a neighborhood gang. Her parents fled to Miami on tourist visas with Monica and her brother. Too terrified to return, they remained in the U.S. after their visas expired.

Monica was in high school when her mother, who worked as a maid, became ill with colon cancer. Even while helping to take care of both her mother and her younger brother, Monica graduated at the top of her class.

When her mother died, at the age of forty, an anonymous donor paid Monica’s tuition to Florida International University. This past year, Monica completed her bachelor’s degree in biological studies. She is now working as a research associate at Nova Southeastern University. Monica was planning on getting her master’s degree in public health, but, now that DACA has been rescinded by the Trump Administration, she may not be able to.

After the decision to end DACA was announced yesterday, Monica released the following statement, via Americans for Immigrant Justice: “Going to a state university, driving and working are things my generation complains about or takes for granted. For me, it is a privilege to have the opportunity to do any of them. Because of DACA I no longer fear walking in the streets or fear deportation; a fear that undocumented individuals carry with them every moment of every day. The end of DACA is the end of that privilege. It is the end of peace, and a guarantee of deportation to a country my parents fled to save our lives.”

Monica’s is one of eight hundred thousand stories, eight hundred thousand dreams deferred, if not completely destroyed. These dreams have already been nurtured by the Dreamers themselves, as well as by this country, where many have gotten their primary, secondary, and even university educations. For those of us who know Dreamers, who live with or near them, who work with them, who love them, it’s puzzling that their value to this country is being so casually discarded. The Dreamers I know have the drive of pioneers. Their determination is born out of urgency. They can’t, as Monica has said, take for granted their right to be here. They earn it every day.

Taking away DACA is not just a loss for Dreamers; it is this country’s loss as well. Should Monica be deported, the United States would lose out on the kind of researcher who might, for example, long to cure the type of cancer that killed her mother. Ending DACA, according to a number of prominent American business leaders, would cause the United States to lose $24.6 billion in tax revenue and $460.3 billion from the national gross domestic product over the next ten years. Would both Attorney General Jeff Sessions, who made the announcement to rescind DACA, and President Trump, who’s continuously teased Dreamers with the possibility of keeping the program, be so willing to risk this kind of economic deficit if the beneficiaries were not mostly brown and black?

Yesterday I wanted to reach out to the Dreamers I know who were devastated by this decision. Many in the Miami area, where I live, were preparing for what we’re being told might possibly be another catastrophic storm, Hurricane Irma, which is headed to South Florida this weekend. The devastation of Hurricane Harvey in Texas is still heavy on our minds; for undocumented Texans it was not just a natural disaster but an immigration nightmare—many feared that they would be turned away from shelters, or even taken into custody. I worry that people with precarious immigration statuses might have the same fears here in Florida, and end up in even more danger.

I know that there will be Dreamers, among others, both seeking and offering shelter, as well as life-saving services in hospitals, nursing homes, and rescue crews, just as they have been doing these past five years. I think of Alonso Guillen, the Dreamer who came to the U.S. from Mexico at the age of fourteen, who died, last week, while attempting to save fellow-Texans who were trapped in their flooded homes in Houston. Guillen saw America as his country, and the people in need as his people.

Recently, I heard another Dreamer speak. Her name is Gaby Pacheco. I first met Gaby in 2010, when she and three other Dreamers—Juan Rodriguez, Felipe Matos, and Carlos Roa—walked from Miami to Washington, D.C., to highlight the need for legislation that would not only halt the deportation of Dreamers but offer them a path to citizenship. Their fifteen-hundred-mile walk lasted four months.

Gaby came to the U.S. with her family from Ecuador when she was eight. She has testified before Congress and given commencement speeches, but, after President Trump’s election, she felt she was waging a new battle.

“I am broken, but I am not defeated,” she said at an Americans for Immigrant Justice dinner last February. “They tried to bury us, but we will rise through this.”

Some Dreamers will rise, and others, to the detriment and shame of this country, will not—unless Congress finally does the right thing and makes it possible for them to stay in the United States, the only country most of them remember, the one to which they’ve contributed their labor, energy, ingenuity, and, yes, their dreams.

Read it on The New Yorker here.