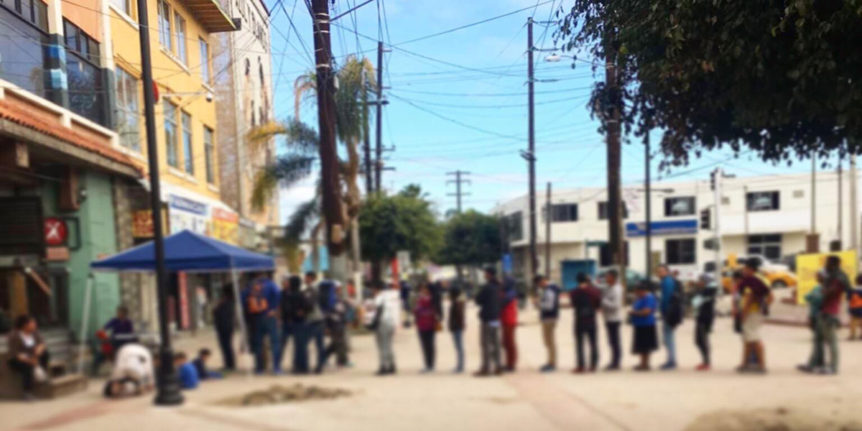 Our orientation with Al Otro Lado started with one of the volunteer organizers saying that the daily grind is like “flying a plane that is on fire and has no engines.”  Somehow these tenacious organizers have created an invaluable service for migrants who have been waiting for months to seek asylum at the port of entry.  A mish-mash of volunteers, donating anywhere from a couple of days to a few months, are providing Know Your Rights presentations, legal observation, and individualized preparation for credible fear interviews.  Most importantly, expectations are being managed about what to expect on the other side.

As immigration practitioners in Florida, we see the other side of the process for those who make it through.  We see what prolonged detention can do psychologically to people in fear for their lives.  We see the roulette that happens where the likelihood of success of a case is dependent on what jurisdiction or judge the immigrant is assigned.  We see the incredible hurdles immigrants face to try and win their cases, and we know of the treacherous journeys they undertook to flee their countries, but as immigration attorneys practicing in the US we often gloss over the seemingly simple act of availing oneself of the asylum safeguards that exist under international and domestic laws. We have truly learned that this is anything but simple and has become even more difficult in recent months.

Tomorrow, after we conduct legal observations at the Chaparral port of entry, we will report some of the horrendous practices we have learned about the process on this side of the border, but today we want to talk about those who are preparing to make their initial plea for protection, through what is called a Credible Fear Interview.  This is the first step, where if you “pass,” you move on in the asylum process and will have the opportunity to have your case heard before an immigration judge, but if you “fail” you will be subject to expedited removal with no opportunity to plead your case.  So much rides on these interviews, and it is vital that immigrants understand the basic requirements of asylum and the necessity for honest and consistent testimony.  Today, we, along with other volunteers, provided services to 41 individuals from Honduras, Mexico, Guatemala, El Salvador, Haiti, Cameroon, Sierra Leone, Eritrea, and Somalia.  We saw issues ranging from transgender persecution claims to unaccompanied minors.  We dealt with custody issues and the fears of being separated from one’s children.  We counselled parents on making the Sophie’s choice of seeking asylum and potentially being separated from their children or keeping their family together on this side of the border and living in fear and hiding.  We connected the most vulnerable to resources and heard countless stories of trauma and death.  It was sobering, but in some ways not unexpected or that different from what we see every day as immigration attorneys on the front lines.