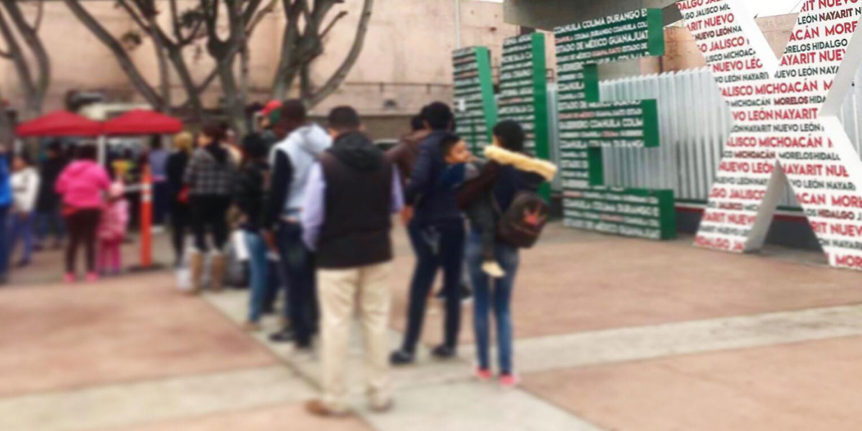 Day 4 began early for us, 7 a.m., but many migrants, replete with suitcases and their children, arrived before daylight broke at El Chaparral, the PedWest footbridge to the United States, to see if this would be the day their number would be called. The visual was surreal. To an unknowing observer this could be any morning at typical Mexican plaza. There were taco stands and wafting smells of coffee and Mexican foods. Squealing children ran and played. But overall there was a heaviness in the air. Strain on the faces of adults and a palpable tension. How many numbers would be called and would they be the lucky ones? A colleague this morning made reference to the Hunger Games and it was an eerily apt reference.
We had heard generally about a number system, but never could we have predicted the precarious situation that exists in this plaza every morning. Over the last two days, we have learned the intricacies of this metered number system that was created years ago following an influx of Haitians who made their way to the United States through Latin America, and further exacerbated by the recent caravans. The US government purports that it does not have capacity to process all of those seeking asylum at border ports entry. Under US and international law, anyone fleeing their country of origin should have access to a port of entry to express their fear and request asylum, thus triggering the credible fear interview we discussed yesterday. Customs and Border Protection (CBP) has gone so far as to physical impede these asylum-seekers’ access to the brick-and-mortar port of entry.  Instead of allocating resources to facilitate this process and ensure all of those in fear of return are processed quickly and efficiently, a backlog list system has grown. The “list” has morphed into an illegal and ad hoc procedure run by the migrants themselves, while strictly overseen by an agency called Grupo Beta, which is the “humanitarian” arm of Mexican Immigration, also known as the National Institute of Migration.

The system that has evolved in recent months is mind-blowing. New asylum-seekers who have not received a number, line up in the wee hours before a rickety table where their information is logged into a tattered notebook by the “list-managers,” themselves asylum-seeking migrants, while members of the Grupo Beta facilitate the overall process. Each number, represents a subgroup of 10 individuals. New numbers are being assigned in the 1900s which means that this system has accounted for approximately 1,9000 people. Around 9 a.m., an opaque communique occurs where CBP advises of their capacity for the day, which can vary from zero to one-hundred with no seeming rhyme or reason. Despite the seemingly simple number system, exceptions seemed to be made—some for those who had been called in previous days and some who faced an immediate threat in Tijuana. It was unclear who was ultimately making those decisions or what criteria was being considered.

This morning two numbers were called, which meant that 20 individuals would be shuttled by Mexican officials to the San Ysidro port of entry. Volunteers frantically provided last minute preparations for the credible fear interviews. Anticipating their imminent detention, we explained that their belongings would be confiscated, including their phones and their documents.  We lent out sharpies and encouraged them to write the phone numbers of loved ones on their appendages. In preparation for the infamous hieleras, or CBP detention “ice boxes,” where they will go following the port of entry for processing, we suggested that they wear their most warm layers of clothing close to their skin as they would likely be forced to give up their outer layers, even the children.  We advised them to change their pesos to dollars for funds that could be accessed while detained. The most heart-warming yet heart-wrenching experience was seeing a young girl give away her toys to other children as today was her day to board the shuttle to the port of entry.

As the list-managers announced that no more people would be called today, the crowd became agitated. Bystanders groaned and even yelled about the unfairness of the system and questioned why some were able to go today when their number had been called in the previous days. Following a tense debate, the group voted on some issues and dispersed, only to repeat this charade tomorrow.

As we walked back towards our home base for the day, all we could think is are they really lucky?  What lies ahead could be family separation, indefinite detention, and potential deportation to the very countries they are fleeing. We told them this is what awaits them on the other side, but they seem undeterred. What does that say about the magnitude of their fear?