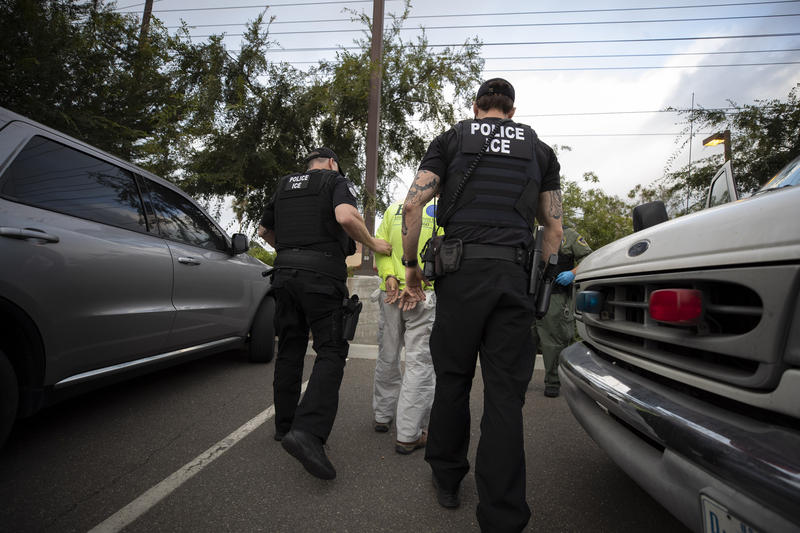 A federal judge has temporarily blocked a portion of a controversial Florida law that called on local police to cross state lines to assist federal immigration officials but left in place a provision where the officers would have to hold undocumented immigrants until the feds pick them up.

In an order issued on Monday — one day before enforcement of the new law is slated to take effect — Miami U.S. District Judge Beth Bloom shot down a small piece of the state law requiring Florida police officers to cooperate with federal immigration enforcement agencies, like U.S. Immigration and Customs Enforcement. The Florida law — SB 168 — will continue to forbid sanctuary cities.

Bloom ruled that local police cannot transport undocumented immigrants across state lines at the request of the feds, saying it is strictly the job of the federal government. Her ruling can be appealed.

However, her ruling maintained that local police departments would still be required to hold arrested people in jail for an extra two days until ICE picks them up.

She cited laws passed by Congress as opening the door for that kind of local and federal cooperation, shooting down a core argument of the lawsuit, filed by immigration advocates and the city of South Miami.

“Congress gave a clear indication that it sought to facilitate, not preempt, the type of cooperation that SB 168 mandates,” Bloom wrote in the order.

Under the law, local police departments will be required to hold undocumented immigrants who have been detained for an additional 48 hours, until ICE arrives and transports them to a federal detention center. People who have fully served their local sentence or posted bond will also be detained for the extra two days.

The City of South Miami and several immigrant advocacy groups filed the case against Gov. Ron DeSantis and Florida Attorney General Ashley Moody in June, hoping to stop the controversial legislation. Some of the groups that sued include the Florida Immigrant Coalition, Farmworker Association of Florida, WeCount!, Americans for Immigrant Justice, Hope Community Center and QLatinx.

DeSantis signed the bill in June, the law went into effect July 1 and it will be enforced by police as of Tuesday. The plaintiffs were represented by the Southern Poverty Law Center, the Community Justice Project and the University of Miami School of Law Immigration Clinic.

The law allows the governor or attorney general to take action on elected officials who don’t comply with the law, including removing them from office.

At a hearing last week, Paul Chavez, an attorney with the Southern Poverty Law Center, argued that the law’s requirement that police use “best efforts” to help in immigration enforcement was too vague to enforce.

“If I fail to abide by the provisions of this law, some of which are comprehensively vague, the governor may remove me from office,” said Stoddard before the court hearing.

Judge Bloom wasn’t persuaded: “The Court believes ‘best efforts’ to be sufficiently clear as to what conduct is or is not required for a facial pre-enforcement vagueness challenge,” reads the order.

In the complaint, South Miami argued that the state law conflicts with a 2017 city resolution, which said city officials would not “entangle” themselves with immigration officials “as a matter of course.” The city passed the resolution after South Miami police found themselves involved in immigration enforcement actions. City leaders wanted to avoid repeating those episodes.

“These incidents involved a request from ICE that [the South Miami Police Department] enter a South Miami resident’s home, at gunpoint if necessary, to provide the individual to ICE, ICE participation in SMPD checkpoints for driving under intoxication, a local arrest, and an investigation by SMPD based on suspicion of immigration fraud,” the city argued in the original lawsuit.

At last week’s court hearing, the plaintiffs argued that Congress never intended to let local police hold undocumented immigrants for an extra 48 hours when it passed a 1986 law that started immigration detainers. “It was for information sharing,” said attorney Alana Greer, with the Community Justice Project.

In 1996, Congress passed another law that let local officials detain immigrants, but only if specific officers in the police departments receive training from the federal government, and were subject to federal oversight.

The new Florida law mandates that police detain immigrants if they are asked to, even if they aren’t part of this training program.

“The state said, ‘Forget about the federal law, we’ll create our own way to bypass this whole system that Congress created,’ ” said Greer. “The state doesn’t have the power to do that.”

“Your honor, I don’t know,” Percival said on the third try. Instead, he cited administrative moves that have paved the way for the broad use of 48-hour detentions.

But in the order released on Monday, Bloom cited a 1996 statute that she said “leaves numerous cooperative avenues open for law enforcement officers to participate in the immigration efforts of federal officers.”

“This means If ICE tells you to drop everything, patrol, protection of schools, criminal investigations, you have to go play Cowboys and Indians with ICE,” said Stoddard. “Local law enforcement is secondary to immigration enforcement.”

To stay in compliance with the new Florida law, law enforcement offices in all 67 Florida counties will be required to enter into formal agreements with ICE. In the agreements, ICE promises to pay local governments $50 for holding an immigrant up to an extra two days. A group of Florida sheriffs were the first in the nation to reach these kinds of agreements with ICE in 2017. Under the new law, they are mandatory.

This part of the law has drawn protest from some departments that feel they were pressured into entering into agreements with ICE. . Before the law was passed, the Alachua County Sheriff’s Office did not honor requests from ICE to detain people, because it felt the requests do not meet the “probable cause” threshold needed to keep someone in custody.

In June, the department entered into a formal agreement with ICE.

“We felt that we would get sued,” Art Forgey, a spokesman for the Alachua Sheriff’s Office, told WLRN at the time. “I don’t believe we would have entered into this agreement without the governor and Legislature doing this.”

“As soon as the community perceives the local police as agents of ICE, they stop talking to the local police, and that makes everybody less safe,” he said. “Now, there will be a whole segment of our community unwilling to report crimes. It’s already the case in a lot of immigrant communities, and this makes it worse.”