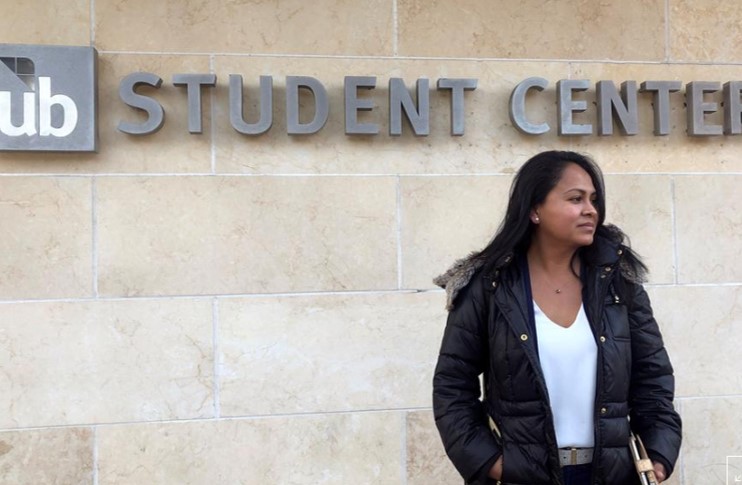 BALTIMORE (Reuters) – When Maricruz Abarca learned three years ago that she had been given the legal right under a U.S. government program called Deferred Action for Childhood Arrivals to work in the United States and avoid deportation, she started to cry.

After years of living illegally in the shadows after moving to the United States from Mexico at age 15 to join relatives in New Jersey, she finally could make concrete plans for the future.

“Having the opportunity to be legal and without fear of deportation, it was just a big plus – and going to sleep every night without thinking about what was going to happen with my kids,” Abarca, 31, said in an interview on the campus of the University of Baltimore, where she is studying with aspirations of becoming a lawyer.

Abarca is one of roughly 660,000 people, dubbed “Dreamers,” covered by DACA, which was created to protect immigrants who entered the United States illegally or overstayed a visa as children. DACA was implemented in 2012 by Democratic President Barack Obama. Republican President Donald Trump in 2017 moved to rescind the program, though he was blocked by various court rulings.

For Abarca, DACA has provided concrete benefits. It helped her become eligible for lower in-state college tuition and obtain a license as a used-car dealer. It also provided security for her family, including her three children – all American citizens by virtue of being born in the United States. Abarca dreams of one day becoming mayor of Baltimore.

But Abarca’s status – along with all the others protected by DACA – is under threat. The U.S. Supreme Court, whose 5-4 conservative majority includes two justices appointed by Trump, is scheduled to hear arguments on Tuesday to decide the legality of Trump’s plan to rescind the program and expose the DACA recipients once again to the threat of deportation.

The justices will hear the Trump administration’s appeals of three lower court rulings – in California, New York and the District of Columbia – that found that the president violated a U.S. law called the Administrative Procedure Act in seeking to kill DACA. Trump has made his hardline policies cracking down on legal and illegal immigration a centerpiece of his presidency.

Abarca is one of the DACA recipients who sued the administration. She said she plans to participate in a rally outside the Supreme Court on Tuesday, her 32nd birthday.

“The future of thousands of ‘Dreamers’ … are basically in their hands,” Abarca said of the justices. “We are just right there in limbo not knowing what’s going to happen in our lives.”

If the program is terminated, “I’m going back to the shadows,” Abarca added.

Adonia Simpson, a lawyer for the Miami-based immigrant rights group Americans for Immigrant Justice, said some DACA recipients are worried that personal information they gave the government when they enrolled in DACA now could be used to target them or relatives for potential deportation.

“There’s a lot of uncertainty and fear. A lot of folks are uncertain about what happens if the program ends,” Simpson said.

Cece, a 33-year-old Microsoft employee in Washington state who spoke on condition of being identified by just her first name, said DACA paved the way for her to work for the company as a security and service engineer. She moved to the United States with her mother from Mexico when she was 4 years old and now has a 9-year-old son who is a U.S. citizen.

When Trump announced his plan to end DACA, “I remember feeling like my dream had ended,” she said.

Colleges and universities including the University of California system – which has around 1,700 “Dreamers” enrolled – also oppose Trump’s move.

Trump’s administration has argued that Obama exceeded his constitutional powers when he bypassed Congress to create DACA.

Trump’s supporters, including 13 conservative states led by Texas, agreed. They argued that the program imposes costs on states by forcing them to provide services for DACA recipients such as healthcare, education and law enforcement.

“This case thus directly implicates the states’ effort to bring about an orderly end to DACA and threatens to continue the numerous harms inflicted on the states by this lawless program,” lawyers for the states wrote in court papers.

Because lower courts have ruled against Trump, DACA remains in effect and people already enrolled in the program can get renewable two-year work permits. The administration has refused to approve new applications. It said it has issued more than 473,000 renewals since January 2018.

Obama created DACA by executive action after Congress failed to pass a bipartisan immigration policy overhaul that would have provided a path to citizenship to young immigrants brought by their parents into the country illegally as children.

Obama and DACA advocates have said the people protected by it were raised and educated in the United States, grew up as Americans and often know little about their countries of origin.

Trump has given mixed messages about the young immigrants protected by DACA. He said in 2017 that “we love the Dreamers” but then moved to kill the program and has never proposed a detailed replacement.

If the court rules in his favor, “the Republicans and Democrats will have a DEAL to let them stay in our Country, in very short order,” Trump said in a Twitter post on Oct. 9, without explaining the nature of such a deal.

The Democratic-led House of Representatives this year passed a bill that would protect “Dreamers.” The Senate, controlled by Trump’s fellow Republicans, has shown no sign of approving it.

Abarca is not confident that Trump’s administration will ultimately protect people in her position.

“They are saying they want to support ‘Dreamers’ but at the same time they are saying you are not welcome,” Abarca said. “It doesn’t make sense.”

Reporting by Lawrence Hurley; Additional reporting by Mica Rosenberg; Editing by Will Dunham