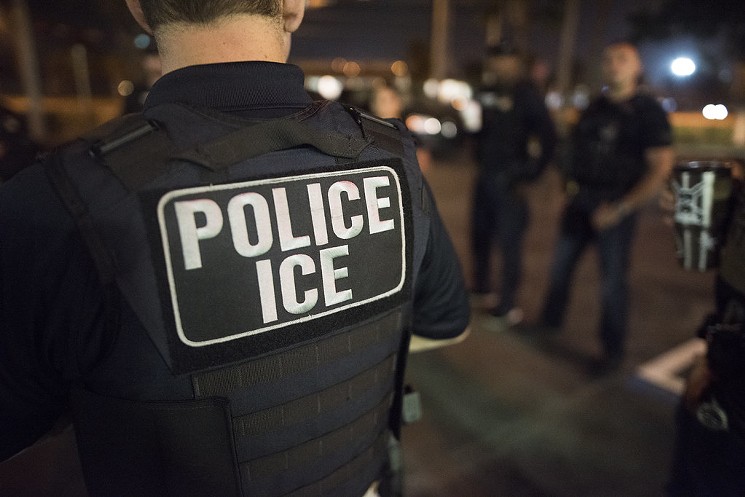 Ron W. didn’t know what had landed him in solitary confinement until he heard the word “obstruction.”

While waiting in line for his medication at the Monroe County jail in Key West, he began to sing Bob Marley’s “Redemption Song.” In response, Ron was disciplined for “obstructing the pill line” and sent to isolation for 16 days.

A nurse tried to tell guards at Monroe they couldn’t take him because of his elevated blood pressure, but they reportedly ignored her. Ron’s isolation cell was so full of mildew, he developed fungus on his skin and scalp and had to cut off his hair. The cream Ron was given to treat the fungus burned his scalp, leaving it red and raw and requiring more medical attention. During his 16 days in solitary, he was allowed two showers.

Ron is one of more than 100 immigrant detainees interviewed by advocates and attorneys who say the Monroe County jail, which contracts with Immigration and Customs Enforcement (ICE), has a problem with what they consider extreme, sometimes arbitrary isolation of detained immigrants.

The Southern Poverty Law Center (SPLC) and Americans for Immigrant Justice analyzed conditions and policies at four immigration detention centers in Florida — the Krome Service Processing Center in Southwest Miami-Dade, the Broward Transitional Center, and the Monroe and Glades County jails. The organizations toured the facilities and gathered information from interviews and public records requests. They published their findings earlier this month in a report titled “Prison by Any Other Name.” Many of the detainees named in the report, including Ron, are identified by pseudonyms.

The report calls out a system of substandard medical care, detainee deaths, inadequate mental health services, use of force, abuse of segregation, and a lack of accommodations for detainees with disabilities across all the facilities. The Monroe County Sheriff’s Office, which operates the Keys jail, has had an intergovernmental service agreement with ICE since 1997, according to SPLC. On any given day, 26 percent of people in immigration detention at Monroe are held in segregation, the report says.

“Despite treatment that is inarguably punitive, people held in immigrant prisons are considered to be in civil proceedings and do not receive a lawyer at government expense,” the report says. “This means many detained people don’t have an advocate when they encounter these conditions.”

“I strongly disagree with the unverified information and claims by this report that appear to be solely based on self-reporting. Our facility is nationally and state accredited,” he wrote. “The public should know that I take the safety and health of everyone detained in our facilities very seriously, as our accreditation status and those I keep on my staff so reflects.”

Advocates say conditions in remote detention centers such as Monroe can feel starker to immigrant detainees. Located more than 150 miles from Miami, the jail has limited access to immigration attorneys and other resources. The report describes detainees’ recreation area as a small courtyard adjacent to their housing unit, “about a quarter of the size of a basketball court, with high walls and meshed wire overhead.”

“It’s a cage, basically, with some open air above,” says Shalini Goel Agarwal, a senior supervising attorney for SPLC.

Visits from family or friends can be scarce because of the distance and costly because it’s Key West. Finding accommodations and paying for food in a tourist town can be cost-prohibitive for people who might already be burdened by a family member’s detention. When detainees do have visitors, they can’t see them face-to-face and instead must talk via video chat.

The report says some of the detainees interviewed had diagnoses of depression, bipolar disorder, anxiety, HIV, diabetes, and various disabilities. Even communication with medical and mental health professionals is done via video.

In the report, detainees such as Ron recount instances of isolation or neglect that resulted in injuries or death.

One day in December 2018, Leslie C., a 31-year-old man from Haiti, heard banging noises coming from a friend’s nearby cell. The friend, known as Papi, used a wheelchair and had a history of strokes. Papi’s earlier pleas for a guard to take him to the sickbay went ignored. Leslie reported the banging sounds to no avail and later found his friend dead in his cell, the report says.

Leslie says in the report he sometimes experienced days of isolation at a time. He became a member of the jail’s trustee program, which requires detainees to do custodial work in exchange for extra food or having an unlocked cell during lockdowns. Leslie reportedly joined the program so he could get more time out of his cell.

Being jailed, isolated from family, and confined to a dorm for most of their days compounds that trauma. She says understanding trauma and how detention can affect or aggravate a person’s mental health is necessary.

Another Monroe detainee, who had been sexually assaulted at the jail, pleaded with guards to keep him in protective custody, the report says. Desperate and afraid of returning to general population, he attempted suicide in the dorms. When the guards found him, they reportedly pepper-sprayed him, punched him in the face, and took him to a shower to hose him down.

“Men in detention told us that when people are suicidal, guards resort to pepper spray, further traumatizing individuals,” the report says.

The report makes recommendations to improve conditions at immigration detention facilities, including expanding public records laws to apply to private detention facilities and ending all enforcement programs and partnerships between local governments and ICE. SPLC says it considers these programs dangerous and a liability, as evidenced by allegations that the Monroe Sheriff’s Office tried to deport a U.S. citizen last year.