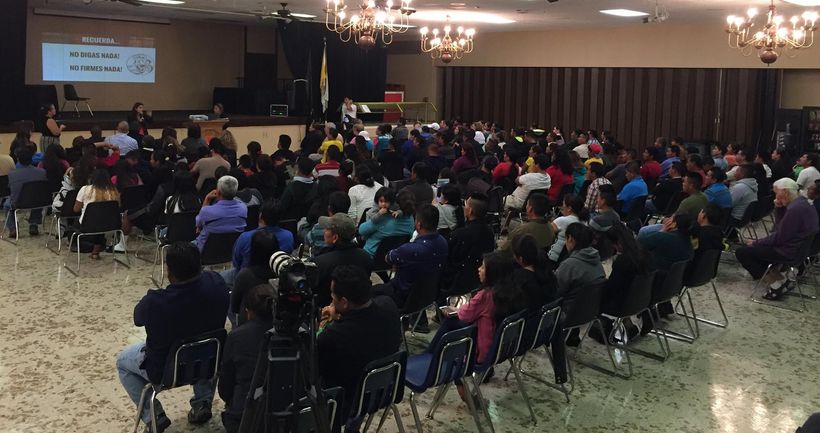 In the past few days, we have heard our new President deliver on many of his promises: close the border, create a massive “deportation force,” ban Muslims from entering our country. The latest blow came yesterday when Miami-Dade County Mayor Carlos Giménez ordered county jail officials to keep immigrants jailed until Immigration and Customs Enforcement (ICE) officials pick them up. This decision flies in the face of a 2013 resolution unanimously passed by our County Commissioners. Mayor Giménez said he reversed course after Trump signed an Executive Order threatening to cut funds to “Sanctuary Cities.”

The County’s cooperation with ICE during the Obama administration led to the deportation of an unprecedented number of immigrants with no criminal history or minor traffic violations only. It cost County taxpayers $12.5 million a year. Countless families were torn apart. The fallout of mass deportations nationwide has been devastating, especially for vulnerable children, many of whom ended up in foster care following their parent’s removal.

In our report, written in conjunction with Florida International University’s Research Institute, False Promises: The Failure of Secure Communities in Miami-Dade County, we analyzed 2000 arrest records and told the stories of immigrants stopped by local police and turned over to ICE by County officials. Stories like Alberto’s, who was arrested for driving without a license and transferred to Miami’s Krome Detention Center where he was not allowed to contact his wife to inform her of where he was or what had happened to him. His wife, Marta, said:

“This is the hardest thing that my family has gone through. I don’t wish this experience on anyone, not even my worst enemy. I can’t sleep at night. My children can’t sleep at night. My children who went from straight A students are now failing their classes because they can’t focus. My youngest son has a hard time eating and is going through such severe depression that I’ve had to put him under psychiatric care.”

Marta and Alberto were homeowners and have four children, two are U.S. citizens.

The majority of Miami’s residents are immigrants and Mayor Giménez’s decision has sent shock waves through our community and beyond. And it will make our community less safe, as immigrants increasingly fear reporting crimes to law enforcement.

Trump’s anti-immigrant executive orders this week included calls for renewed cooperation between local police and ICE. Programs like this are far reaching, disrupting and tear apart honest and hardworking families. In a climate that encourages overzealous policing, elaborate dragnets often employ racial profiling. Although many police chiefs are opposed, such agreements are also increasingly attractive to many sheriffs who see this as an easy way to mollify angry constituents.

For years ICE detainees have been the fastest growing prison population in the country. During Obama’s tenure, this population skyrocketed and a record 2.4 million immigrants were removed. The alarming increase in ICE detention is in part due to a 2009 Congressional mandate, appropriating funds every year to maintain at least 34,000 immigrant detention beds daily, at a cost to US taxpayers of about $2 billion a year. No other law enforcement agency has quotas for the number of people it must jail. With good reason.

The real beneficiaries of the bed mandate are county jails and to a larger extent the private prison industry, whose two largest contractors, the GEO Group and CoreCivic (formerly Correctional Corporation of America), have seen their stocks soar in recent years. Not surprisingly, for-profit businesses have spent millions lobbing Congress to keep the quota.

Over the years, AI Justice has provided ample evidence that the barrage of anti-immigrant laws and regulations, often propelled by racist rhetoric, is an assault on the fundamental civil liberties of all. Our research also makes clear that driving immigrants further underground does nothing to fix our broken immigration system. It only makes matters worse.