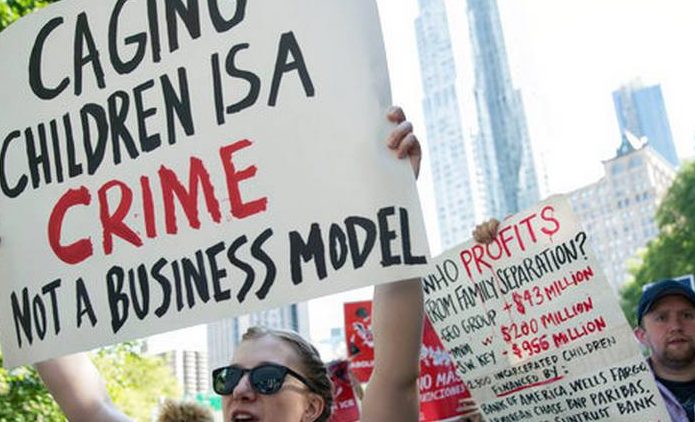 Due to the threat of drug cartels, extreme poverty, gang violence, and other safety concerns, tens of thousands of parents and children have crossed the U.S.-Mexico border illegally in recent years. Recently, former policies, the Trump administration, and other factors have led to a catastrophe that is the cause of over 2,300 children being separated from their parents.

It began in 2008 when Former-President George W. Bush signed a law calling for unaccompanied minors crossing the border to be released into the “least restrictive setting.”

By 2014, then-President Barack Obama faced an influx of children and families attempting to enter the U.S. His administration housed the families in special detention centers but since the arrangement violated an agreement that barred kids from jail-like settings, they were released pending notification of their next court date.

Trump, along with Attorney General Jeff Sessions, also insisted that people were purposefully traveling with children to ensure they weren’t jailed.

In response, the Trump administration launched a “zero tolerance” policy on the southwest border on April 6, 2018. According to USA Today, it directs federal prosecutors to criminally prosecute all adult migrants entering the country illegally. The policy change leads to the separation of families because children cannot be held in a detention facility with their parents.

“One of the main factors is the lack of comprehensive immigration reform,” said Saman Movassaghi Gonzalez Esq., the Managing Attorney at Florida Immigration Law Counsel. “The laws that we have right now regarding immigrants and foreign nationals coming to the United States are not up to the current situation that we are dealing with.”

Throughout May 2018, the Trump administration defended their actions. Sessions defended the policy by citing a biblical passage and U.S Secretary of Homeland Security, Kirstjen Nielsen, insisted that children will only be separated if the adult has broken the law. But crossing the border without proper documentation is crime which is used as reason for a separation.

Confusion was also caused since there were multiple government agencies involved: Customs and Border Protection, part of Homeland Security, detains immigrants. Health and Human Services is responsible for caring for children. Adults are referred to the Justice Department for prosecution. Then, the adult immigrants are detained by Immigration and Customs Enforcement.

“I think that immigrants, like working-class Americans, like Muslims, like transgender people, like women, are all under attack by the abuses of power and dehumanization of the Trump administration. The administration has continued to give more power and wealth to the top 1% of this country at the expense of U.S. tax-payers,” said Isabel Sousa-Rodriguez, Director of Membership and Organizing for the Florida Immigrant Coalition.

Children were being sent hundreds of miles away from their parents and parents were unable to access hotlines to help them find their children.

“The issue of family separation is not only a border issue,” said Jennifer Anzardo Valdes, Director-Children’s Legal Program at Americans for Immigrant Justice. “Many of the children were transferred to Florida. These children regardless of their age will have to navigate the complex immigration system alone.”

Various accounts of children emotionally distraught have been publicized, including audio leaked of heartbreaking voices of small children crying out for their parents at a U.S. immigration facility.

“These children are going to have trauma from this experience for a very long time. Many of them were separated without being able to say goodbye to their mother or father. They had no idea where they were going or where their mother or father was going,” said Valdes. “We are currently representing an 8 year old who tearfully describes to us the way his father was thrown on the ground and stomped on by five immigration officials. It is evident that he is haunted by this memory.”

Trump has repeatedly said Democrats are to blame. However, they only seem to be using the issue to build support and detour Republicans as the midterm elections approach.

On June 20, Trump signed papers that stopped separation. However, the Flores consent decree requires release of children within 20 days. The problem is that under zero tolerance the government is criminally charging adults so their cases generally take far more than 20 days.

On June 25, Trump’s executive order was reported to have temporarily halted criminal prosecution of parents and guardians unless they had criminal history or the child’s welfare was in question. However, the White House’s zero tolerance policy remained intact.

The following day, U.S. District Judge Dana Sabraw in California ordered U.S. immigration authorities to reunite separated families on the border within 30 days and for children younger than 5 within 14 days.

While officials insist they know where all the children are, there has been no clear plan on how families will be reunited. Reports indicate that about 500 children were already returned to their parents, but those never made it out of Border Protection custody.

“It’s heartbreaking. Our youngest client right now is 3 years old!” said Valdes. “The children often ask us if they are going to see their parent again. In many of our initial meetings the child just cries.”

Nevertheless, Trump continues to advocate immediate removal, without an appearance before a judge or other due process.

“Many of these families are being turned away at the port of entries and out of desperation crossing the border and flagging down immigration officials to request asylum,” said Valdes. “They have a right to due process – a right to have their claims for asylum heard.”

According to reports from The L.A. Times, several commercial U.S. airlines have opted out from transporting undocumented children to detention centers. These include American Airlines, United, and others.

Meanwhile, Volaris, a low-cost carrier that flies to Mexico and Central America, offered to help transport the children back to their homelands for free.

From refusing to send National Guard resources to filing lawsuits against the government, several states in the U.S. are also working toward justice for these undocumented families.

Additionally, many organizations and groups are coming together to help these families, former first-ladies have spoken out against it, and protests have been taking place in states across the country.

Hundreds of thousands from across America marched on Saturday, including here in Orlando, Florida, demanding that the families be reunited.

“We have been in partnership with CAIR Florida to raise awareness in the community,” said Sousa-Rodriguez. “We believe every person deserves to stay living in the countries they are from, but to do that we must change U.S. foreign state and economic influences in those countries.”

Most of these children are being detained in states like Texas, Michigan, New York and Virginia.

“It’s a very frustrating and tragic situation that is going on right now,” said Gonzalez. “If people are upset they need to have their voices heard, they need to go out and vote.”

Read it via The Orlando Times here.